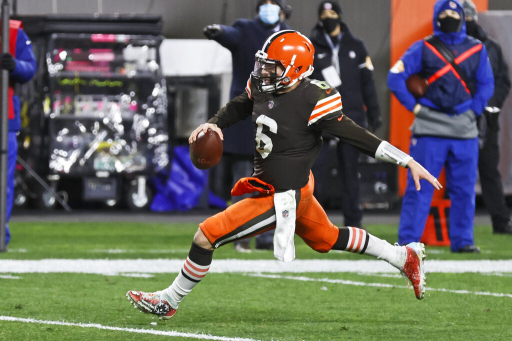 Sunday Night Football in Week 15 of the NFL season features the Cleveland Browns (9-4) at the New York Giants (5-8). The Browns are -6.5 in the prime time showdown. The number shouldn’t be surprising considering the level of talent separating the two teams.

Odds for Giants vs Browns

The Giants have quarterback Daniel Jones listed as questionable, if he can’t go it would be another start for veteran backup Colt McCoy. Evan Engram, one of the team’s best offensive weapons, is also questionable to play. An already bad offensive line has been beaten up all season, missing multiple players that were supposed to be starters.

For Cleveland, there’s also a number of impact injuries. Both of the team’s top tight ends, Austin Hooper and David Njoku, are listed as questionable. Denzel Ward is probable, helping boost the Browns secondary against a bad Giants passing attack.

Regardless of who is under center for the Giants, it isn’t much to get excited about. The two quarterbacks have combined for nine touchdowns and ten interceptions so far this season. Last week against the Cardinals, they were sacked eight times for 64 yards, leading to the team having just 81 net passing yards on the day. The week prior, they ended with 100 net passing yards.

The offense for the Giants is brutal, regardless of who’s throwing the ball. On the season they’re averaging 1.2 points per drive, ranking 31st in the league. They also rank 31st in the NFL in first downs gained, leaving their defense in bad spots on a consistent basis.

Meanwhile, the Browns have been rejuvenated under head coach Kevin Stefanski. They have one of the best rushing attacks in the game with a dominant one-two punch in Nick Chubb and Kareem Hunt. Hunt has 772 yards on the season with a 4.4 average per carry. Chubb, who has missed four games, has 881 yards behind 5.9 yards per carry.

They rank 4th in the NFL as a team in rushing yards and rushing attempts. Baker Mayfield has valued ball security and moving the chains, helping the team ride their two dominant backs. He has 8 interceptions on the year, compared to the 21 he threw last season. Cleveland eats up the clock with their run game, wearing down opposing defenses and keeping their own defense off the field.

Betting the Browns vs. Giants

The against the spread numbers aren’t ideal, but everything else points toward a dominant Browns performance. They come off a brutal loss to the Ravens, a game that ended 47-42. That was their second straight game putting up 40+ points and their third time doing so on the season.

The Giants have gone over 30 points just once, in a Week 5 loss to the Dallas Cowboys.

The Browns backfield will wear down the Giant’s defense with the help of the Giants lackluster offense. It’s a terrible combination for the Giants in opponent strength running the ball, and their own non-existent ability to have sustained drives.

Take the Browns with the points.

After extending their hot and San Diego’s cold streak, the Seattle Mariners will be looking to leave Petco Park with a two-game sweep as they take on the Padres this afternoon. Yesterday, the Mariners pounded out a dozen hits and plated eight runs, and Chris Flexen pitched 6.2 shutout innings to collect his third straight END_OF_DOCUMENT_TOKEN_TO_BE_REPLACED