As NFL Training Camps Opens, Where is the Smart Money Going to Win the Super… 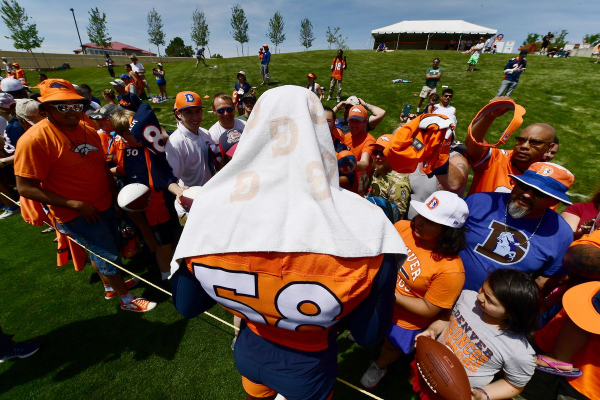 For most NFL fans, the beginning of football is 45 days away when the Packers will visit Chicago to take on the Bears in the NFL kickoff game on Sept. 5. For the players themselves, football starts now as NFL training camps are opening across the league. NFL rules state that teams can’t begin full training camp until 15 days before their first preseason game, which means some teams have gotten started while others are still days away.

For example, the Broncos and Falcons play in this year’s Hall of Fame Game – the first preseason game – which is on Aug. 1, meaning those clubs were able to start training camp on July 17. In contrast, the Cowboys don’t play a preseason game until Aug. 10, meaning they can’t start camp until July 26.

Either way, it’s time to get excited for football season once again after another long offseason. And a large part of the preparation for many fans of the game includes placing bets on who they think will be lifting the Lombardi Trophy at the end of the year. So, let’s take a look at where the sharps are putting their cash.

First of all, how do we find where the smart money is going?

When it comes to sports betting, you have the square bettors, or public, and the sharps, who are professional bettors with a large bankroll making relatively large bets. The sharps betting the smart money generally do significantly more and better research than a casual bettor, and thus have much better long-term expectations for their results.

Following the smart money is a great idea for any bettor, but identifying where the sharps are placing their bets is its own science. To do so, look for line movements occurring against the higher percentage of bets. For example, if 75 percent of bets are coming in on the -7 Jets, but the line either holds or moves to -6.5, you can deduce that the large wagers of the sharps on the underdog Dolphins are moving the line opposite where the vast majority of bets should push it.

Remember that sharps also like to pound underdogs getting a bigger number than they think the team should, so they also tend to wait on the public to bet big on the favorite and push the number even more in favor of the dog.

Who Does the Smart Money Say is Going to Win Super Bowl LIV?

Although we’re still several weeks from the official start of the NFL season, there’s already been plenty of movement on NFL futures since the lines opened. So, while it’s perfectly fair to expect many sharps to come in late and hit favorable odds that are being pushed higher by the public right now, we can also look at where sharps may have been placing their early bets by seeing which teams are looking at tighter odds now versus the open.

So, while a favorite like Kansas City opened at +700 to win the Super Bowl and now sits at +800, showing that sportsbooks are trying to encourage more action on teams like that, a fast drop from +3300 at the open to +1400 for the Browns could reveal a hefty amount of smart money being played on Cleveland right away.

A similar team to Cleveland is Indianapolis, which opened with a line of +1900. Now, the Colts are in the +1200 to +1400 range depending on the book, which shows that plenty of cash has been placed on Indy already, and the sharps have the deepest pockets. Both plays make plenty of sense from a football perspective.

The mixture of a healthy Andrew Luck and a dominant run game turned the Colts into one of the most dangerous playoff teams just a year ago. And with the addition of Odell Beckham Jr. to a roster already filled with young talent, many experts like Cleveland to take a huge leap forward this year.