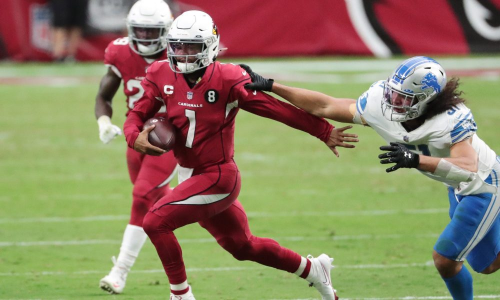 For just the 13th time since 1972, the Arizona Cardinals and Miami Dolphins will be playing each other. Kickoff is set for 3:25 on Sunday (11/8) in sunny Miami, Florida.

As the most anticipated rookie quarterback from last year plays against the most anticipated rookie QB in this year’s class, all eyes will be looking at the two similar QB’s as they face off for the first time since the 2018 Orange Bowl. These two are very familiar with each other. One of the closest Heisman races in recent history as Kyler Murray beat out Tua Tagovailoa to claim the trophy. Murray will be seeking revenge after the tough loss in the Orange Bowl, while Tagovailoa will be seeking revenge after getting the Heisman Trophy taken from under his feet.

The Arizona Cardinals will be well-rested and prepared for this game as they come off their bye week. With a record of 5-2, the Cardinals are 2nd in the NFC West behind the Seahawks, who they beat in OT two weeks ago. The Cardinals are proving to be a playoff contender this year with wins over San Francisco, Washington, NYJ, Dallas, and Seattle. With a balance of offense and defense,

Miami is surprising NFL fans across the world as they are the #2 team in the AFC East as the Patriots have seemingly imploded this season. The Dolphins are 4-3 this season with wins over Jacksonville, San Fransisco, NYJ, and most recently, the Los Angeles Rams. The Dolphins shocked fans and the NFL community after the decision to name rookie QB Tagovailoa, the starter, over Ryan Fitzpatrick last week.

Why the Cardinals cover: Although Tua seems to have a magical spark about him and can lead this team to great heights, the Dolphins defense will not be able to hang around with the Arizona offense. In his sophomore season, QB Kyler Murray is leading his team to their best start since 2015. Murray has found the endzone a total of 20 times this season (13 passing, 7 rushing). In his breakout season, the QB is averaging 326.3 YPG in the air and is the team’s second-leading rusher with 62.4 YPG.

In this game, we will be seeing a great defense matchup with an all-out offense. The defensive unit is only allowing 18.6 PPG, which is good for the #1 spot in the league. BUT they haven’t faced a team with the offensive firepower the Cardinals have. Despite allowing so few points, the team is allowing 125.1 YPG on the ground and 250.9 YPG in the air, which the Cardinals will be able to exploit using DeAndre Hopkins and Christian Kirk as well as Kenyon Drake and Kyler Murray on the ground.

I think this game belongs to the Cardinals and is theirs to lose. Even though the Dolphins are riding high after their win against the Rams, Arizona is coming off a bye week and a bigger win against the Seahawks. With a dominant offense averaging 258.4 YPG through the air and a league 2nd best 160.7 on the ground, the Dolphins defense will not have an answer.

This is the second-lowest total the Cardinals have faced this year and the third-highest for the Dolphins. Arizona has gone 4-2-1 to the under while Miami has gone 5-2. Both teams are averaging high numbers of PPG, with the Cardinals hitting 29 and the Dolphins scoring 26.9 points each game, and their defenses are allowing league-leading lows. Looking at the previous games each team has played, the numbers show this should not be a very high scoring game. But because the dolphins haven’t matched up with a dual-threat QB like Kyler Murray, I believe this game might be slightly over the proposed amount from DraftKings.