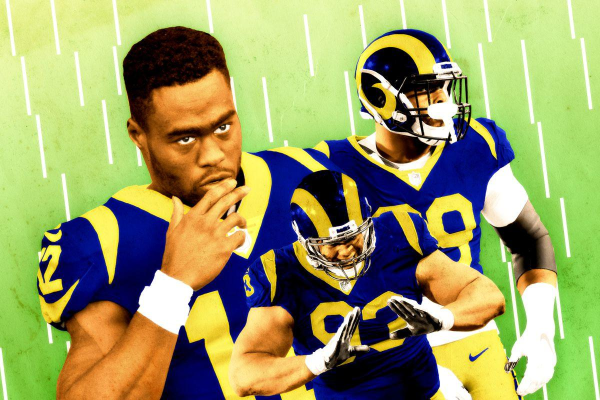 Sunday is finally the big day as it is Super Bowl LIII. The Patriots are looking for ring number 6 in the Brady-Belichick era. Still, while much of the focus has been on the Patriots, the Rams aren’t a team to be forgotten. Yes, many people believe that the Rams didn’t deserve to beat the Saints, but at the end of the day, it will be L.A. heading to Atlanta to take on the Patriots. So despite the naysayers, here are 5 reasons to bet on the Rams on Sunday:

In the AFC championship game against the Chiefs, the New England Patriots had a field day against their defense. Throughout the regular season, the Chiefs ranked as one of the worst defenses in the league, although they did actually have success in getting to the quarterback. Still, through a clever gameplan of utilizing the backfield of Michel, White, and Burkhead, as well as the short passing game to Edelman, the Chiefs did not have the success they were wanting in terms of getting to Brady.

While the Chiefs had some success this season, they don’t have players like Donald and Suh. Aaron Donald is arguably the best defensive player in all of football and his stats backed it up this season. He had 59 tackles and a whopping 20.5 sacks. For Suh, he added 59 tackles and 4.5 sacks. Between their ability to stop the run game and get to the quarterback, this defense will be a whole lot different than the one the Patriots faced a couple of weeks ago.

Interestingly, reports came out earlier this week suggesting that Bill Belichick and Sean McVay have stayed in contact pretty regularly throughout the season. It is not surprising then that some look at this matchup as a “passing of the torch” from Belichick (old school) to McVay (new school). At only 33 years old, McVay has transformed the Rams into a legitimate contender, and if anyone can outwit Belichick in the biggest game of the season, it might just be McVay. I certainly expect him to try to exploit the Patriots’ defensive weaknesses (mostly their front and linebacking core as their secondary is pretty darn good) and if he can make the adjustments throughout the game to keep up with Belichick, McVay might just bring home a championship to L.A.

Rams Offensive Unit As A Whole

Admittedly, in the NFC Championship game, I am not sure where Todd Gurley was. He only rushed 4 times for a total of 10 yards, although one of those rushes resulted in a touchdown. He also only caught one pass for 3 yards. Instead, the Rams opted to ride CJ Anderson, a late-season addition who filled in for Gurley while he was injured towards the end of the season. Anderson didn’t have too much luck either, rushing 16 times for only 44 yards.

Still, when healthy, Todd Gurley is the most dynamic running back in all of football. This season, he rushed for 1,251 yards and 17 touchdowns while also adding 59 catches for 580 yards and another 4 touchdowns through the air. Given that the Patriots’ linebackers aren’t the most fleet of foot, if the Rams can get Gurley going in the passing game, he could pay big dividends. Throw on top of that the fact that Gurley has not shown up on the injury report at all this week and it seems like he should be all systems go. If he can get it going against the Patriots, he could be the difference maker.

Rams Are The Underdogs (+3)

When betting the spread, it is important to look at the past. Yes, in the Tom Brady era, the Patriots have been historically dominant, winning 5 of their 8 Super Bowls. The thing, though, is they have never blown any of those 5 teams out. In those 5 Super Bowl wins, three have been by only 3 points, one by 4 points and one by 6 points. In other words, when looking at the spread, it isn’t farfetched to think that a number as low as 3 could still have an impact in the outcome. Throw on top of that the fact they have lost 3 Super Bowls in that same span, and I feel relatively comfortable betting the Rams at +3. Yes, it is Brady and Belichick, and yes, the Rams will have to be darn near perfect to win, but if betting the spread, you may not need them to win to still come out ahead.