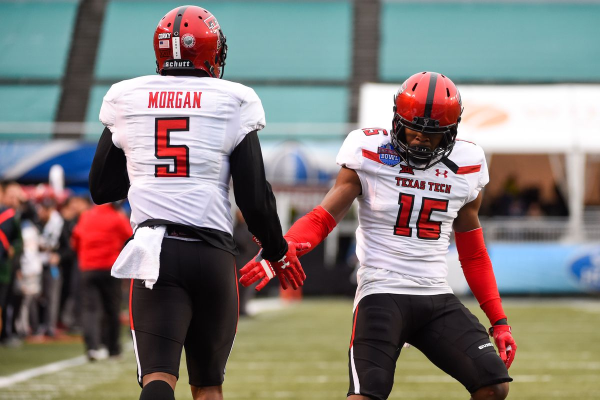 At 3-2, both TexasTech and TCU were hoping for better starts to their seasons.  Still, around only the halfway mark of the season and both with winning records, they will both hope to make a strong push and play meaningful games come Bowl season.

The two will meet up Thursday night when the Texas Tech Red Raiders travel to Amon Carter Stadium to take on the TCU Horned Frogs. This matchup of Lone Star State college teams features the battle for the Saddle Trophy, a tradition that initially started in 1961.  Kickoff is scheduled for 7:30 pm ET.

The spread for this one comes in with TCU being 7-point favorites at home.  The over/under for total points scored sits at 61 points.

Texas Tech Looking To Add To The Win Column

Despite being just 3-2, Texas Tech is actually the nation’s leader in total offense.  They average about 592 yards of total offense and are ranked second nationally in passing offense (408 per game) and eighth in scoring offense (48.4 points per game). Quarterback Alan Bowman leads the Red Raiders.

On the season, he has 1,680 yards passing and 11 touchdowns. On the receiving end, Antoine Wesley and Ja’Deion High lead all receivers. Wesley has 621 yards and 5 touchdowns while High has 406 yards and 2 touchdowns.  On the ground, Ta’Zhawn Henry leads the way with 261 yards on 54 carries and 7 touchdowns. Demarcus Felton is right behind with 226 yards on 45 carries and 4 touchdowns.

This will be the 61st time the two teams have met and the Red Raiders currently lead the series with a 31-26-3 record.  Texas Tech and TCU have split the last 6 meetings, though..

TCU Trying To Show They Are For Real

Yes, TCU has two losses.  However, both of their losses have come to top-10 programs in the country.  Ohio State is currently ranked 3rd in the country while Texas is ranked 9th.

Offensively, they are led by quarterback Shawn Robinson.  On the season, he has 1,023 yards passing, 7 touchdowns and 6 interceptions.  Jalen Reagor and KaVontae Turpin are Robinson’s go to receivers. Reagor has 359 yards receiving with 2 touchdowns while Turpin has 228 yards and a touchdown.  On the ground, the Horned Frogs are led by Darius Anderson (316 yards, 2 touchdowns) and Sewo Olonilua (262 yards, 1 touchdown).

Where TCU really shines is in their defense.  They currently rank 12thin the nation and lead the Big 12 in total defense.  They are allowing just 300.3 yards per game and opponents are averaging only 20.8 points per game.  Ultimately, with a high octane offense in Texas Tech and a shutdown defense in TCU, something is going to have to give.

This one is a tough one to predict.  You have an elite defense with an average offense going up against an elite offense with an average defense.  Ultimately, I like TCU to win this game outright. Their only two losses have been against nationally ranked teams and at that, they played both relatively tough.  Despite that, I do think Texas Tech’s offense will keep them in the game. As a result, I like TCU straight up, but when betting the spread, I am taking Texas Tech to cover.

After the Novak (or Novax?) Djokovic visa saga dominated pre-tournament headlines, we can finally look forward to some on-court headlines as the Australian Open gets underway. Djokovic news has taken the focus off of the tournament, which is certainly understandable. After all, the fate of the world number one and top seed would significantly impact END_OF_DOCUMENT_TOKEN_TO_BE_REPLACED