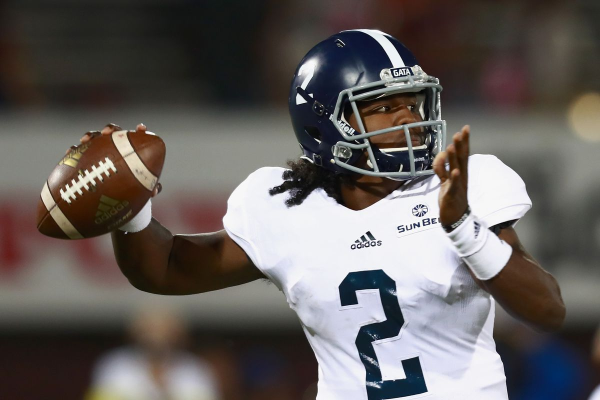 Georgia Southern comes into the game after suffering a tough 28-14 loss against a ranked Coastal Carolina team. The game was tied at halftime 14-14, but the Chanticleers scored two touchdowns in the 4th quarter and walked away with a victory. Coastal Carolina was able to slow down the Eagles rushing game, allowing only 119 yards on 37 carries for a 3.2 yard per carry average. In their previous three games, Georgia Southern had averaged 280 rush yards per game, but Coastal was able to quell the Eagles strong rushing attack and force them out of their game plan.

South Alabama is currently on a two-game win streak after their 38-14 win over a winless Louisiana Monroe team. The Jaguars came out of the gates fast, as they led 17-0 after the first quarter before allowing UL-M to creep back in at the half 17-6. From there, the Jaguars dominated 21-8 in the second half as they picked up their second conference win. WR Kawaan Baker led the way with 6 catches for 154 yards and 3 touchdowns, including an 80 yarder in the first quarter.

Currently, DraftKings lists Georgia Southern (-4.5) as the favorites with the total posted at 50.5.

Defensively, the Eagles are the 22nd ranked scoring defense as they only give up 20.8 PPG. However, this stat is a little misleading as they have allowed almost a whole touchdown more with 26 PPG in conference games. They rank 30th in rush defense and 50th in pass defense as they allow almost 240 passing yards per game.

South Alabama ranks just below the Eagles with 26.8 PPG and allows 24.8 PPG. The Jaguars average 270 Passing Yards(28th in the nation) and 136 Rush Yards per game, and rely on their two QB system to move the ball down the field. In their three wins this year they have averaged 442 yards per game, generally with a pretty good balance of pass/rush yards. Carlos Davis is the leading rusher with 97 carries for 443 yards and 2 touchdowns.

The two South Alabama Quarterbacks Chance Lovertitch and Desmond Trotter have had an equal shot at the majority of play for the Jaguars. Lovertitch (44-78, 56%, 607 yards, 5TDs/2INTs) has seen less play of late though compared to Trotter (46-69, 66.7%, 744 yards, 6TDs/2INTs). It was Trotter who threw for 3 touchdowns last week vs. UL-M, while Lovertitch went 3-5 for 62 yards and a pick. Look for Trotter to once again demand more snaps.

King On The Run

Eagles RB JD King (87 carries, 490 yards, 5.6 yards per carry, 4 TDs) is currently 29th in the country in average rushing yards per game with 98. The Georgia Southern offense will live and die with their success on the ground. Almost 75% of their plays are runs, and they rely on their rushing attack to wear down opposing defenses. King is currently on pace to set career highs in rushing yards, rushing TDs, and rush attempts. As long as the Eagles can remain within striking distance and don’t fall too far behind, they will continue to run the ball game in and game out.

Despite their unconventional approach to the passing game, the Jaguars have two receivers ranked inside the top 30 for average receiving yards per game. Both Jalen Tolbert (26 catches, 486 yards, and 4 TDs) and Kawaan Baker (27 catches, 443 yards, and 6 TDs) haven’t seen their production decrease so far this season. Baker is coming off his best game of the season (6 catches for 154 and 3 Tds) while two weeks ago it was Tolbert (9 catches, 91 yards, and 1 TD) who led the way in a win over Texas State. Look for the Jaguar offense to once again rely on one of these two stud receivers to lead the way vs a dismal Georgia Southern pass defense.

While the total is really tempting because of how slow these two teams are, I’m going to go in a different direction. I think South Alabama has figured out what they do well and will continue to take shots with both Baker and Tolbert. Georgia Southern really struggles vs the pass, and if the Jaguars get out to a double-digit lead, it will force the Eagles to throw more than they are comfortable doing. I’m taking South Alabama to cover the 4.5.