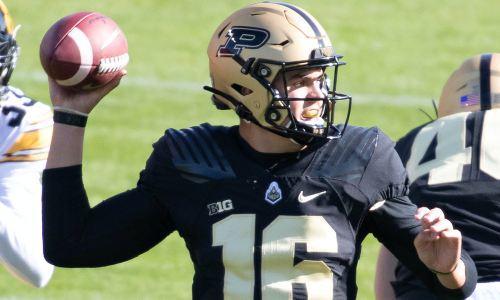 Purdue University, aka the Boilermakers, is preparing for their first away game this season as they take on the University of Illinois, aka the Illini. The kick-off for the game is on Saturday, October 31st, at noon. Currently, both teams lie on the west half, a conference of the big ten. The big ten conference is split into two halves after all the teams have one match each.

Purdue University is in a three-way tie for number one in the west after earning a victory in their season opener. On the other hand, the University of Illinois is in a four-way tie for number four in the west. There is a lot of history to go by with both of these teams, and they have played each other every year since 2000. The most recent game between the two ended with the Illini emerging victorious courtesy of a 24-6 scoreline.

Purdue University earned its first win in the season opener since 2016. However, the win was achieved with the team missing a few key pieces. Jeff Brohm, the team’s head coach, was missing from their first game of the season at home. The coach had previously tested positive for the coronavirus and subsequently had to self-isolate for a certain period. The coach is expected back with the team by the 27th. The team was also missing the star talisman, Rondale Moore. His reasons for missing the game were never disclosed, though. Moore had managed a total of 114 passes for 1258 yards in his first year with the team, and the Boilermakers will be hoping to have him back for the game with Illini.

In their season opener, Purdue had to come back from behind to win it. They managed to get a scoreline of 24-20 at the final whistle against the Iowa Hawkeyes. Their total yards were 386 while their passing was at 282 and rushing at 104. On the 3rd down efficiency, they were 6-16 while their first downs were at 24. Among the Big Ten in passing yards per game, the team ranks at number two. David Bell has filled the shoes of Moore perfectly well and is the team’s top receiver. He ranks at 3rd in the Big Ten and is number one in the team after his 129 rushing yards than he managed in the season opener.

Coming into the 2020 season, the Illini had great hopes of performing better. They boasted an experienced team of seniors and a somehow solid 2019 season. They had finished 4th in the Big Ten West even though they had posted some impressive wins that made the team look promising. However, they posted abysmal stats both defensively and offensively. In their season opener, they played against the Wisconsin Badgers and were outrun in every department.

The team’s only score came from a fumble return for a TD, and by the blow of the final whistle, they were 45-7 down. The Illini managed some 218 total yards with 131 rushings and a disappointing 87 passing. The only possession they managed in the game was a 16:32 with eight first downs, a third-down efficiency of 2-10, and fourth –down the efficiency of 0-2. Their stars in Isaiah Williams and Brandon Peters never stamped down their presence in the game. Peters managed to complete 8 of his 19 attempted passes and only had seven carries. The team ranks the worst among the Big Ten in passing yards. Their total offensive yards are the sixth-worst.

Illinois goes into this game as underdogs, and with their current form, they are not expected to cause any upset. Purdue University is expected to emerge victorious, with its key players playing a significant role in the game. This makes all predictions to be in favor of Purdue.