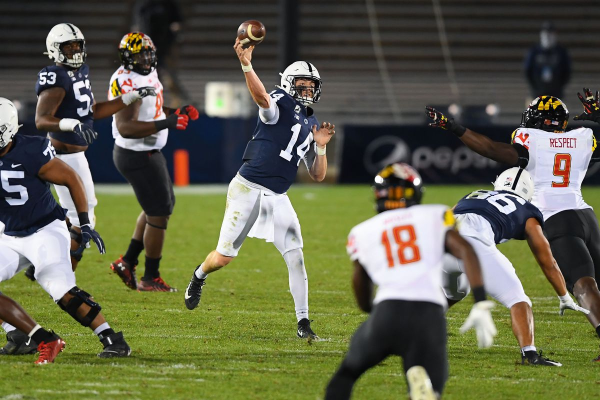 The Penn State Nittany Lions are getting set to meet the Nebraska Cornhuskers for a Big Ten head to head at the Memorial Stadium, Lincoln, Nebraska USA. Both winless teams will be playing on Saturday the 14th of November at 12:00 PM EST. Fans of both teams can follow the match as it will be broadcasted live on the FS1 TV Channel.

The Penn State Nittany Lions Ready To Roar in Nebraska

The Penn State Nittany Lions, in two out of their first three games of the season, were the favorites. However, they managed to lose all three. The Penn State Nittany Lions somehow have an overall record of 3-0. The team’s last game was against the Maryland Terrapins and ended in a 35-19 defeat, with the Maryland Terrapins leading by 14-0 at the end of the 1st quarter. In the game against the Terrapins, quarterback Sean Clifford passed for 340 yards, scoring 3 touchdowns with 2 interceptions. RB Devyn Ford managed 9 carries for 36 yards, while wide receiver Jahan Dotson secured 9 receptions for a total of 123 yards.

The Penn State offense is ranked 11th in the Big Ten Conference, averaging 26.3 points per game with 79 total points. In net passing yards per game, the team has accumulated 286.3, and in rushing yards, 129.3 yards average per game, constituting a 415.7 yards per game net total. The total passing yards accumulated by the Penn State Nittany Lions are 859 yards, and the total rushing yards is pegged at 388. The Penn State Nittany Lions have gained a total of 1,247 yards of offense against their opponents.

The Penn State Nittany Lions have allowed an average of 36.3 points per game, ranking 10th in defense in the CFB. The team has given up 256 average in passing yards and 124.0 in rushing yards per game, summing up to a 380.7 average in yards per game. Linebacker Ellis Brooks has racked up 12 solos and 1FF, while defensive end Jayson Oweh has just 9 solos to his name this season, no interceptions or sacks.

The Penn State Nittany Lions have two players uncertain for the game on Saturday, Noah Cain and Journey Brown. Their availability for the game is still doubtful.

The Nebraska Cornhuskers; Is a Rebound Possible?

The Nebraska Cornhuskers are going come into this matchup with a 0-2 overall record and will be looking for a comeback after their defeat in their most recent away game, which was against the Northwestern Wildcats, the game ended in a 21-13 victory for the Wildcats. Nebraska quarterback Adrian Martinez struggled to gain 125 yards in passing yards with 1 interception but no touchdowns. Martinez was the lead rusher in the game, rushing for 102 yards with 13 carries, but still no touchdowns. Wide receiver Marcus Fleming hurled in 5 catches for 75 yards.

On defense, the Cornhuskers allowed the Wildcats 21 points and total yards of 317 in offense. Linebacker Luke Reiner headed the defense with 10 tackles, 1.55 TFLs, 1 sack, and 1 forced fumble, while Safety Myles Farmer secured 2 interceptions in the game.

The Nebraskan defense is ranked 11th in the Big Ten defense rankings, allowing 222.5 in passing yards and 181.3 rushing yards, totaling 404.0 yards allowed this season, with 36.5 points per game allowed.

The Nittany Lions should have no problems putting this game to bed, with Sean Clifford taking the lead.