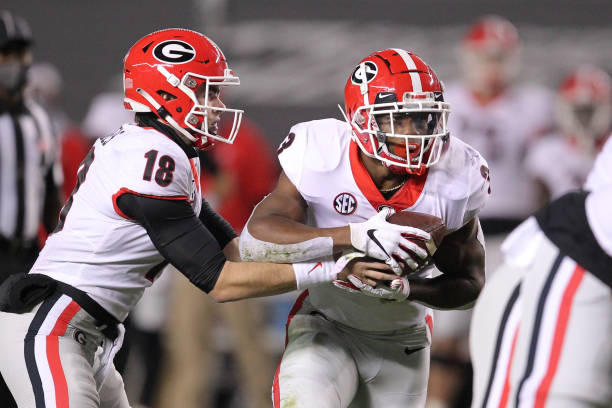 The Georgia Bulldogs (7-2) will not have to travel far from their campus in Athens, Georgia to compete in the Peach Bowl at Mercedes-Benz Stadium in Atlanta. For just the third time, they’ll face the Bearcats of Cincinnati (9-0), whom the Bulldogs beat in 1942 and 1976. Georgia is a favorite to win this one too, but they’ll have their hands full with a Cincinnati team that is unbeaten in Luke Fickell’s fifth season as Bearcats’ head coach.

Ranked fourth in the preseason, Georgia seemed poised to return to the College Football Playoff for the second time ever and the first time since 2017, when SEC foe Alabama defeated the Bulldogs in overtime to win the national championship. But, with two losses, 2020 has perhaps been a disappointing year for UGA fans. The first loss came October 17 in Tuscaloosa at the hands of Alabama, the second to Florida on November 7. The quarterback position has been a point of discussion surrounding the Georgia program all season long.

Wake Forest transfer Jamie Newman opted out before the first game. Former walk-on Stetson Bennett started in the first half of the season before Southern Cal transfer JT Daniels took over under center. Daniels tore his ACL in USC’s first game of 2019 and underwent surgery in January. Cleared mid-season, Daniels has won every game as a starter — against Mississippi State, South Carolina, and Missouri respectively.

While Georgia plays in the SEC, likely the best and most competitive of America’s “Power Five” conferences, Cincinnati can claim the title of being the nation’s top team from the other leagues, or the “Group of Five” conferences as they’re often known. The Bearcats dominated the American Athletic Conference this season. Not until the AAC championship — a 27-24 win over Tulsa on December 19 — did anyone come within one score of beating them.

Perhaps frustratingly for the Cincinnati faithful, not even an undefeated season and winning a tough conference were enough to propel the Bearcats to the College Football Playoff. This game provides a clear opportunity against an SEC opponent to prove to themselves and to the college football world that Cincinnati and other Group of Five schools can compete with anyone.

Georgia fields the nation’s 14th best defense, typical of a Kirby Smart-coached team. Smart is the former defensive coordinator of title-winning teams at Alabama under Crimson Tide head coach Nick Saban. The Bulldogs defense will need a top performance to contain a Cincinnati offense that is ranked 19th in the country.

Fortunately for Georgia, the Bulldogs are well-equipped to stop what Cincinnati does best, which is run the football. Behind dual-threat QB Desmond Ridder (17 passing touchdowns, 12 rushing touchdowns), Cincinnati has the nation’s 14th best rushing attack (225 rushing yards per game). But no defense in college football is better at stopping the run than Georgia (69.3 rushing yards allowed per game).

Georgia isn’t great against the pass (92nd nationally), but the Bearcats aren’t proficient through the air with a passing game that ranks just 49th. In sum, when the Georgia defense and Cincinnati offense are on the field, the Bulldogs have the edge.

Cincinnati has an impressive defensive unit in its own right, ranking 10th in the country (21st against the pass and 20th against the run). They would seemingly have an edge on a Georgia offense that ranks just 46th in America. However, we’re not exactly comparing apples to apples, here.

Cincinnati complemented an AAC schedule with games against Austin Peay and Army. Georgia played nine teams all from the SEC. And their overall offensive statistics do not reflect the strong, recent play from quarterback JT Daniels. In three games, Daniels has completed 66.7 percent of his passes and thrown for nine touchdowns against just one interception.

Betting Prediction for Georgia vs Cincinnati

In 2017, another AAC program beat an SEC team to win the Peach Bowl on its way to an undefeated season. That was Central Florida, who took down Auburn, to finish the year unbeaten and earn some credibility for the smaller conferences in the country.

On the surface, the season-long team statistics would suggest a similar outcome is possible if not likely in 2020. However, those numbers are a bit skewed both because Georgia played a harder schedule in 2020 than did Cincinnati and because current Bulldogs starter at quarterback, JT Daniels, was not the quarterback for the front-half of the season, including both of Georgia’s losses.