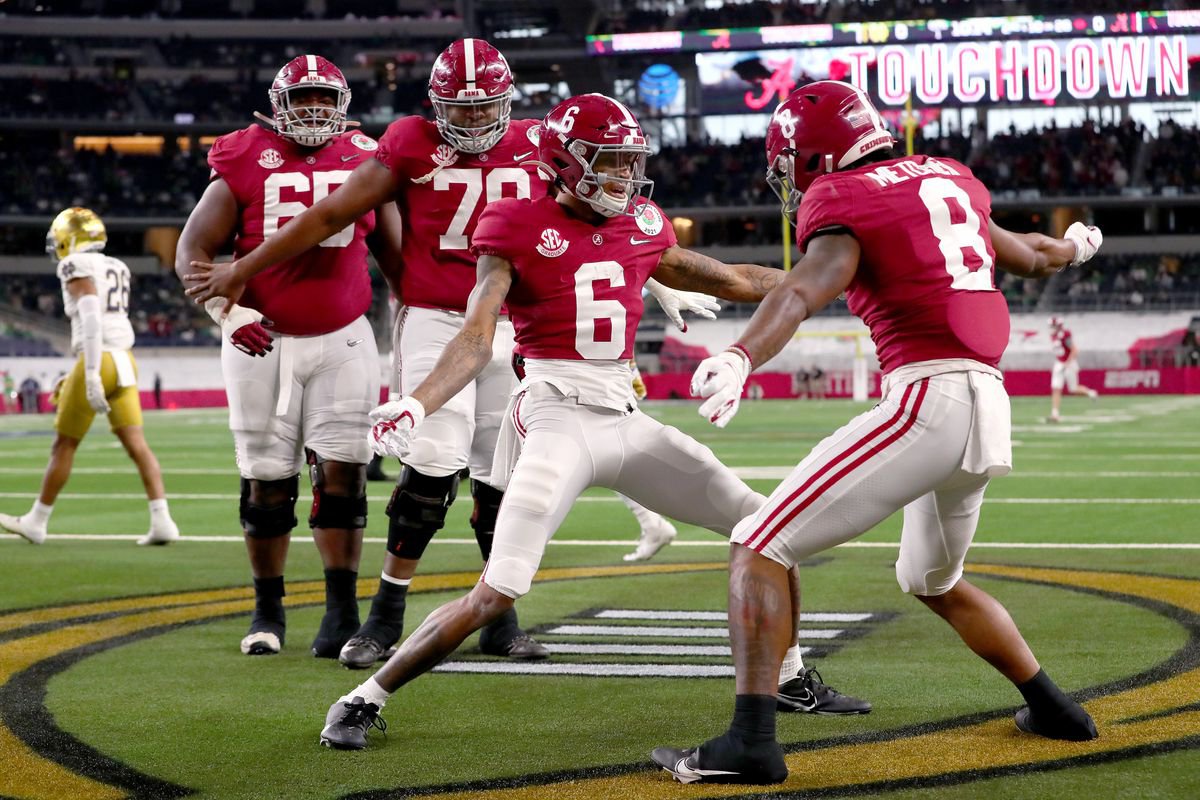 The 2020 college football season is officially in the books so it’s time to start looking ahead at what’s in store for 2021. The Alabama Crimson Tide proved to be a step above the rest, finishing the season with an undefeated 13-0 record while cruising past their College Football Playoff opponents with ease. Their National Championship run was capped off with a 52-24 win over the Ohio State Buckeyes.

Not only did Alabama dominate the standings and rankings but they also dominated the Heisman Trophy race. Wide receiver Devonta Smith became the first player at his position to win the award since 1991 but Alabama also had two other players among the Heisman finalists including quarterback Mac Jones and running back Najee Harris.

Will Alabama dominate college football once again in 2021?

Let’s take a look at the FanDuel odds to win the 2021 National Championship and Heisman Trophy.

Alabama Opens as +300 Favorite to Repeat

Most teams in college football seem to have highs and lows as their best players grow through their program for four years and then either declare for the NFL Draft or run out of eligibility. This hasn’t been the case for Alabama over the last decade as they continuously produce stud players year in and year out.

A culture has been established at Alabama that convinces players to wait until their junior or senior year before starting for the team. This results in a never-ending rotation of five star recruits who have been growing and learning as backups finally getting their chance to shine.

This looks to be true once again as despite losing star offensive players Mac Jones, Najee Harris, Devonta Smith, and Jaylen Waddle, the Crimson Tide will once again roll out a starting lineup that will be among the best in the country.

Five star quarterback recruit Bryce Young is expected to take over as the starter behind center and Jase McClellan will take over as the starting running back. Sophomore wide receivers John Metchie III and Slade Bolden will be returning for their junior year and freshman Javon Baker is expected to help fill the roles left behind by Smith and Waddle.

Don’t be shocked if Alabama manages to win the National Championship for a second straight year.

The Usual Suspects Round out the Top Five

Parity in college football seems to be a thing of the past as you could probably look at the top five teams on the odds list and not know if they were odds for the 2021 season or odds for the 2018 season. There have been seven National Championship games since the beginning of the College Football Playoff and only once has neither Alabama or Clemson been involved in it. Five of the seven have also been won by one of those two teams with Ohio State and LSU being the only other winners.

If there’s one change in the odds that may be a little bit surprising is Notre Dame, who lost in the semi-finals to Alabama, has dropped all the way down to +6000. Meanwhile Georgia has climbed up into the upper echelon with their odds set at +400. The Bulldogs can make a statement in their opening game of the season when they face the Clemson Tigers who are also listed at +400 on the odds list.

Returning Georgia quarterback JT Daniels will be in a prime spot to make a run at the 2021 Heisman Trophy.

The Oregon Ducks participated in the National Championship game in 2014, the first year of the College Football Playoff, but no Pac-12 team has cracked the semi-finals since. The conference seems to cannibalize itself as the top teams each year find a way to lose just enough games to keep them out of the conversation. The top ranked Pac-12 team at the end of 2020 was the USC Trojans who finished at just 17th in the final AP Poll of the season.

USC is set at +3000 to win the 2021 National Championship with Oregon right behind them at +4000. Not many people think either team has much of a chance as more of the same is expected on the West Coast next season. It’s a shame that a conference that used to be regarded as one of the best of the power five has turned into nothing but an afterthought.

Oklahoma quarterback Spencer Rattler had a solid season behind center as a redshirt freshman and will look to take a step forward in his sophomore season. The Sooners had a bit of a down year as two early season losses to Iowa State and Kansas State left them out of the conversation for the College Football Playoff but a bounce back season is expected in 2021.

Rattler ranked 20th in completion percentage, 10th in yards per pass attempt, and 13th in QB rating in the 2020 season which isn’t bad at all for a redshirt freshman. An expected improvement in those numbers in 2021 paired with the fact that two of the last four Heisman winners have been Oklahoma quarterbacks leads to the logical conclusion that Rattler is the deserving early front runner for the award.

DJ Uiagalelei has Big Shoes to Fill at Clemson

One of the best NFL prospects in recent years, Clemson’s Trevor Lawrence, has declared for the 2021 NFL Draft which means DJ Uiagalelei will be starting behind center for the Tigers next season. With one of the best supporting casts in football, Uiagalelei’s odds to win the Heisman are set at +900.

Uiagalelei started two games in the 2020 season when Trevor Lawrence contracted COVID-19 and he looked more than serviceable in those two games. He threw for 439 yards and two touchdowns in an overtime loss to Notre Dame and he also completed 73.2 percent of his passes in Clemson’s 34-28 win over Boston College. Uiagalelei didn’t throw an interception in his 117 pass attempts in 2020. If he can build on that success in 2021 he can do something that Trevor Lawrence wasn’t able to do: win a Heisman Trophy.

With Trevor Lawrence out of the mix at Clemson, North Carolina’s Sam Howell has a chance to grab the title of best quarterback in the ACC. The sophomore quarterback was fourth in the nation in passing yards in 2020 as well as sixth in both yards per pass attempt and touchdown passes while leading UNC to an 8-4 record. The Tarheels were also ranked 18th in the final AP Poll of the season.

Despite UNC being largely regarded as a basketball school, Howell played a huge role in putting the Tar heels on the map as a legitimate football program as he led them to two straight winning seasons including a victory in the 2019 Military Bowl. If Clemson takes a step back in 2021, don’t be surprised if UNC is right there to snag the ACC crown from their heads.

Many people think Howell has all the makings of a professional quarterback and some early 2022 NFL mock drafts have the UNC quarterback going first overall. A solid 2021 campaign, which may include a Heisman Trophy, would go a long way in helping his draft stock this time next year.