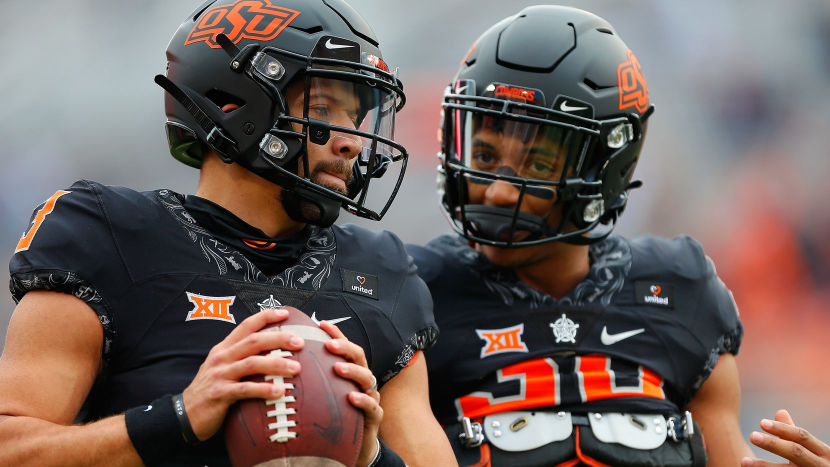 The #14 Oklahoma State Cowboys collide with the Kansas State Wildcats this Saturday afternoon in a Big 12 showdown. Both teams are standing at 2nd and 3rd place in the division standings, but now they are looking to bounce back from their losses last week.

Oklahoma State suffered their first loss this season with a 41-34 upset in overtime against the Texas Longhorns. The Cowboys led most of the game before their opponents started fighting back in the 4th quarter. QB Spencer Sanders, who returned from injury two weeks ago, finished with 27 completions for 400 yards, scored four touchdowns, and made an interception. However, the offense also dished out four turnovers that gave Texas the upper hand.

Meanwhile, Kansas State didn’t do much better as they were dominated by the West Virginia Mountaineers 37-10. They only made a touchdown and a field goal during the first half then went scoreless in the second. This loss broke their 4-game winning streak and knocked them out of the top spot in the Big 12 standings. Quarterback Will Howard only made 19 completions for 184 yards and added three interceptions. A notable interception of the game came in the 3rd quarter when Mountaineers LB Dylan Tonkery caught a deflected pass and turned it into a pick-six.

The Cowboys’ offense has been a contributing factor to the team’s success so far. Sanders has a 70 percent completion rate and leads the team in passing yards with 658. RB Chuba Hubbard leads the rushers with 550 yards, and WR Tylan Wallace leads the receivers with 588 yards. Defensively, S Tre Sterling records the most tackles with 37 total. LB Amen Ogbongbemiga follows along with 35 tackles, then it’s Malcolm Rodriguez with 33 tackles.

Howard has a 55.9 percent completion rate this season and 741 passing yards. RB Deuce Vaughn leads the rest of the offense with 331 rushing yards and 361 receiving yards. LB Justin Hughes leads the defense in tackles with 36. DB Jahron McPherson follows with 35 tackles but leads with two interceptions. LB Elijah Sullivan stands behind him with 32 tackles.

Both teams are neck-and-neck against each other and Iowa State in the division standings, and the fact that both lost last week has people asking what went wrong. In the end, it came down to a team that played hard but made notable mistakes and a team that didn’t play hard enough. For this game, it will probably come down to whose offense is better.

The Cowboys can win if they can play the way they did against Texas as long as Sanders and the offense play with the same efficiency as they did so far this season. Sanders, however, is still taking things step-by-step, and last week’s loss and mistakes have coaches wondering if he was ready to play again. Now it’s too soon to decide on putting back Shane Illingworth, who stepped in during Sanders’ injury period. Illingworth’s numbers have shown he’s more than capable as a quarterback, but Sanders has shown that he hasn’t lost a step despite the loss.

Kansas State didn’t show their prowess from the last four games. People could be wondering what happened to the team that dominated and almost escaped losses from Texas Tech and TCU a couple of weeks ago. Or what happened to the team who defeated the formerly third-ranked Oklahoma Sooners in week 2? All questions aside, they have to bring the same fighting spirit they had during their winning streak. Howard and Vaughn will have a difficult time getting on the same level as Sanders and Hubbard. They already had it challenging last week when they were held down by the Big 12’s top defense throughout the game, but that doesn’t mean they will have it any different against both Cowboys offense and defense.

I believe this will be a tight game, especially since trying to stay within the top three standings is the proper motivation both teams need. However, the stats, bets, and I say that Oklahoma State will win this game and cover the spread.