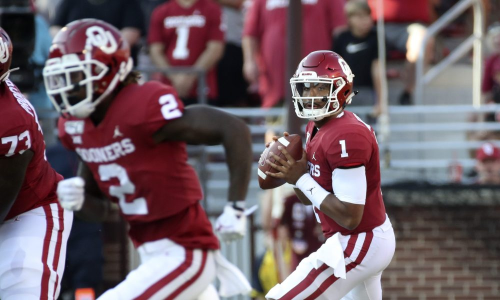 Oklahoma enters the game coming off an impressive 33-14 win over TCU last week. Oklahoma jumped out to a quick 17-0 lead and was up 30-7 in the 4th quarter as this game wasn’t as close as the score shows. QB Spencer Rattler continued his dominant season going 13-22 for 332 and 2 touchdowns. Overall the Sooners accumulated 498 total yards, 140 more yards than TCU, and were surprisingly stout defensively holding the Horned Frogs to just 75 yards rushing. RB TJ Pledger went for 122 yards on 22 carries, adding a touchdown, and WR Marvin Mims caught four passes for 132 yards and two scores. During their two-game win streak, the Sooners have averaged 43 points per game and will look to continue their offensive success this weekend.

Last week Texas Tech secured a surprising win over West Virginia 34-27 thanks to a Zech McPhearson 56 yard scoop and score with 8:44 remaining in a tie game. Texas Tech entered the game as a 3 point underdog but was able to pull the upset and get their first conference win. QB Henry Colombi, in his first start, went 22-28 for 169 yards and a touchdown, while RB ShaRoderick Thompson added 68 yards and a touchdown on the ground. It was a weird game, as the Red Raiders were outgained by WVU 438-348, and they gave up 347 yards through the air to a mediocre Mountaineer pass offense. Texas Tech will aim to ride the momentum of a big win and pull another upset this week against the Sooners.

To pull the upset, Texas Tech will need to sure up a defense that has leaks all over. Currently, the Red Raiders are giving up 37 PPG (83rd in FBS), are 97th in Pass Defense, and 89th in Total Defense. They have given up at least 400 yards in every game so far this season as teams are averaging 6.2 yards per play. As bad as their pass defense is, their rush defense isn’t much better. In their last four games, they have given up 179 rush yards per game, including two games where they allowed more than 200 yards on the ground. Teams average close to 80 plays a game vs Tech (78.6), and it’s easy to see why they struggle to stop anyone.

Oklahoma QB Spencer Rattler will look to take advantage of this dismal pass defense. On the year, Rattler ranks 7th in passing yards, 6th in touchdowns, and 13th in pass yards per game. WR Marvin Mims is 6th in FBS in receiving TDs as almost 33% of his catches end up in the endzone. Oklahoma currently ranks 12th in yards per game, 7th in pass yards, and 14th in points per game with 39.8. The Sooners run over 75 plays per game, as they rely on Rattler to make smart decisions and dice up opposing defenses. In their two-game winning streak, Oklahoma has averaged 43 points per game, 187 rushing yards, and 483 passing yards per game. All signs point to Lincoln Reilly’s side starting to click offensively, and that should scare opposing Big 12 defenses.

DraftKings currently lists Oklahoma (-14.5) as the favorite with the total at 68. Some things to keep in mind as we approach the betting aspect of this game. It’s an 8 pm primetime kickoff on Fox at Texas Tech on Halloween, and it should be a point-a-palooza.

Oklahoma is rolling offensively, and there is nothing that would point to Texas Tech being able to stop them. For that reason, I’m taking the over 68, the over on Oklahoma’s Team Total 41.5, and OK 1H (-7.5).

The spread for the game concerns me. If you can tease it down to 14 or just wait until kickoff to see if the line drops, I would recommend doing that. This game will be a shootout for sure, but I’m concerned Texas Tech will hang on primetime. If you end up teasing the spread to 14 or below, put the over 68 in a parlay to boost the odds back up so you don’t have to lay too much juice.