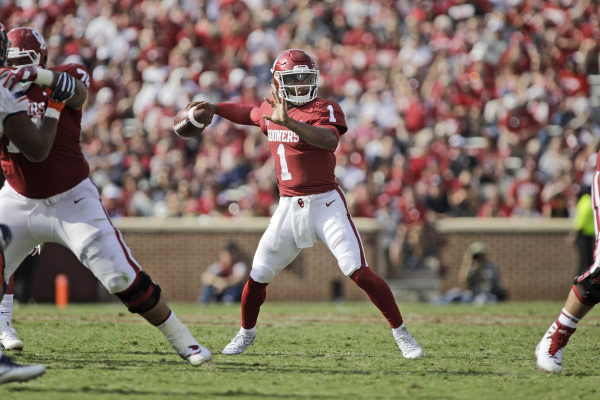 The Oklahoma Sooners and Texas Longhorns are set to meet for the 113th time in the Red River Showdown on Saturday. Texas holds the all time series lead, with a 61-46-5 record against the Sooners. Oklahoma has won the previous two matchups over Texas, including a 29-24 victory last season.

Oklahoma comes into this game as the 7th ranked team in the nation, and hold a perfect 5-0 record. The Sooners have yet to face a top-25 opponent this season, and are beating teams by an average of 25 points per game. The Longhorns have jumped up to the 19th ranked team in the nation after falling out of the polls. Texas was stunned in the season opener against Maryland, but has responded by winning their last four games. Oklahoma is a seven point favorite in this matchup.

The Oklahoma Sooners were supposed to take a step back this season after losing Heisman Trophy winning quarterback Baker Mayfield to the NFL. Instead, Kyler Murray has taken over and has the Sooners looking like a playoff team again this season. Murray has completed over 70 percent of his passes this season, and has thrown for 17 touchdowns with just two interceptions. The dual threat quarterback has also ran for four touchdowns this season. The Oklahoma offense should be on full display in this game.

Despite having an undefeated record, the Sooners defense has given up a ton of yards this season. Oklahoma has allowed opponents to average 405 yards per game this season, and it nearly cost them against Army. In that contest, the Sooners allowed Army to have the ball for nearly 45 minutes and their defense was tired and worn down. The offense has the tendency to score quickly for Oklahoma, causing the Sooners defense to spend a ton of time on the field. Oklahoma will need to find a balance in this game so their defense to get stops against a talented Texas offense.

The Texas Longhorns come in to this game riding a four game winning streak, and their defense is a big reason why. Texas has a top-25 defense this season, and they have been great against the run, dating back to last season. They have not allowed a team to rush for over 200 yards in 17 straight games. In their three biggest wins of the season against TCU, USC, and Kansas State, the Longhorns have given up just a combined 17 second half points. The Sooners defense will be tested in a big way in this game.

Sophomore quarterback Sam Ehlinger looks to be a future star for the Longhorns, and is having a solid 2018 season. He has thrown for 1,185 yards this season and nine touchdowns, while throwing just two interceptions. Keontay Ingram has been the best running back for the Longhorns this season, averaging over 6 yards per carry. Texas has had seven different players record a rushing touchdown this season. The Longhorns will need to sustain drives in this game to give their defense a break.

Look for this to be a high scoring game, with both teams capitalizing on big plays. In the end, Oklahoma simply has too much talent and will win by double digits. Bet the Oklahoma Sooners -7.0 over Texas in this game.