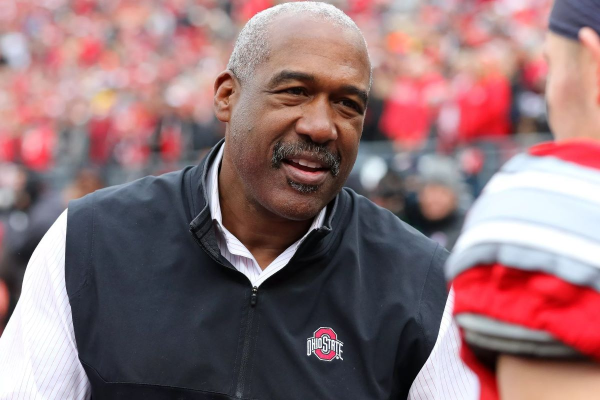 With 102,780 seats in its football stadium, Ohio State owns the fourth-largest on-campus facility in the country. The Buckeyes are aiming to leverage that capacity to host between 20,000 and 50,000 fans at football games this fall.

With the football season looming, universities and athletic directors around the nation are endeavoring to find a solution to playing games with fans in attendance amid the coronavirus pandemic.

That prospect is especially important for the majority of Power 5 schools, where football pays for a significant portion of entire athletic programs.

Ohio State and athletic director Gene Smith appear to be closing in on that goal.

“We’re fortunate, with 100,000 seats in the stadium,” Smith said. “So could we implement the current CDC guidelines, state guidelines around physical distancing, mask requirements and all those types of things in an outdoor environment and have obviously significantly less fans than we are used to? I think it’s possible.”

According to the Ohio State athletic department, which has run several social distancing models, Ohio Stadium could hold up to 50,000 fans during football games, “if guidelines are relaxed.”

Initially, games would be expected to be played in front of 20,000 to 22,000 fans under current social distancing guidelines.

“I just feel like we have the talent and skill and space capacity to provide an opportunity for a certain number of fans to have access to our particular stadium,” Smith said. “Of course, that wouldn’t be true across the country because of capacity. But I think we can get there.”

Much of the potential for the inclusion of fans at college football games will depend on the ever-changing measures put in place by local communities, state governments, and the Center for Disease Control and Prevention (CDC) as the world grapples with the coronavirus pandemic.

Should a feared “second wave” of the virus be avoided, Ohio State’s ability to allow a limited number of fans into games would add the burden of deciding who gets in and who would be left out.

The Buckeyes already use a point system to determine part of their ticketing procedure for football games. Smith said the athletic department would lean on that point system, but would also consider other groups, such as students, faculty, parents, donors, and media.

“We have to look at those and come up with some strategies within those groups,” Smith said. “Our point system has held the test of time, so that would probably be one. Then, of course, the parents and the guests of our student-athletes and coaches would be a high priority. We’d come up with a strategy, but we haven’t nailed that down.”

When it comes to the College Football Playoff, Ohio State is always among the list of contenders. While the sport itself may look severely different amid the coronavirus pandemic, the Buckeyes’ role as championship contender will not.

With odds of +400 to win the College Football Playoff, Ohio State is the second favorite in the nation. The Buckeyes trail only Clemson, which owns odds of +175.

When it comes to the Heisman Trophy, the Buckeyes and Tigers lead the list of favorites once again. Ohio State’s Justin Fields is the frontrunner with odds of +250, but he’s followed closely by Trevor Lawrence’s +350 odds.

D’Eriq King and Spencer Rattler share the next-highest odds of +1400.