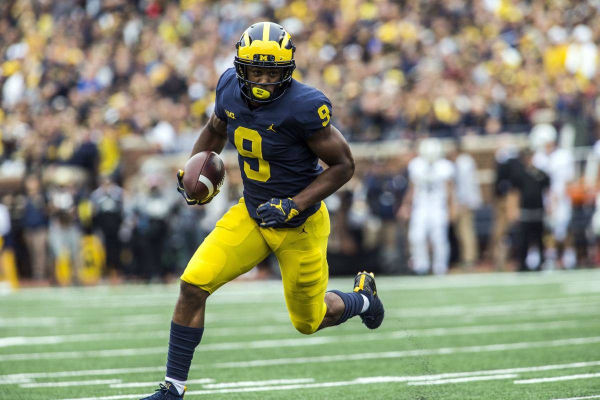 The magnitude of this game is hard to describe. The winner not only gets Northwestern for the Big Ten championship game, but they will also keep their national championship hopes alive. For the loser, both of those dreams probably go away. It will definitely be an exciting one as Jim Harbaugh and the number 4 Michigan Wolverines (10-1, 8-0 in the conference) will travel to Ohio Stadium to take on Urban Meyer and the number 10 Ohio State Buckeyes (10-1, 7-1 in conference). The most exciting thing to watch in this game will probably be the passing game. For Ohio State, their offense rolls behind the arm of sophomore quarterback Dwayne Haskins, while Michigan boasts the top-ranked passing defense in the nation. On Saturday, something will have to give as the two meet up for a 12:00 pm ET kickoff.

The point spread comes in with the Michigan Wolverines being 4.5-point favorites on the road. The over/under on total points scored is set at 54 points.

Michigan Hoping Defense Is Up To The Task

Michigan has been on a roll for most of the season this year. After a 24-17 loss to number 3 Notre Dame in week 1, the Wolverines have won 10 in a row including a 31-20 win over Indiana last week.
The biggest thing that Jim Harbaugh has going for him is an unreal defense. They rank number one in the country and are only allowing 234.8 yards per game to opposing offenses. Their defensive leaders are Devin Bush (60 tackles), Josh Uche (7 sacks) and Josh Metellus and Brandon Watson (3 interceptions apiece).

On the offensive side, Shea Patterson has led the way for the Wolverines under center. He has 2,177 yards passing with 18 touchdowns versus only 4 interceptions. He has also added 255 yards and 2 touchdowns rushing. His leading receivers are Donovan Peoples-Jones (447 yards, 7 touchdowns), Zach Gentry (475 yards, 2 touchdowns) and Nico Collins (461 yards, 4 touchdowns). Probably the best weapon for the Wolverines on offense, though, is Karan Higdon. The running back has 1,106 yards with 10 touchdowns on the season. Against an average at best Ohio State defense, Higdon may have a big game.

Haskins To Have To Pick Apart Vaunted Defense

It is pretty tough to score on the Wolverines, but Dwayne Haskins will present a huge challenge for them. On the season, Haskins has thrown for 3,685 yards, 36 touchdowns, and 7 interceptions. His leading receivers are Parris Campbell (711 yards, 9 touchdowns) and K.J. Hill (772 yards, 5 touchdowns). On the ground, they also have some talent between J.K. Dobbins (915 yards rushing, 8 touchdowns) and Mike Weber (711 yards, 4 touchdowns).

On the defensive side, they have struggled a bit more this season. They currently rank 78th against the pass and 63rd against the run, leaving them susceptible despite the fact that Michigan doesn’t have an elite offense. The defensive leaders this season have been Malik Harrison (57 tackles), Dre’Mont Jones (7.5 sacks) and both Kendall Sheffield and Shaun Wade with 2 interceptions apiece.

One of the biggest issues this season has been inconsistency. While they have only lost one game, a 49-20 shocker against Purdue, they have shown struggles throughout. For instance, last week against a Maryland team that they were expected to steamroll, they were luckily able to pull out a 52-51 overtime victory, mostly due to a missed two-point conversion try. While they are definitely scoring points (they have scored 36 or more in 8 games), they are struggling to keep points off of the board.

Full disclosure, I have gone back and forth on this one a bit, particularly since the line has moved to 4.5 points. Still, with what I have seen this year, I just trust Michigan a little more than I do Ohio State at this point. Dwayne Haskins has been fantastic for the Buckeyes, but he also hasn’t seen a defense like Michigan’s. More importantly, I am not sold that Ohio State will consistently be able to stop Michigan’s offense. If Dwayne Haskins has a big day, it could easily go the way of the Buckeyes, but for my money, I will take the safer bet in the Wolverines.