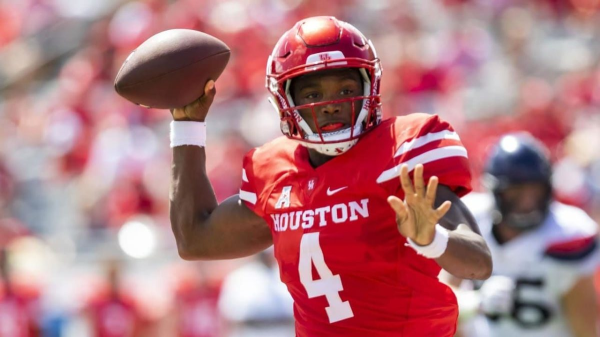 Friday night kicks off the Week 3 college football slate with a matchup of Cougars, as the No. 20 Washington State Cougars (2-0) will travel to NRG Stadium to take on the Houston Cougars (1-1). These are two dynamic offenses and points should be plentiful in this matchup. Kickoff for this one is scheduled for 9:15 pm ET.
Washington State is coming off back-to-back wins where it exceeded 50 points. In their opening matchup, the Cougars beat New Mexico State 58-7, then followed that with a 59-17 win over Northern Colorado. While it is evident that they can score points, the Cougars’ defense will be tested against a high-scoring Houston team.

Houston has shown that it is a talented team by making it a game with No. 5 Oklahoma in the opening week. Despite losing 49-31, the Houston Cougars showed that they were capable of playing with the big boys. In Week 2, they got some reprieve as they faced Prairie View A&M, easily winning 37-17.

The point spread for this one currently sits with Washington State being a 9.5-point favorite despite playing on the road. The over/under on total points scored is set at 73.5.

With two of their first three games being against top-25 teams, the Houston Cougars certainly know that they had a challenge early in the season. Still, despite losing to Oklahoma in their opening matchup, they have an opportunity to help propel their season if they can get the upset win over Washington State.

Leading the way for Houston will be quarterback D’Eriq King. On the season, King is 29 for 53 for 306 yards, three touchdowns and an interception. He has also added 21 rushes for 102 yards and three additional touchdowns. He will be the key to Houston having a chance.

On the ground, Kyle Porter is also a legitimate option for Houston. He has rushed 33 times this season for 160 yards and a touchdown. Through the air, the leader has been Marquez Stevenson in terms of receptions. He has 10 catches for 105 yards and a touchdown. Houston will hope to rely on a dynamic offense to carry it to a victory.

While Houston’s offense has been strong, Washington State’s has been exceptional early on. Granted, the opposition hasn’t been the strongest, but the results are hard to deny. Leading the way has been quarterback Anthony Gordon, who is 60 for 74 for 884 yards, nine touchdowns and just one interception.

Even more impressive than Gordon’s stats has been the play of the receivers. There are five receivers with more than 100 yards thus far, and each of those five has scored at least one touchdown. The leader in terms of touchdowns has been Easop Winston Jr., who has scored three touchdowns already on 11 receptions and 164 yards. The leading receiver thus far has been Brandon Arconado with 14 receptions for 193 yards with a touchdown. Regardless, there are weapons everywhere.

On the ground, it is Max Borghi leading the way. He has 17 rushing attempts for 162 yards and three touchdowns. With a lethal passing game, holes may open up for Borghi in this one.

Taking Houston And The Points

I will bet my house that the Cougars win this one. Joking aside, I think this could be an interesting and very high-scoring game. These are two exceptional offenses with defenses that still have something to prove. I do think Washington State comes out with the win in this one, but 9.5 points is hard to ignore for a team that can put up points in a hurry.

I wouldn’t blame you if you took Washington State, but for my money, I will take my chances with the Houston offense covering the 9.5 points. Take Houston at +9.5.