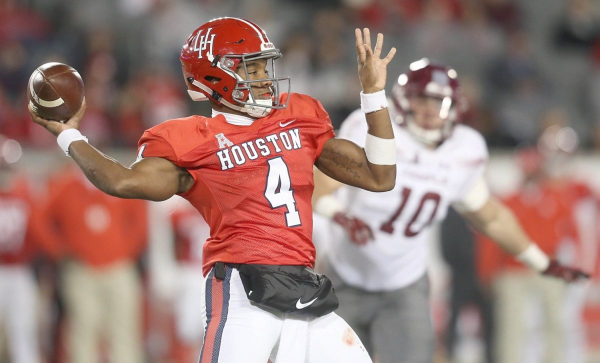 Week one of the college football season has been filled with interesting matchups, and Sunday night’s matchup between the Houston Cougars and the Oklahoma Sooners at Gaylord Family Oklahoma Memorial Stadium is no exception. These are two high-powered offenses that hope to put up a lot of points. In fact, the over/under for points scored in this one is set at 80. Kickoff for this matchup is scheduled for 7:30 pm ET.

Houston would love to erase the last handful of games from last year from its memory. After starting 7-1 last season, the Cougars lost four of their last five, including a 70-14 loss to Army.

With Major Applewhite out and Dana Holgorsen in, the Cougars will look to once again feature an offensive explosion, especially with D’Eriq King back under center. While they should score points, the question will continue to be if they can stop their opponents from doing the same.

For two years in a row, Oklahoma has featured a Heisman Trophy winner. First, it was Baker Mayfield, and last year, it was Kyler Murray.

This year, Jalen Hurts, the former standout at Alabama, is hoping to make it three in a row. After Tua Tagovailoa got the starting nod with the Crimson Tide, Hurts decided to transfer, and it was to Oklahoma’s benefit.

The point spread for this one currently sits with No. 4 Oklahoma being a 23-point favorite at home.

In 2018, these were two of the best offenses in all of college football. In fact, the Oklahoma Sooners sat atop of the rankings in terms of points per game, averaging 48.4 points (51.4 at home). Houston came in seventh overall, averaging 41.8 points per game (37.3 on the road).

With those numbers in place and two stellar quarterbacks at the helm, it is no surprise that these teams are once again expected to be offensive juggernauts.

While these teams were stellar on the offensive side last season, the defensive side was a different story. Oklahoma ranked 95th in the nation in points allowed at 33.3 (27.1 at home). Houston ranked 121st, allowing 39.1 points per game (44.7 on the road).

After a disappointing end to last season, Houston is hoping to put together a full season this year. One thing that will help is a healthy D’Eriq King. Last season, in just 11 games, King went 219 for 345 for 2,982 yards, 36 touchdowns, and just six interceptions. He also rushed 111 times for 674 yards and an additional 14 touchdowns.

As a one-man wrecking crew, King will hope to stay healthy for an entire season and could really put on a show within Houston’s offense.

Baker Mayfield to Kyler Murray to Jalen Hurts. That is a three-year transition of quarterbacks that most programs can only dream about. While the two former quarterbacks are getting ready for their pro seasons, Hurts enters this college season not only talented but motivated as well.

Hurts spent his first three collegiate years at Alabama, where he was solid if not spectacular. That still didn’t prevent him from losing his job over the last couple of seasons, and it was enough to make him want to transfer to enjoy his senior season.

His best season was in 2016 when he threw for 2,780 yards and 23 touchdowns. He also rushed that season for 954 yards and an additional 13 touchdowns. Oklahoma will hope he can regain some of that explosiveness this season.

Regardless, Oklahoma should be an offense that can beat you both on the ground and through the air, making it a nightmare for opposing defenses.

Take The Points In A Shootout

I anticipate that a lot of points are going to be scored on Sunday night. With two of the most prolific offenses in the nation and two of the weakest defenses, these teams shouldn’t have too much trouble putting points up.

With that in mind, I like King’s chances of keeping the Cougars in this game. I don’t think they can beat Oklahoma, especially on the road, but the 23 points seem awfully enticing to bet. For my money, I will take Houston and the 23 points.