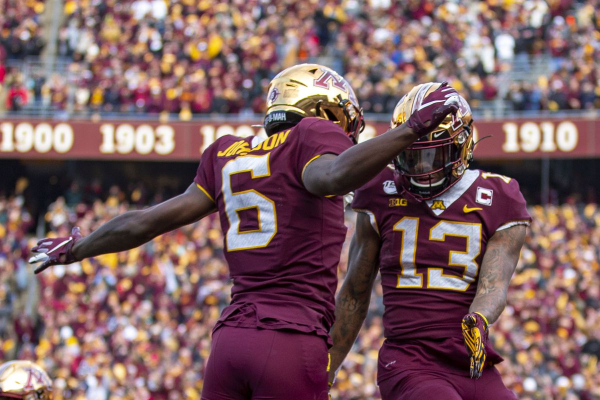 This Friday in College Park, MD both the Minnesota Golden Gophers (0-1, 0-1) and Maryland Terrapins (0-1, 0-1) will be looking for bounce back performances.

Minnesota entered their matchup last week ranked as the #19 team in the country, but were absolutely dismantled 49-24 by the Michigan Wolverines. Michigan destroyed the Gophers on the ground, accumulating 253 rushing yards, along with 5 rushing touchdowns, and averaged over 8 yards per carry.

Minnesota QB Tanner Morgan (18-31, 58%, 197 yards, 1 TD, 1 INT) struggled vs the Michigan defense, as the only true bright spot was RB Mohamed Ibrahim. Ibrahim stepped into the role vacated by Rodney Smith, who rushed for over 1000 yards last season as a senior. Ibrahim ran for 140 yards on 26 carries, good for a 5.4 yard average, adding 2 scores. The 140 rushing yards per game average is good enough to post Ibrahim at 2nd in the country. Star WR Rashod Bateman had 9 catches for 101 yards and was held off the score sheet.

Maryland didn’t fare much better in Chicago vs Northwestern. The good news for Maryland was they scored on their opening drive and led 3-0. The bad news was they were outscored 43-0 over the rest of the game and were absolutely boat raced by the Wildcats. QB Taulia Tagovailoa (14-25, 56%, 94 yards, 3 INTS) was dreadful in his first career start, and the Terps only mustered 207 total yards against a Northwestern defense that gave up 335 a game last year. Northwestern ran for 325 yards, and added 212 passing yards as they outgained Maryland 537 to 207. The Wildcats averaged over 6 yards per carry, scored four times on the ground, and easily covered the 11 point spread.

In 2019, Minnesota was a top 10 defense in terms of total yards, as they only surrendered 306 a game. Michigan easily eclipsed that mark, and that should be concerning for PJ Fleck. One of the curveballs with the Big 10 season is that by playing conference games from the start, teams don’t get their usual cupcakes to start the season. Instead of getting 2-3 games to find their groove, they are forced to figure it out immediately, and that was on display this past week vs. Michigan.

Fleck has gone from 5 to 7 to 11 wins in his three years at Minnesota. This is a potentially huge year for the Gophers as they have three certified stars on the offensive side of the ball. QB Tanner Morgan threw 30 touchdowns in 2019, which was good enough for 14th in the country. Rashod Bateman, 14th in receiving yards in 2019, had a solid opening game, but should command more targets. RB Mohamed Ibrahim will continue to dominate on the ground, and benefit from teams concerned about a Bateman/Morgan connection. Minnesota will look to find some traction on offense against a Maryland side that struggles to stop anyone.

Mike Locksley’s Maryland side has a lot to figure out. They are a relatively young team, with a bunch of transfers as well. Over 50 players wore a Maryland jersey for the first time on Saturday, and this is another team that was really hurt by the lack of lead up games. Maryland will struggle all year, and it’s hard to find a game where they will be favored to win.

Maryland ranked 109th in total defense last year, allowing 450 yards per game. They gave up an average of 177 yards on the ground and were ranked 116th in pass defense (271 a game). The Terps allowed 34.7 points per game in 2019 (ranked 115th in FBS) and teams moved the ball with ease. One of those teams was Minnesota, who in their matchup vs Maryland last year smoked them by 42. In that game, Minnesota ran for 321 yards and 4 touchdowns, a line that looks pretty similar to the one Northwestern put up just a week ago.

Fanduel is currently listing Minnesota (-19.5) as the favorite, with the total at 60.5. Vegas sees this as a 40-20 Minnesota win, which to me is tough to envision. I’m not sure how Maryland gets to 20 with their issues at the QB position and lack of offensive talent.

I’m taking Minnesota to cover the first half (-10.5), game (-19.5), the over 89.5 rushing yards for Mohamed Ibrahim, and the over 103.5 receiving yards for Rashod Bateman. PJ Fleck will want to show the country that Minnesota is not who we saw last week. Look for the Golden Gophers to put up at least 50 points on Maryland for the second straight year.

After extending their hot and San Diego’s cold streak, the Seattle Mariners will be looking to leave Petco Park with a two-game sweep as they take on the Padres this afternoon. Yesterday, the Mariners pounded out a dozen hits and plated eight runs, and Chris Flexen pitched 6.2 shutout innings to collect his third straight END_OF_DOCUMENT_TOKEN_TO_BE_REPLACED