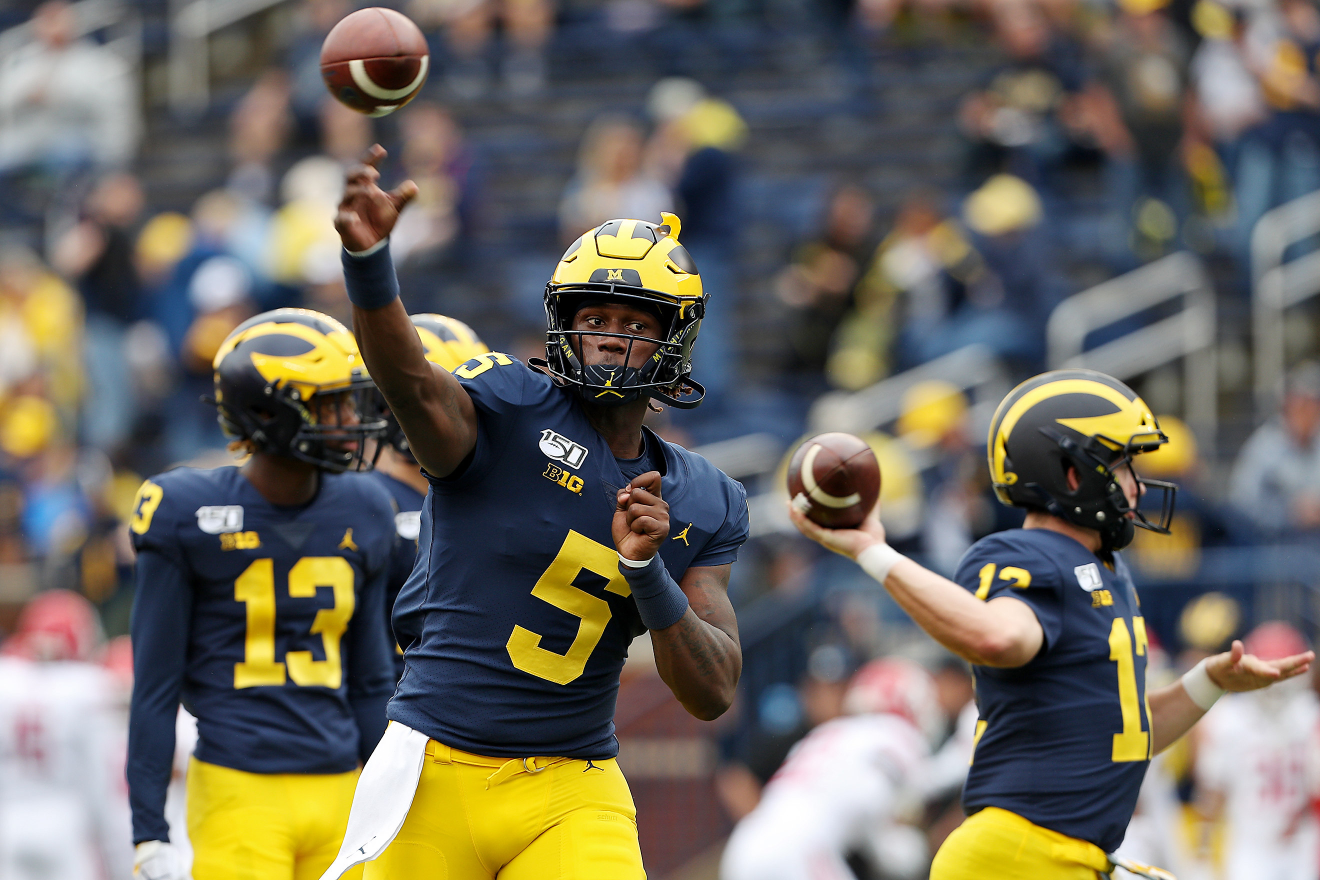 Big Ten football is back! In the second weekend of the conference opening its doors for play, the historic Michigan vs Michigan State matchup is set for Saturday, October 31, at 11 am CST with the Wolverines pegged as enormous 24.5-point favorites at DraftKings Sportsbook. After 82 games played since 1898, the Michigan Wolverines hold a slight advantage in the matchup with an all-time record of 41-36-5.

With only game under their respective belts this season, neither team has shown their true identity. However, in their first games, the two teams looked to be headed in two different directions as Michigan looked dominant, while Michigan State looked like they need to improve on a few key aspects of the game.

The University of Michigan is looking to start the season 2-0 after a dominant win against the then ranked No. 21 Minnesota Golden Gophers. The Wolverines looked as though they hadn’t missed too many beats since last season, tallying 49 points in their season debut. Quarterback Joe Milton threw for 225 and a TD while also accumulating 52 yards on the ground, finding the end zone with his legs twice.

Michigan State, on the other hand, is looking to bounce back after having a tough first outing, losing to Rutgers in their season opener 38-27. The Spartans had a tough first go as they were not able to establish a solid run or pass game, with only 50 yards on the ground on 39 attempts. Quarterback Rocky Lombardi managed to throw for 319 yards and three TDs, but those great numbers were also accompanied by two picks.

The latest lines on DraftKings have Michigan as the 24.5-point favorites (-4000 on the moneyline) while the OVER/UNDER is set at 51.5.

Why Michigan Can Cover

Their defense. Last week, Michigan was able to stop 2019’s 22nd ranked offense, allowing one TD through the air and two on the ground. The defense has one interception, four pass deflections, one fumble recovery for a touchdown, and five sacks. The Wolverines had the 22nd best run defense in college football last year, allowing an average of 122.7 yards per game. These numbers will make it hard for any offense to establish a run game.

Their run game. The Wolverines run game was lights out in their last outing, racking up 253 yards on 31 attempts accounting for five Michigan touchdowns. Running backs Zach Charbonnet and Hassan Haskins carried a bulk of the load, combining for 152 yards and three TDs.

Why Michigan State Can Cover

If they limit the turnovers the defense can and will be more rested. If it weren’t for the seven turnovers that MSU produced, the team’s defense could’ve looked a lot better. Even with turning the ball over, the defense only allowed 276 yards of total offense.

Their receivers. Jayden Reed (11 catches, 128 yards, 2 touchdowns) and Jalen Nailor (6 catches, 84 yards, 1 touchdown) have emerged as the two early favorites for targets. If these two are on the same page with their QB, they can do a lot of damage to the Wolverines secondary.

Overconfidence. If The Wolverines come out of the gate thinking they are going to win this game and not play as they should, MSU could capitalize. When Michigan is a higher rank than their opponents, they are 6-6 under Jim Harbaugh, notably losing to the unranked Spartans in 2017.

Michigan will be coming out with something to prove to the college football world on Saturday. The team wants to show the world that they are to be in the conversation with Ohio State and Wisconsin as the best team in the Big Ten. This is a huge game for the Spartans. Their season lies completely in the balance of this game.