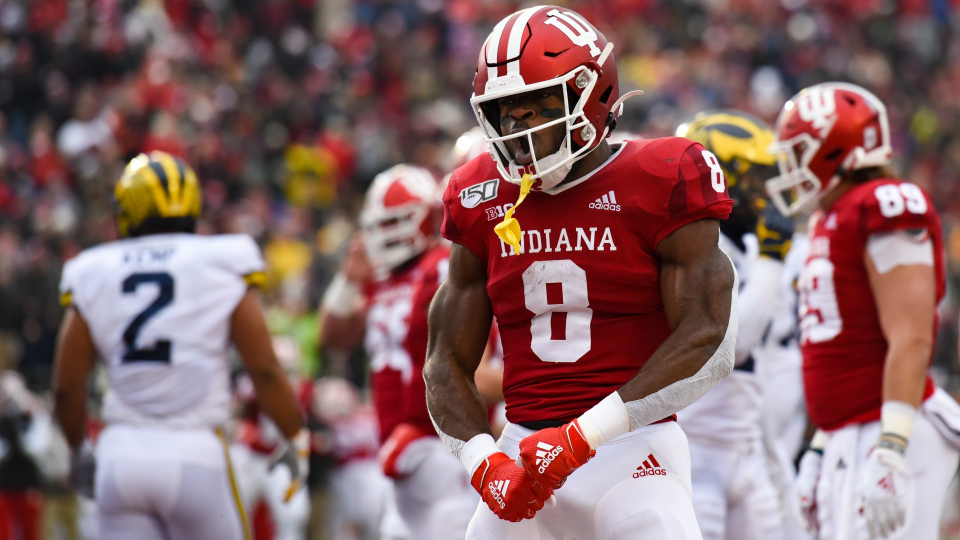 This Saturday, Michigan (1-1) will look to bounce back into the win column against Indiana (2-0) in a Big Ten conference game at Memorial Stadium in Bloomington, Indiana kicking off at noon.

The Hoosiers enter the game ranked 13th in the AP Poll. This is the first time Indiana has started its Big Ten schedule 2-0 since 1991 after shocking Penn State with a 36-35 overtime win and taking care of business against Rutgers 37-21. Indiana stormed ahead in the first half against the Nittany Lions before letting them claw back in the fourth quarter. After giving up a touchdown at the start of overtime, quarterback Michael Penix Jr. connected with Whop Philyor for a score, then dove across the goal line on the conversion to win it.

Sitting at 23rd in the polls after a 27-24 loss to underdog and rival Michigan State, this Michigan team is still looking for its identity. The season started with a promising 49-24 win over Minnesota before falling flat the following week. Quarterback Joe Milton was solid in the opener, connecting on 15-22 passes for 225 yards, a score, and no picks. He added 52 yards on the ground as part of a strong team performance running the ball. That performance didn’t carry over against the Spartans. After compiling 253 yards and 5 touchdowns on the ground against the Gophers, the Wolverines only mustered 126 and no rushing TDs against Michigan State.

Michigan is one of the most penalized teams in all of college football, averaging 8.5 per game. The flags have cost them 135 yards. They are allowing 260 passing yards per game, which is ninth in the conference and is 44th in CFB in yards allowed with 387.5. On offense, they’re 21st in the country in total yards per game (466.5) but 40th in touchdowns with 9.

Indiana was third in the conference in total offense last season but will need to open it up more to maintain that level as the season goes on. Currently, the Hoosiers rank 105th in the nation in total ypg with 291.5. The team is only running 61.5 plays per game which is on the low end, and Penix Jr. is only averaging 6.6 yards per attempt.

Success for Michigan looks simple through two games. Run the ball and win. Don’t run the ball and lose. Even though the team struggled last week, Hassan Haskins is leading the country with an average of 9.9 yards per carry (though on only 14 attempts). Haskins and Zach Charbonnet split rushing duties pretty evenly last season. Charbonnet has shown big-play ability, ripping off a 70-yard score against Minnesota, but hasn’t been unleashed outside of that. Milton has more than 50 yards rushing in both games and has been efficient in the passing game, completing 64 percent, but the defense needs to help this unit out. After coach Jim Harbaugh’s first season without a top-10 defense at Michigan last year, the group still looks vulnerable on the back end.

Penix Jr. ready to break out

It was less than a year ago when Michael Penix Jr. had surgery on his clavicle and missed the end of the season. He was completing 68 percent of his passes and had 10 TDs and four interceptions. A slow start against Penn State’s defense is understandable and he came through in the clutch before clicking against Rutgers. Running back Stevie Scott III will help take the pressure off Penix while Philyor and Peyton Hendershot are dependable receivers. Philyor has 10 catches for 173 yards and a touchdown.

On the other side of the ball, the Hoosiers have a handful of playmakers. Defensive back Taiwan Mullen has 2.5 sacks and 15 tackles. Linebacker Micah McFadden has 12 solo tackles (16 total) and Jamar Johnson has an interception and a forced fumble.

History says Michigan takes care of business as it has against the Hoosiers every season since 1987. The Wolverines are 48-9 as favorites since 2015 and cover a 3.5 point spread 48.5 percent of the time. However, I see this game coming down to the wire. Michigan will ultimately win but I have Indiana covering at home. Both teams hit over 55.5 total points more often than not and the average total in Bloomington is 58.6 points, so take the over here.