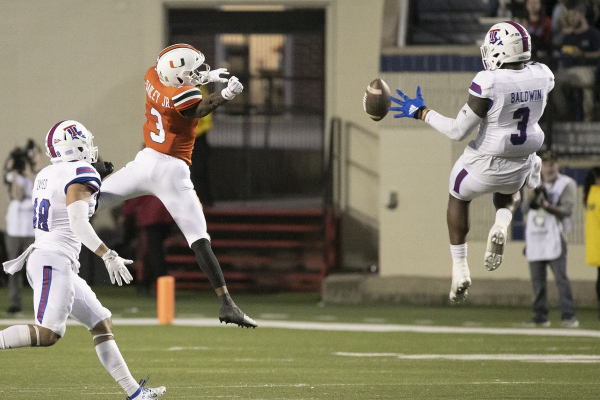 The Miami Hurricanes and the NC State Wolfpack will be facing off this Friday, at the Carter-Finley Stadium, Raleigh, North Carolina, USA, in a College Football match by 7:30 PM EST. The Miami Hurricanes have put up a good fight this season, having lost only one game to the Clemson Tigers, a worthy opponent.

The Miami Hurricanes were victorious in their last match against the Virginia Cavaliers with a 19-14 final score. The 1st quarter of the match ended in a 7-7 tie; however, the Virginia Cavaliers failed to score in the 2nd and 3rd quarters, and the Hurricanes ended the 4th quarter with a touchdown. The Miami Hurricane wide receiver, Michael Harley, was the head of offense in this matchup, catching ten passes for 170 yards, with one touchdown, and this was his first game receiving over 100 yards.

The Miami Hurricanes defense only allowed the Cavaliers a single touchdown in the first 54+ minutes. However, the Hurricanes defense did not make any electrifying plays, and they missed many tackles. The Virginia Cavaliers’ had only seven points up until the 94-yard touchdown drive by Brennan Armstrong, who passed 35 yards to Ra’Shaun Henry, and cut down Miami’s lead to 19-14 with 5:27 left on the clock. The Virginia quarterback, Brennan Armstrong, passed for 181 yards with a touchdown and 91 yards on the ground.

The Miami Hurricanes are favorites at -385 on FanDuel, with NC State Wolfpacks at +290.

Miami wants it all

The Hurricanes, ranking number 4 in the 2020 ACC standings, will be coming into this matchup with every intention of winning. However, the Hurricanes have their fair share of injuries and health complications including, Isaiah Walker Jr., Brevin Jordan, Tate Martell, Zalon’Tae Hillery, Kai-Leon Herbert, Avantae Williams, and Navaughn Donaldson. These players’ availability for Friday’s game is uncertain.

The Wolfpacks hoping for redemption

The Wolfpacks will be looking to regain their stance by winning Friday’s match, as beating the Hurricanes will put them back on the winners’ map. This team, however, have 10 players’ availability for the game in question due to injuries and other health complications, including Khalid Martin, Devon Betty, Ricky Person Jr., Jasiah Provillon, Timothy McKay, Tanner Ingle, Trent Pennix, Chris Ingram, Louis Acceus, and even Devin Leary’s fitness for the match on Friday are in doubt.