LSU Chalks Up Another Title For The Southeastern Conference 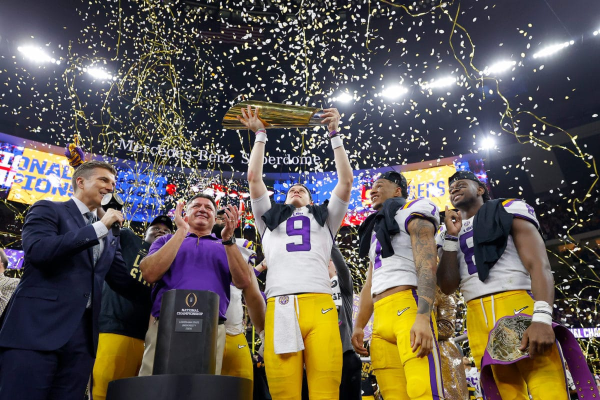 What grew into a dream season for LSU quarterback Joe Burrow finished in perfection as the Tigers from the Bayou defeated the Tigers from Clemson by a score of 42-25 to win the College Football Playoff National Championship on Monday night.

While raking in another title for the Southeastern Conference, Burrow filled the trophy case by putting up a record-breaking season that earned him the Heisman Trophy. In the biggest game of his career, the kid from Ohio threw for 463 yards, five touchdowns, and no interceptions, and ran for another TD.

The season certainly ended perfectly for Burrow and No. 1 LSU, but Monday night’s game didn’t start that way. No. 3 Clemson had earned a record of 14-0 coming into the championship game, and it validated its place in the New Orleans Superdome by rushing out to a 17-7 lead.

Clemson quarterback Trevor Lawrence, who entered the contest with a record of 25-0 in college, started the scoring with a one-yard run. The problem for the Tigers wearing orange and white was how LSU was able to frustrate Lawrence from that point on.

While Burrow was throwing TD after TD, Lawrence would finish the game 18 of 37 for 234 yards and no touchdowns through the air.

LSU had shown they were the best team in college football by racking up six top 10 wins coming into the CFP National Championship Game. By earning their seventh top 10 win and completing the year with a record of 15-0, the Tigers proved they had no equal.

Dominance of the Southeastern Conference

Since the start of the College Football Playoff in 2014, representatives from the SEC have won three of the six titles (Alabama 2015, Alabama 2017, LSU 2019), but that’s only a taste of just how dominant the SEC has been.

Dating back to the BCS days, four different teams from the SEC have racked up 10 of the last 14 championships. In that time, only Florida State, Ohio State, and Clemson have been able to overcome the mighty SEC.

This sort of college football supremacy began with a run of seven straight titles for the Southeastern Conference that kicked off with Florida’s championship in 2006. Since then, the likes of Tim Tebow and Cam Newton have led their respective teams to the pinnacle of the sport.

In the fourth quarter of the National Championship Game, Burrow hit Terrace Marshall Jr. for a 24-yard score. That would mark Burrow’s 60th touchdown pass of the season, setting the new single-season record in NCAA FBS play.

Now, the senior quarterback will likely add being the top overall pick in the NFL Draft to a resume that includes a Heisman Trophy and a National Championship.

What’s Next for Burrow, LSU?

The Cincinnati Bengals are on the clock for the 2020 NFL Draft, and how could they not use their top overall pick on the man who took down Clemson with six total touchdowns Monday night?

Right now, Burrow is the odds-on favorite to be taken No. 1 overall in the draft with odds of -1150. Next on the list of favorites is Ohio State defensive end Chase Young, but with odds of +550 to be drafted first, he’s nowhere near Burrow.

So, while Burrow appears to be headed to Cincinnati, what’s next for the LSU Tigers?

As LSU coach Ed Orgeron turns his attention to the 2020 season, he’ll be able to motivate his team by telling them that despite going 15-0 this season, the Tigers own the fifth-best odds to win the 2020 championship at +1400.

The Clemson Tigers lead the way with odds of +200, largely because they’ll retain the services of Lawrence for another season. Following Clemson are Ohio State (+350), Alabama (+700), and Georgia (+750).

The Southeastern Conference is now set to compete for another CFP National Championship next season as three of the five teams with the best odds heading into 2020 hail from the conference.