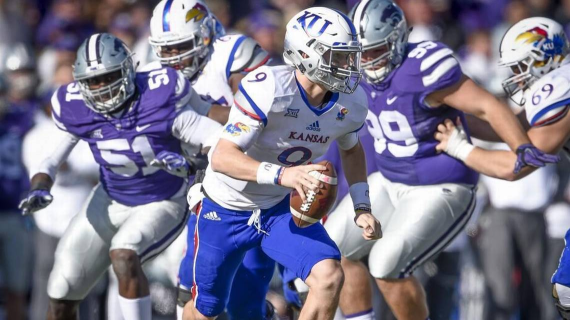 This Saturday is the 118th matchup all time for the Governor’s Cup, pitting the Kansas Jayhawks (0-4) against the #20 Kansas State Wildcats (3-1). Kansas leads the all time series 64-48-5, but it’s worth noting the Jayhawks haven’t beaten the Wildcats since 2008.

Kansas comes limping into this matchup after a 38-17 loss to West Virginia last weekend on the road. Kansas led 10-0 in the first quarter before giving up 38 straight points to the Mountaineers. They then hit an all time backdoor cover (they were +22 on most sites) with a 92 yard kickoff return for a touchdown with 1:42 left. Kansas is 0-3 in the Big 12 and has lost by an average of 31 points in their conference games.

Kansas St on the other hand is rolling as of late and enters this weekend’s matchup having won three straight, and are currently tied for first atop the Big 12 standings. Last week the Wildcats beat TCU 21-14 on the road thanks to an AJ Parker 37 yard pick-6 in the third quarter. KSU’s offense struggled, only gaining 289 yards, as they continue to deal with the loss of starting QB Skylar Thompson, who is out for the year.

DraftKings currently lists Kansas St (-20.5) as the favorite, with the Over/Under set at 48.5.

This Kansas defense is awful. No wait, that’s an insult to awful. This Kansas defense is dreadful. In their three Big 12 games, they have given up 496.3 yards per game. They rank 70th in the NCAA in scoring defense (42.5 PPG), and have really struggled vs the run as they give up close to 230 yards per game. Teams are averaging 6.0 yards per play vs the Jayhawks, and WVU outgained KU 544 to 147 last week. Things don’t get any better on the offensive side of the ball, as they are scoring just 15.2 PPG, average 3.6 yards per play, and are 71st in pass offense at 133 yards per game. Yuck.

Kansas State is led by their defense. They are 29th in scoring defense, as they only allow 26 PPG, and currently rank inside the top 10 in turnovers forced. Offensively the Wildcats are middle of the pack at 30.2 PPG, 366 YPG, and 131 rush yards per game. With Thompson being out for the rest of the season, it’s clear that Head Coach Chris Klieman will rely on RB Deuce Vaughn and the defense to keep them in games. Freshman QB Will Howard started for KSU last week vs TCU and was 8-19 for 117 yards and 1 INT. Howard did do some damage on the ground though at least, as he was their leader rusher with 86 yards.

Last week vs WVU, starting QB Miles Kendrick (14/23 95 yards, 1 TD, 1 INT) struggled to get anything going for the Jayhawk offense. Kendrick has only thrown for 3 touchdowns all year, and currently carries an abysmal 15.3 QBR heading into a tough matchup with a strong KSU defense. Sophomore RB Velton Gardner has yet to see success on the ground as well. Last week he gained just 43 yards, with a dismal 31 yards the week previous vs Oklahoma State.

This offense will struggle all year because of their inability to keep games close. Kendrick has been sacked nine times in the last two games, and will be forced to throw the ball all game while the Jayhawks undoubtedly trail. Look for a couple INTs from Kendrick this week against a KSU defense that ranks in the top 10 for takeaways.

Freshman Will Howard stepped into the starting QB role after Skylar Thompson went down with a season ending injury. Howard has faired well enough to go 2-0 in his two starts (15-31, 290 yards, 1 TD, 1 INT), and the Wildcat offense won’t ask too much of him. Freshman RB Deuce Vaughn has 517 yards from scrimmage this year (238 rush, 279 receiving). Vaughn’s ability to hurt opponents both running and receiving will continue to take pressure off Will Howard as he navigates his first season through the Big 12. The Wildcats are also lead by Senior TE Briley Moore in the passing attack. Moore has 14 catches for 201 yards and 2 TDs so far this year. Look for Moore and Vaughn to have big games this week.

This total is low for a reason. Normally in the Big 12 we see some high totals (Texas v. Baylor is 60.5), but because this game is so one sided, Vegas is keeping the number down. Kansas won’t score much versus a tough K-State Defense, and the Wildcats don’t have enough offensive firepower to get to the over themselves.

I generally lean towards staying away from a 20+ spread, but this Kansas team is so bad. While they may start out competitive in games (see last week), they don’t have the talent to hang with Big 12 opponents for four quarters.

Keep in mind, Kansas State jumped up two spots from #22 to #20 with their win vs a down TCU side last week. They’ll want to impress with a big win vs a terrible opponent, so look for them to cover the 20.5.