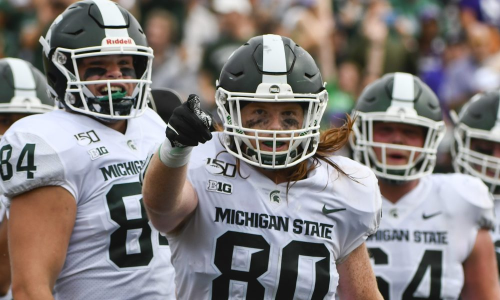 On Saturday the tenth ranked Indiana Hoosiers (3-0) head to East Lansing to take on the Michigan State Spartans (1-2) in a Big 10 showdown.

Indiana enters the game after a 38-21 win over Michigan in a game that showed just how dominant the Hoosiers can be. They were up 24-7 at halftime, outgained Michigan 460-357, had no turnovers, and held the Wolverines to just 13 rushing yards. QB Michael Penix Jr threw for 342 yards and 3 touchdowns, while RB Stevie Scott added 97 yards and 2 touchdowns on the ground. WRs Whop Philyor (11 catches 79 yards) and Ty Fryfoyle (7 catches, 142 yards, 1 TD) both showed out, as Indiana remained undefeated and continues to climb the national rankings.

Michigan St comes into this game after a disappointing 49-7 loss to the Iowa Hawkeyes. The Spartans entered the game off the heels of an impressive upset at rival Michigan just a week before, but this game was over at halftime. Going into the break, Michigan St trailed the Hawkeyes 35-0, and didn’t score until the 4th quarter. Iowa outgained MSU 405-286, ran for 226 yards on the ground, and forced 3 Spartan turnovers. MSU QB Rocky Lombardi had an abysmal line (17-37, 227 yards, 3 INTs) and the Spartans offense as a whole had just 10 first downs. This was a huge letdown game for a team that looked like they had turned the corner after a big upset win the week prior.

Indiana is a tough team to figure out on the offensive side of the ball. They rank 116th in rushing offense and 101st in total offense per game. However, they rank 26th in scoring offense at 37 PPG, and their total yards per game have increased every week. The Hoosiers have just two turnovers on the season, and both came week 1 vs Penn State.

While QB Michael Penix’s numbers haven’t been great, he has a solid 7 touchdown to 1 INT ratio. Stevie Scott has led Indiana on the ground with 235 yards and 4 touchdowns, while Whop Philyor has had a fantastic start to the season as he has 252 yards on 21 catches and has added a TD as well. Indiana is winning games because of their ability to flip the field by winning the turnover battle.

The Hoosiers have gone two straight games without a turnover, while forcing 5 turnovers during that time. They have forced at least two turnovers every game, and since giving up 250 rushing yards to PSU, have allowed just 67 rushing yards per game.

Michigan St ranks 119th in rushing offense, 106th in scoring offense, and 90th in total yards per game. QB Rocky Lombardi (65-122, 869 yards, 6 TDs/5 INTs) has no weapons to get the ball to, and the Spartan offense is lacking talent in a conference that demands it. RB Jordan Simmons has just 132 yards and no touchdowns in 3 games this season.

Leading receiver Ricky White has just 10 catches with one score. As a team, they have 1 rushing touchdown all season and that came on a 1 yard run by Tyler Hunt. Defensively, the Spartans have allowed teams to rush for at least 100 yards in every game and have given up an astonishing 11 rushing touchdowns in just three games. New Head Coach Mel Tucker thought the team was on the right track after the Michigan win, but was brought back to Earth after the blowout loss to Iowa.

Currently DraftKings lists Indiana (-7.5) as the favorite with the total set at 51.5. Michigan St can’t stop anyone, especially on the ground, and that’s why I’m taking Indiana to cover. I think Mel Tucker is going to have a hard time building the Spartans back up after a huge letdown game, and Indiana is rolling right now. This game won’t ever be close, and I will also take Indiana to cover 1H when that gets posted.

This Hoosier Defense is underrated. They force a ton of turnovers, and other than the Penn State game, have limited teams offensively. Because of that, I like the Under. RB Stevie Scott is going to get a ton of carries, the Hoosiers will dominate the time of possession, and run this game out in the second half.