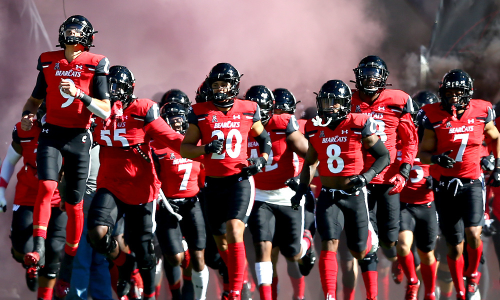 AAC college football showdown returns this Saturday afternoon at the Nippert Stadium, where Cincinnati Bearcats host the Houston Cougars. The game kicks off at 3:30 PM EST and will be live on ESPN. Cincinnati is having one of their best seasons so far, and they currently top of the standings in the American Athletic Conference (AAC).

On the other hand, it has been a disappointing season for Houston, who are seventh in the standings of the AAC. The team’s last three games have seen them record two losses with no signs of improvement.

Going into this matchup, the Cincinnati Bearcats have been impressive throughout the season so far. The team heads into this game with an excellent win record of 5-0, which has seen them cover the spread in three of their last games.

Cincinnati played Memphis in their previous game, and it was considered one of their most outstanding performances of the season, where they emerged with a win of 49-10. This season has seen Cincinnati record an average of 39.6 points per game while their defense has only given up 12 points per game.

Desmond Ridders, Cincinnati’s quarterback, leads the team with 994 yards thrown, ten touchdowns, and has five interceptions to his name with a completion percentage of 64.8%. Ridder has also managed to rush for 291 yards. Other notable mentions include Gerrid Doaks, who holds a team-high in rushing with 327 yards and six touchdowns, while Jerome Ford has managed 227 rushing yards and four touchdowns.

On the defensive end, Cincinnati is led by Jarell White, who has 49 tackles inclusive of 31 solo tackles. Ahmad Gardner has three interceptions, while the other defensive players have managed two interceptions. The team’s defense is expected to be in top shape to record another win in this game.

This matchup finds the Houston Cougars in a challenging position. Their season hasn’t been off to a good start, and they have now lost as many games as they have played, including the last one against UCF.

The Cougars were slight underdogs going into their last game, their offense didn’t put much of a show, and they ended up losing 44-21. Houston has an average of 33.2 points per game so far this season, and their defense has allowed 34.8 points per game. Houston’s quarterback, Clayton Tune, has thrown for 1208 yards with eight touchdowns and four interceptions.

Houston’s Marquez Stevenson leads the team in receiving yards with 278, along with 16 receptions, and three touchdowns. The team-high in catches is held by Keith Corbin, 17 for 213 yards, while Trevon Bradley has managed an impressive 15 grabs for 202 yards so far this season.

Houston is defensively led by Grant Stuard, who has 33 total tackles that include 17 solo tackles. Since they face a great defensive team in Cincinnati, Houston will have to play cautious with the ball.

Both teams head into this matchup with several of their players out with injuries. Most of these players are out of Saturday’s game entirely, while others are still questionable. Houston’s Marquez Stevenson, Donovan Mutin, Mulbah Car, and Patrick Paul are some of the questionable players for Saturday’s game.

On the other hand, Cincinnati’s Bruno Labelle, John Williams, Jeremy Cooper, JaVon Hicks, Alec Pierce, and Jaquan Sheppard are also all questionable for this game. McClelland is one of the players who is out indefinitely for the Cincinnati Bearcats.

The following are the Houston vs. Cincinnati DraftKings odds;

The FanDuel NJ odds for the Houston vs. Cincinnati game are;

Cincinnati’s last win was a blowout, and it is expected that they will have a repeat performance against Houston.

Offensively, Houston has struggled a lot this season, and this will make it easy for Cincinnati to come up with a win in the game and cover the spread.

For more information on the Southern Alabama vs. Georgia Southern Betting/Odds/Picks leave a comment and we’ll be sure to get back to you.