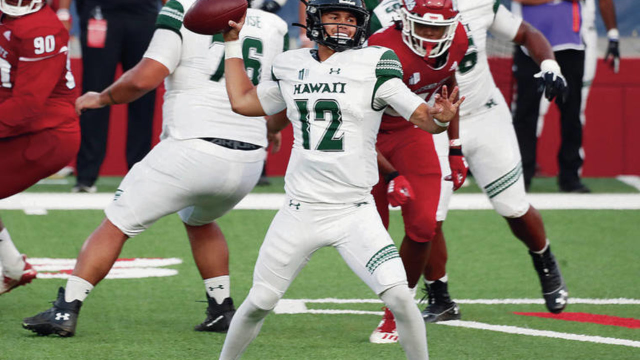 The 24th meeting for the Paniolo Trophy will take place in near sub-freezing temperatures when the 1-0 Hawaii Rainbow Warriors travel to Laramie, Wyoming, to take on the 0-1 Wyoming Cowboys as 1-point underdogs at DraftKings Sportsbook in a matchup that boasts a 62-point OVER/UNDER.

The Mountain West finally opened up conference play last week, and this weekend is not short on rivalry featured matchups. Hawaii and Wyoming have been battling for the Paniolo Trophy since 1979 as the two teams switched back and forth between the WAC and Mountain West Conference. The Cowboys have won the trophy 14 times compared to Hawaii’s nine.

This will be an offensive shootout, no doubt. The Pokes lost a close 34-37 game to Nevada last week while the Rainbow Warriors put up 34 in their first win of the year. The underlying factor will be the weather, sadly. Hawaii attempted to get in some outdoor practices this week in Colorado before heading up the I-25 to Laramie, but an October snowstorm in the Rockies suppressed the chance to make that happen. Therefore, Hawaii will have to rely on its game plan and confidence from the week prior.

The predicted forecast for kickoff calls for 38 degrees and windy… sounds like another glorious day in Laradise.

This will be the second game in the Todd Graham era, which got off to a booming start when Hawaii downed Fresno State 34-19. Graham debuted his run-and-gun offense with over 300 yards on the ground led by his sophomore quarterback Cheven Cordeiro who rushed for 116 yards and two touchdowns on 13 total attempts. Running back Miles Reed also had a 100-yard game with 109 yards on 21 rushes.

Cordeiro definitely turned a lot of heads in his fourth career start. He played in 12 games with three starts in 2019 where he led the Rainbow Warriors to significant wins over Arizona and Utah State. He will have a much tougher challenge this weekend against a Cowboys’ defense that gave up only 76 yards on the ground in Wyo’s loss to Nevada.

Graham’s offense will look to utilize the passing game more than their Week 1 matchup considering Wyoming surrendered 420 yards and four touchdowns to Nevada’s quarterback Carson Strong. The former Sun Devil head coach was known for his versatile offensive playbook that will only add to the productive passing game Hawaii had in 2019 where they averaged 337 yards per game through the air.

Last week, the Cowboys did lose to the Wolfpack of Nevada in a close offensive shootout that saw over 850 yards of total offense from both teams combined. The Pokes have a lot of new talent on the defensive side of the ball that is still trying to figure out its’ identity and flow. However, the offensive young guns are already showing glimpses of greatness, starting with red-shirt-freshman quarterback Levi Williams who had a 21-yard touchdown run and another 10-yard scramble at another point in the game.

Williams finished the day with 40 yards and two touchdowns on the ground while throwing for 227 yards, a touchdown, and an interception.

Overall, the Cowboys created 15 plays of 10 yards or more. Three of those went to redshirt-freshman wide receiver Isaiah Neyor who led the team with 102 yards receiving. It was the first 100-yard receiving game by a Cowboy since 2018.

This is a close on paper and that’s reflected at the bookies. DraftKings Sportsbook has the Pokes at -115 on the moneyline so Wyoming could be decent value against a Hawaii side that has not played in a cold-weather game since last season.

Be confident betting in either team to go OVER their respective team totals.