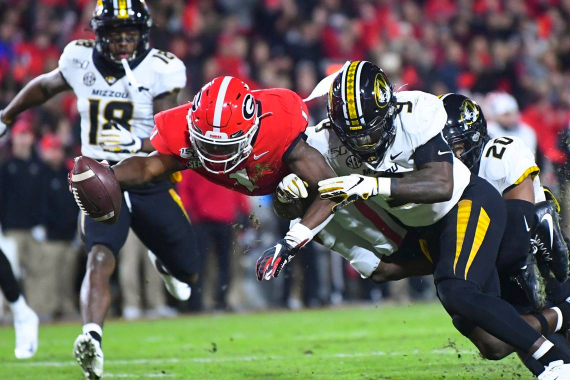 On Saturday the #12 ranked Georgia Bulldogs (4-2) head to Columbia to take on the Missouri Tigers (2-3) for an SEC showdown.

Georgia enters the game after suffering a 44-28 loss to the 8th ranked Florida Gators. Despite being up 14-0 in the 1st Quarter, the Bulldogs went into halftime trailing 38-21. The Bulldogs only managed to get 12 first downs in the entirety of the game, were outgained 571-277, and had three turnovers. All in all, it was a devastating defeat that now leaves them a game back of the Gators in the SEC East.

Florida QB Kyle Trask diced up the horrendous Georgia secondary to the tune of 474 yards with 4 touchdowns and just 1 INT. RB Zamir White was the lone bright spot as he ran for 107 yards on 7 carries and a touchdown, although the bulk of the yards came on an early 75 yard scamper for a touchdown.

Missouri is coming off a bye week that followed a 41-17 loss to the Florida Gators. The Tigers were up 7-6 after a 59 yard pick six from Jarvis Wade, however they would be outscored 35-10 the rest of the way. The Tigers were outrushed 169-40, and outgained in total yards 514-248.

It was a demoralizing loss for a Missouri team that came into the game on a two game win streak. Tigers QB Connor Bazelak was 26-40 with 208 yards, but had no touchdowns, and the whole Missouri offense struggled to move the ball. Florida QB Kyle Trask went for 345 yards and 4 touchdowns vs. a down Missouri secondary.

Georgia has been buoyed by their stingy defense so far this year. The Bulldogs rank 23rd in the country in scoring defense as they only allow 20.8 PPG. They rank 4th in rush defense and 29th in total defense, as their only real weakness appears to be their pass defense which ranks towards the bottom of FBS at 93rd overall. Their top 5 rush defense as only allowed two 100 yard rushing games all year, as teams only average 82 rushing yards a game.

The Bulldogs offense has been relatively disappointing as they rank 63rd in scoring offense, 88th in passing offense, and 80th in total offense. QB Stetson Bennett (85-153, 55%, 1167 yards, 8 TDs/6 INTs) has yet to throw for 300 yards in a game this year. RB Zamir White has had a solid year as he has 509 rushing yards and ranks in the top 20 with 7 rushing touchdowns. WR Kearis Jackson is the Bulldogs’s leading receiver with 396 yards on 27 catches and 2 touchdowns. This Georgia team goes with Zamir White. Stetson Bennett hasn’t shown that he is able to play well enough to carry this team on his own yet.

QB Conner Bazelak has barely thrown for 1000 yards, and has just 4 touchdowns on the season. Missouri doesn’t have a WR that ranks in top 100 in receptions or yards per game, and they are 100th in the country in turnover margin. It’s a miracle this Tigers team has won two games.

Currently DraftKings lists Georgia (-11.5) as the favorite, with the total set at 48.5. It’s a low total, but it makes sense when you look at Missouri. Their offense is putrid, and the lack of talent surrounding Bazelak is a real issue for the Tigers in an always tough SEC. Georgia’s passing game should have a get right game here, and put up some big numbers against the Missouri secondary. Look for RB Zamir White to have a big game as well, and that should open up some deep shots in the passing game.

If you’re able to, this is a good spot for a same game teaser. Tease UGA down to -6.5 and then bump the total up to 58 and take the under. Georgia will win by more than a touchdown and Missouri can’t score.

Now, if you are not able to do same game teasers, I do think UGA covers the 11.5, but would recommend getting your bet in now before that line balloons as we get closer to the opening kick.