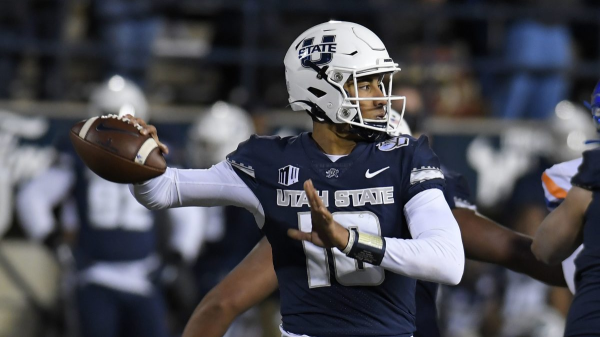 College football fans need to buckle up because starting on Friday, the craziness that is known as bowl season begins. One of the first games on the docket features the Utah State Aggies (7-5) and the Kent State Golden Flashes (6-6) squaring off in the Frisco Bowl.

While neither of these two teams had overly strong campaigns this season, they will still be looking to finish out strong, ending their respective seasons with a win. Kickoff for this one is scheduled for 7:30 pm ET.

It was certainly a rough season for the Aggies as they had hoped to contend for the Mountain West title but instead struggled with big losses at inopportune times. Coming into this one, they have won three of their last four, but the one loss was a big one to Boise State.

In fact, except for a loss to Wake Forest, every time they lost, it was big, as they lost by 28 to BYU, 24 to Air Force and 36 to top-ranked LSU. Still, despite the frustrations, the Aggies will look to win the final game and end with an 8-5 mark.

Kent State has never won a bowl game, though it is trying to reverse its fortunes on Friday. The Golden Flashes finished just 6-6, but they did win three in a row to finish the season. Those three wins were over Buffalo, Ball State and Eastern Michigan.

Still, the Flashes will have to play well to top Utah State and will rely on a running game that really started to peak as the season was coming to a close.

The Aggies come into this one as 6.5-point favorites for the game at Toyota Stadium. The over/under is set at 67.5.

Defensively, it was Utah State that held the advantage, as the Aggies rank 83rd in the nation, giving up 31 points per game. The Golden Flashes rank 88th, allowing an average of 31.8 points per game.

Love Looks To Leave With A Win

For Utah State quarterback Jordan Love, the Frisco Bowl will be his final college game, as he has announced that he will be entering the NFL Draft but opted to still play in his final college game. Compared to last year, Love had a pretty inconsistent season and would love a big bowl game to help his potential draft stock. On the season, Love threw for 3,085 yards, 17 touchdowns and 16 interceptions.

On the ground, the Aggies have been led by Gerold Bright, who has rushed for 827 yards and eight touchdowns. Jaylen Warren has also had a respectable season, going for 561 yards and five scores.

The Golden Flashes certainly did their nickname justice down the stretch as Kent State was able to take advantage of teams by pounding the run game. It all starts with quarterback Dustin Crum, who has thrown for 2,336 yards, 18 touchdowns and just two interceptions. He has also had success on the ground, rushing for an additional 560 yards and five scores.

Utah State Wins, But Can It Cover?

I can’t say that I love either team in this matchup. Utah State expected more and could come out sluggish, given that the Frisco Bowl isn’t exactly what it had in mind at the beginning of the season. Kent State is probably the inferior team but will be amped up as it is playing in just the fourth bowl game in school history and looking for its first win.

If Kent State can get the run game going, it could be a successful night for the Golden Flashes. For my money, though, I am giving the edge to Utah State.

The Aggies play a stiffer schedule, and I think Love will try to make up for a frustrating season in this one bowl game. I wouldn’t blame you if you took a chance on Kent State with the points, but I am rolling with Utah State despite laying the 6.5 points.