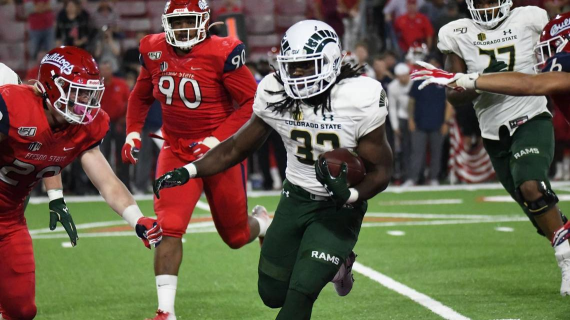 Thursday night, the Fresno State Bulldogs (0-1, 0-1) host the Colorado State Rams (0-0) in a Mountain West showdown of two teams with first year head coaches. New Head Coach Steve Addazio takes over a Colorado State side that won just 4 games last season, going 3-5 in the conference. Fresno State comes into the game off a 34-19 loss to Hawaii, a game in which the Bulldog gave up 552 total yards.

Trailing by only 4 at the half, Fresno State was outscored by Hawaii 17-6 in the second. The Warriors had no trouble moving the ball on the ground, as they rushed 51 times for 315 yards for an average of 6.2 yards per carry. To make matters worse, the Bulldogs turned the ball over 4 times, including 3 Ints from QB Jake Haener (17/31, 54%, 289, 1 Td, 3 Ints). Haener will look to rebound against a Colorado State defense that was ranked 7th in the country against the pass last year, only allowing 181 passing yards per game.

Odds: Currently DraftKings lists Colorado State (-1.5) as the favorite, with the total set at 59.

Last week against Hawaii, the Fresno State defense allowed the Warriors to have two 100 yard rushers as both Miles Reed and Chevan Cordeiro eclipsed the century mark. Colorado St was 103rd in the country last year running the ball, averaging 132 rushing yards per game. Fresno St ranked 79th in FBS last year against the run, allowing over 160 rush yards per game. It will be interesting to see how the Rams approach this game. Will they use the same game plan as Hawaii and try to exploit the Bulldogs inability to stop the run? Or will they trust QB Patrick O’Brien to continue his success from last year through the air?

In 2019, Colorado State ranked 91st in FBS in terms of scoring defense as they gave up 31.2 PPG. Offensively they ranked 71st in FBS in scoring, averaging 28.1 PPG. They struggled to run the ball (132 a game), but were extremely successful throwing it with O’Brien. The Rams had the 14th best passing offense in the country as they threw for more than 305 yards per game just a season ago. Look for Dante Wright to step up in the WR position and build off a successful campaign from a year ago (56 catches, 802 yards, 4 touchdowns). Fresno St was 107th last season against the pass, allowing almost 260 passing yards per game. Last week Hawaii ran the ball so well that they never had to throw it. Look for Steve Addazio to try to sling it and take advantage of a weak Fresno pass defense.

Fresno St Senior RB Ronnie Rivers (18 carries, 79 yards, 4.4 avg, 1 TD) had a tough outing vs. Hawaii last week. Last season Rivers rushed for a career high 899 yards and had 13 touchdowns in a successful Junior campaign. Colorado St ranked 104th in the country in terms of rushing defense just a year ago, allowing 195 yards on the ground per game. Assuming the Bulldogs don’t fall behind by too much, look for Rivers to dominate the ground attack.

The Bulldogs need to have a successful rushing attack for them to stay in the game. Jake Haener doesn’t have the talent to keep them in games by himself, and will rely on Rivers to eat up big chunks of yards.

Who Starts at QB for Rams?

QB Patrick O’Brien ranked 26th in the country last year in passing yards per game with 254.8. Interestingly enough, Addazio has yet to name a starter, as Temple transfer Todd Centeio has given O’Brien a tough battle through camp. O’Brien did miss some time at the beginning of camp for an undisclosed reason, and it may just be a case of Addazio creating some doubt for the Bulldog defense before the game. It would seem odd to bench O’Brien in favor of a transfer, and this may be a case of wanting both players to get reps in case of a positive COVID test. Look for whoever is behind center for the Rams to throw all night and take advantage of a weak Fresno St secondary.

Fresno State’s inability to stop Hawaii’s rushing attack is extremely concerning. Hawaii ranked 100th in FBS in 2019 running the ball, and the Bulldogs were gashed by them all game. While the Rams wont want to pound the ball, they’ll look to use the run to set up Patrick O’Brien and the strong passing game. I like Colorado State the cover the 1.5, and blow out the Bulldogs in Addazio’s debut.