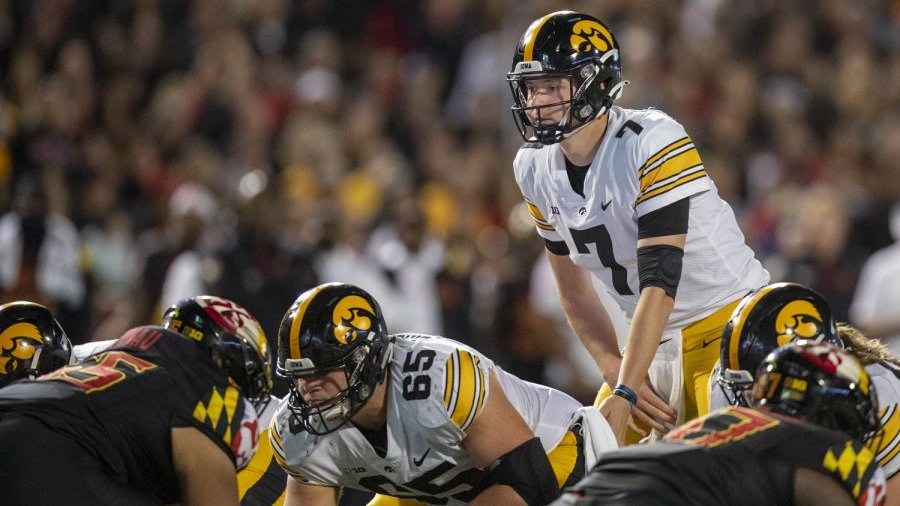 Another wild weekend of college football is in the books, and it is time to look ahead to what is in store for this week.

No matter their respective records, the Red River Rivalry matchup between Oklahoma and Texas is always a big game. But with Oklahoma displaying some early shakiness and Texas surging again since their ugly loss to Arkansas, Saturday’s showdown at the Cotton Bowl is a big matchup with the Big 12 title and potentially the College Football Playoff in mind.

While this matchup is the biggest show in town in terms of notoriety, the biggest game of the week in terms of rankings and stakes is Penn State’s visit to Iowa. With Oregon, ranked third last week, going down at Stanford, Iowa City will play host to a meeting between two of the top four teams in this week’s major polls.

While this is a rare moment for Iowa as a program, is it actually a bigger game for Penn State? The Hawkeyes would still control their destiny in the Big Ten West and face no other ranked teams. A close loss wouldn’t cause a precipitous drop in where Iowa stands, presumably. And if they were to run the table and win the Big Ten title game, there is a good chance they could still end up in the CFP.

Penn State, meanwhile, plays in a division with three other teams ranked in the top 11 in Michigan, Michigan State, and Ohio State. They face the latter two on the road, and the Nittany Lions would have no margin for error the rest of the way for either the Big Ten East title or their CFP hopes.

Oklahoma-Texas and Penn State-Iowa are two of the four ranked vs ranked matchups on this week’s college football schedule. The other two are in the SEC, where Auburn hosts Georgia and Ole Miss hosts Arkansas.

Which top teams should be on upset alert against unranked teams? Stanford visits Arizona State, fresh off of their comeback win over Oregon. It would be the most Arizona State thing for them to lose this week after an impressive win at UCLA.

Can Nebraska challenge Michigan? The Wolverines appeared to be ripe for the picking at Wisconsin after putting up zero second-half points against Rutgers. But they promptly destroyed the disappointing Badgers in Madison to improve to 5-0. Nebraska held their own against Oklahoma and Michigan State, losing by seven in Norman and in overtime in East Lansing. It wouldn’t be a surprise to see them at least push Michigan until the end.

Notre Dame’s unbeaten start was ended by Cincinnati, who put in a standout defensive performance in South Bend. This week the Irish must rebound at Virginia Tech, who’s off to a 3-1 start this season. Lane Stadium is one of the toughest environments in college football, and it will be rocking for Notre Dame’s visit. Blacksburg isn’t a fun place to go for opposing teams at any given time, but it is an even more daunting matchup for a team that has issues on offense.

The matchups involving ranked teams aren’t the only ones worth following or betting on. There are several notable matchups from both the Power 5 and G5 that are worth your attention. In the Mountain West, Air Force hosts undefeated Wyoming. And in Conference USA, two of the league’s better teams meet in Birmingham as UAB hosts FAU. Shifting back to the Power 5, the TCU-Texas Tech matchup in Lubbock should not be short on offense.

The college football action starts this week with two interesting Thursday night games. Coastal Carolina, who’s quietly motoring in their quest for a New Year’s Six bowl, travels to Arkansas State. Arkansas State has had a rough start in their first year under Butch Jones, but the Red Wolves can put up points. In the other game, Houston visits Tulane. Tulane was expected to make some noise in the American this season, but the Green Wave have started 1-4. Can they get their season back on track against the Cougars, whose lone loss is to Texas Tech?

All odds listed below are via FanDuel Sportsbook as of Monday, October 4, 2021.

As much as we’d like to cover every single one of the college football matchups that we have our eye on, there are only so many hours in the week. So here’s a quick rundown of the matchups we will be providing in-depth previews for this week on Betting News.

Are the Cougars finally turning the corner in Dana Holgorsen’s third season? Last Friday, they went into Tulsa and walloped the Golden Hurricane 45-10. Yes, Tulsa is now 1-4, but two of those losses were at Ohio State and Oklahoma State. They lost to the Cowboys by only five, and they trailed the Buckeyes by seven in the fourth quarter. So for Houston to go on the road and thoroughly dominant them for four quarters is an extremely impressive result.

Tulane is also 1-4, but this is a team that pushed Oklahoma all the way in a five-point loss to open the season. They have lost three in a row and just gave up 52 points to East Carolina, but don’t dismiss the Green Wave’s chances to at least put a scare into the Cougars. This will be a good test to see if the Cougars actually have turned the corner. Wins like last Friday’s win are nice and all, but you have to maintain your focus and keep it going.

If your first thought is “why is Arizona State favored by double digits over a team that just upset Oregon, even if it is at home?”, then we are sharing the same thought.

The Sun Devils are certainly having more success than most envisioned they would under Herm Edwards, and they looked great in their win at UCLA. But there is no circumstance in which Arizona State, no matter how good that win at UCLA was, should be favored by this much over a team that just did what Stanford did. You can say that Oregon did all they could to give the Cardinal the game, but they still had to execute and take advantage.

This week would be a good time to see Oklahoma’s best. The Sooners are still undefeated, but they lag behind even Cincinnati because their only dominant performance on both sides of the ball was against Western Carolina.

Similarly, how good is Texas? After hanging 70 points on Texas Tech, they were rather fortunate that TCU is pretty good at beating themselves and grossly underutilizes Zach Evans. Otherwise they absolutely would not have left Fort Worth with a win.

I’m not a firm believer in either one of these teams, but this will be an entertaining contest, as it often is.

If Georgia wants to be the best, these are the games that matter as much as the games against the likes of Clemson, Florida, and Alabama. For all of the success that the Bulldogs have had under Kirby Smart, this is the just the kind of situation where they have tripped themselves multiple times.

Auburn is a highly confusing team, but if you have watched college football for long enough, you know Auburn’s history of winning games that they shouldn’t win and on plays that make you wonder who their administration made a deal with years ago. And after that weird win over Georgia State and an equally Auburn win at LSU, it might be a wise idea for Georgia folks to start making some deals of their own.

From an entertainment standpoint, there are other games in the late afternoon window that will be more interesting to watch, at least for the first few quarters. But it will be interesting to see if the Hawkeyes are indeed ready to take that next step. They dismantled Maryland in what looked like a potentially tricky game, but this is a challenge on a different level for them and for Penn State, whose win at Wisconsin has lost most of its luster at this point. First team to 20 wins?

Wyoming is 4-1, but they needed fourth-quarter comebacks to beat Montana State, Northern Illinois, and UConn, who might be the worst team in FBS. We’ll find out a lot more about the Cowboys this weekend as they take on the Falcons, who are a Utah State comeback away from being 5-0. Air Force goes to Boise and then hosts ranked San Diego State after this game, but don’t expect them to caught looking ahead to those two games.

After a season-opening loss at Illinois, Scott Frost’s seat was well on its way to being scalding hot. But the Huskers have actually played some decent football since then, and had they closed the deal at Michigan State, Frost’s seat would be about as cool as it could be. If Nebraska can somehow reach the 20-point mark, which no one has hit thus far against Michigan, then they will have a chance.

Will Jack Coan start for Notre Dame this week in Blacksburg even if he is healthy? Coan had a big game in their season-opening win at Florida State and came up big in a comeback win over Toledo the following week, but his performances have dipped week-to-week. Whether it’s Coan or Drew Pyne, who replaced him at halftime against Cincinnati, expect Virginia Tech to try to make regular contact whoever is taking the snaps. The Hokies have 13 sacks and 27 tackles for loss in four games.

After back-to-back losses to Arkansas and Mississippi State, Texas A&M has gone from College Football Playoff hopeful to out of the top 25. Their hopes were always going to rest on how well they could replace Kellen Mond. Right about now, Jimbo Fisher might be wishing Mond had some extra eligibility.

The 2022 Formula 1 season is only six races deep, but the race for this season’s championship alerady appears to be down to just two drivers. Last season, Red Bull driver Max Verstappen claimed his first Formula 1 World Drivers’ Championship in highly controversial circumstances, with Lewis Hamilton denied what would have been a record-breaking END_OF_DOCUMENT_TOKEN_TO_BE_REPLACED