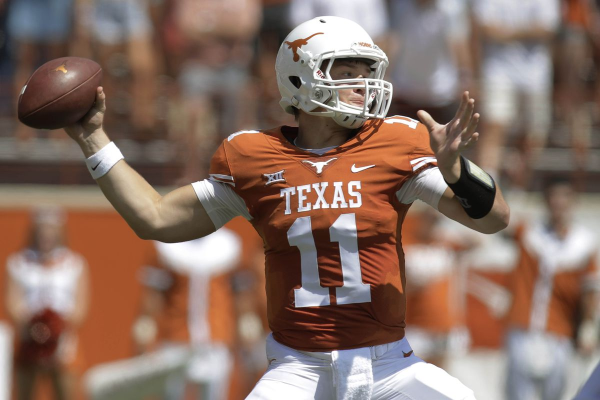 Two teams that are firmly in the race for the Big 12 conference crown are two that are tied at the top. This weekend the #13 West Virginia Mountaineers travel to Texas to take on the #17 Longhorns. There is a three-way tie at the top and two teams are one game back in the standings. Texas might be the most surprising team at the top as the have had a resurgence this season. WVU would be at the top of the chart had they not slipped up to Iowa State a few weeks ago. For two teams battling it out, this is going to be a very good game. Both teams have stellar quarterbacks and are looking to clinch a Big 12 championship game in the future. Texas heads into the game as a two-point favorite.

West Virginia has moved the ball really well this year, gaining 479.1 yards of total offense. They score 39.9 points a game and a lot of that can be attributed to Heisman candidate Will Grier. Grier has thrown for 2,272 yards and 25 touchdowns. He has also thrown seven interceptions on the year. Kennedy McKoy has spurred the ground game for WVU as he has gained 366 yards. David Sills V is the leading receiver for the Mountaineers as he has gained 529 yards and caught nine touchdowns thus far on the year. West Virginia’s defense is pretty good as they have only allowed 19.6 points a game and 349.4 total yards a game. They allow 216.6 yards a game through the air and have been really good at forcing opponents to make mistakes. WVU has just one loss on the season and that came to Iowa State 30-14 when the Mountaineers only scored one offensive touchdown. They since took down Baylor 58-14 in their game two weeks ago. WVU is a team that can really get going and score a lot of points so defenses are going to have to be ready for them.

Texas is a surprise team in a way this year. Last year they struggled a bit but have really turned it around. Most of their success can be attributed to quarterback Sam Ehlinger. He has thrown for 1,817 yards and 13 touchdowns while only throwing two interceptions. Ehlinger can run with the ball as well gaining 377 yards rushing and scoring eight touchdowns so far this season. The leading rusher for the Longhorns is Keaontay Ingram with 455 yards and two touchdowns. The leading receiver for the Longhorns is Lil’Jordan Humphrey with 46 receptions for 645 yards and Collin Johnson with 46 receptions for 628 yards. Between the two they have nine combined touchdowns. The Longhorns are coming off of a loss to Oklahoma State 38-35 and will be coming into this game hungry. The Longhorns do allow 24.9 points a game but they keep the opposing team to under 400 yards of total offense a game. The Longhorns are really going to need to sure up their pass defense if they want a chance to win out and take home the Big 12 championship.

This is going to be a brawl. Both teams are going to come in and give all they have. Whoever ends up winning out will most likely win the Big 12 championship as they will take down Oklahoma. Texas already holds the tiebreaker over Oklahoma as they have beaten them earlier this year. With a win, Texas would need to get past Iowa State to win the Big 12. WVU still needs Oklahoma to lose another game. This is going to be a great game but since it is at home, take Texas to win by a touchdown.