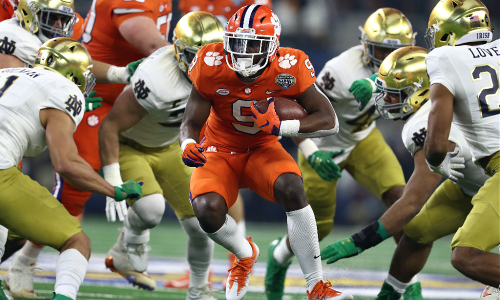 Will this ACC matchup be different compared to the other times we have been disappointed when Clemson faces off against a promising conference opponent? The Clemson Tigers (7-0) vs the Notre Dame Fighting Irish (6-0) this Saturday in Indiana, that kickoffs at 7:30 p.m. EST, features a No.1 and No.4 matchup that is expected to deliver on all ends.

Dabo Swinney and his team barely escaped the grasp of Boston College last week, after coming back from being down 15 points at halftime to remain undefeated, while the Irish have won their last two games by a combined score of 76-16. The biggest story for the Tigers will, of course, be the fact that Heisman hopeful and future number-one pick, Trevor Lawrence, will be sidelined after testing positive for COVID-19 two weeks ago. This will be the fifth matchup between the school programs dating back to 1977 in which Clemson has won three straight games against the Irish. Everyone remembers the last matchup back in 2018 at the Cotton Bowl that saw the Tigers demolish the Irish 30-3 en route to their national championship. In that game, Clemson was ranked second in the country while Notre Dame was ranked third making Saturday the second time both teams are ranked in the top four while playing against each other.

Currently, DraftKings Sportsbook has Clemson (-5.5) as the favorite with a total of 50.5 between both teams. The money line has the Tigers at -278.

Kings of the ACC

In the last four times Clemson has faced another top-ten ACC team, they are a perfect 4-0 with a margin of victory being 18.5 points. Alone in the last four years while facing top ten opponents, even outside of the ACC, their record is 9-2.

It is not unknown that the ACC belongs to the boys in orange and their record of 44-2 against conference opponents in the last six years is proof of that. However, this COVID season has brought upon a matchup that is rather uncommon compared to years past. Notre Dame is a part of a conference for the first time since 2013.

Fans can only hope Saturday’s matchup isn’t a repeat of the 2018 Cotton Bowl, but the history of Clemson’s success points all fingers towards a similar result. The Irish have won 29 of their last 32 games and are winners of 12 straight…Brian Kelly seems confident in his team’s ability to change the narrative, but only game time will tell.

The Irish and their defense have thwarted opponents in their first six ACC games. Notre Dame allows only 10.6 points per game, which ranks fourth-best nationally, and 267.2 yards per game which is sixth-best.

The best offense the Irish have faced thus far has been Louisville, who scored 33.2 points against their other opponents, but against Notre Dame, they scored only seven points and barely surpassed 200 yards of total offense.

Defensive Coordinator Clark Lea has done a fantastic job in the last two years building one of the best overall units in the entire country. However, he will be going up against the No. 2 scoring offense in the FBS. The Tigers average 46.1 ppg and are 32-37 in red-zone attempts this year. The Irish will have their hands full, but have proven this season they can handle any test that is thrown their way.

By the Book against Big 5inco

It will be senior Irish quarterback Ian Book against Clemson’s freshman stud D.J. Uiagalelei. Book has played in 41 collegiate games with over 7,000 career passing yards. Uiagalelei only has one start against Boston College last week, where he racked up 342 yards passing and three total touchdowns.

Uiagalelei has a 6-foot-4, 250-pound frame that allows him to run with the momentum of a defensive end while also showing he can succeed as a pocket passer if given the time. Book does have some dual-threat ability with his five rushing touchdowns on the year, but the athleticism advantage goes to D.J.

Everybody wanted Book vs Trevor Lawrence, but this matchup will be interesting enough on its own. The Tigers proved to be just fine without their primary QB, and the fact Uiagalelei didn’t crumble under the pressure of being down against Boston College, gives a plethora of confidence to Dabo and his offensive staff.

The safe bet would be to go off the history between these two teams. Dabo has established one of the most consistent programs in the history of college football, while Notre Dame has a history of under-producing in their big moments.

The Tigers are still 5.5 favorites without Trevor Lawrence, and that speaks to the ability of the rest of the team to win this highly-anticipated game. Therefore, I have to take Uiagalelei and the Tigers prevailing over the Irish to remain undefeated.

After extending their hot and San Diego’s cold streak, the Seattle Mariners will be looking to leave Petco Park with a two-game sweep as they take on the Padres this afternoon. Yesterday, the Mariners pounded out a dozen hits and plated eight runs, and Chris Flexen pitched 6.2 shutout innings to collect his third straight END_OF_DOCUMENT_TOKEN_TO_BE_REPLACED