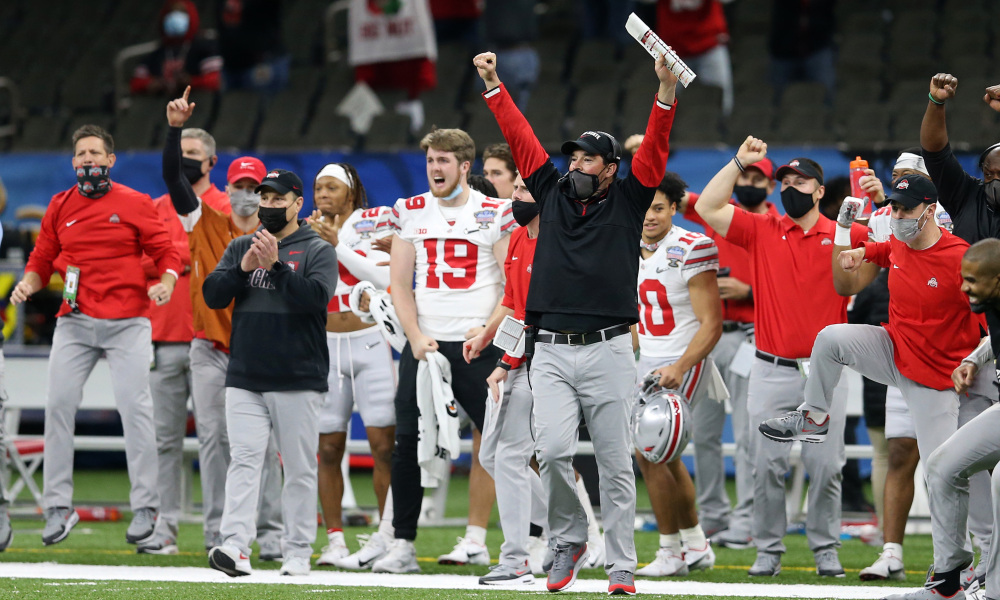 Two of college football’s most storied names will face off for the College Football Playoff National Championship on January 11. One of the semifinals went as expected, while the other one did not. No. 1 Alabama has steamrolled most of their competition this season, and No. 4 Notre Dame was their latest victim in the Rose Bowl, with the Crimson Tide strolling to a 31-14 win that was never in doubt. No. 3 Ohio State faced a lot of detractors due to only playing six games this season, but those questions were put to rest as they blasted No. 2 Clemson 49-28 in the Sugar Bowl to atone for last year’s semifinal loss.

Some might be disappointed to not see Alabama and Clemson face off for a national championship for the fourth time in six seasons, as the Tigers were strong favorites to return to the title game after routing Notre Dame to win the ACC title. However, there is sure to be a ton of college football betting action on the matchup between the Crimson Tide and the Buckeyes. The two teams have not met since the 2015 Sugar Bowl, when #4 Ohio State overturned an early 21-6 deficit to stun top-ranked Alabama before walloping Oregon to win the first-ever CFP national title.

In fact, the action has already begun, as lines were released while fans were still trying to process Justin Fields and Ohio State’s domination of Clemson, which did not seem a likely outcome after Trevor Lawrence and the Tigers scored touchdowns on two of their first three drives to lead 14-7.

There has already been some movement in those lines, and with the game still a week away, there is likely to be more movement between now and kickoff.

Is A High-Scoring Rout in the Cards?

The movement in the total is interesting to note. Alabama is second in the FBS in scoring at 48.2 points per game, while Ohio State is tied for fifth at 43.4 points per game. Alabama’s 31 points against Notre Dame was their lowest total of the season, and it ended a streak in which they had scored at least 41 points in ten straight games and over 50 points in three straight. As for Ohio State, their 49 points against Clemson was the fifth time in their seven games this season that they have scored at least 42 points.

That would seem to indicate that there will be a lot of scoring when these two high-powered offenses meet. However, only one of the previous six CFP championship games has seen the total breach the 70-point plateau which was Alabama’s 45-40 win over Clemson five years ago. That said, the winning team has scored at least 42 points four times – Clemson scored 35 to beat Alabama in the final seconds in 2017 and Alabama scored 26 in their overtime win against Georgia the following year – to those backing one side or the other might be wise to keep an eye on the team totals.

After tight scores in 2016 (Alabama 45, Clemson 40), 2017 (Clemson 35, Alabama 31), and 2018 (Alabama 26, Georgia 23), the last two championship games have not been close, with Clemson throttling Alabama 44-16 two years ago and LSU routing Clemson 42-25 to take home the title last season. Alabama’s six-point SEC Championship win over Florida was their closest win this season, with all other wins coming by at least 15 points.

One historic trend that favors Ohio State is the fact that only one No. 1 team has won the title in the College Football Playoff era, which was last season when Joe Burrow and LSU won in a tangle between Tigers. The previous three seasons that Alabama was No. 1 entering the CFP, they failed to win the title: 2014 (lost to No. 4 Ohio State in the semifinals), 2016 (lost to No. 2 Clemson in the championship game), and 2018 (lost to No. 2 Clemson in the championship game). On the other hand, the No. 3 team has never won the CFP title, so that is a trend that the Buckeyes would have to overturn to take the trophy.