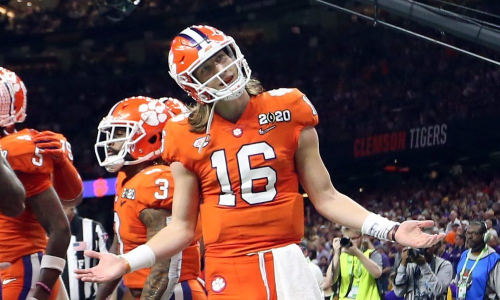 Conference championship weekend across the FBS promised to be an exciting one, and it delivered. There were upsets (much to the chagrin of the Pac-12, thanks to Oregon knocking off undefeated USC) and there were thrillers, led by the SEC Championship Game shootout between Alabama and Florida.

But in the SEC title game, and in the other conference title games that were key to deciding how the final College Football Playoff rankings would play out on Sunday, the favorites all prevailed. Alabama raced out to a big lead over Florida but then had to hold on in a wild fourth quarter in a 52-46 win. The top-ranked Crimson Tide secured their sixth appearance in the College Football Playoff and return to college football‘s final four after missing out for the first time in the CFP era last season.

In the ACC, Clemson throttled Notre Dame 34-10 to secure their spot in the CFP. The Tigers needed to win to not have to sweat it out until Sunday, and they were dominant on both sides of the ball in avenging their November loss to the Fighting Irish and locking up a sixth straight CFP appearance. While the Irish were unable to wrap up their year in the ACC with a title, they still get the consolation of being in the CFP for the second time and first time since the 2018 season.

In the other key showdown, Ohio State was in trouble against Northwestern in the first three-quarters of the Big Ten title game. The Buckeyes trailed 10-6 at halftime, and Justin Fields had arguably the worst game of his collegiate career, going 12 of 27 for 114 yards and two interceptions. But thanks to a 331-yard performance by running back Trey Sermon, the Buckeyes turned things around and prevailed 22-10 to guarantee that there would be no drama for them either.

When the final rankings were released on Sunday, Alabama remained in the top spot, with Clemson moving to second, Ohio State to third, and Notre Dame dropping from second to fourth, with the Irish finishing ahead of fellow one-loss team Texas A&M for the final spot in the CFP. That means that Alabama will face Notre Dame in the Rose Bowl on New Year’s Day, with the two teams facing off for the first time since the Tide trounced the Irish 42-14 to win the BCS title in the 2012 season.

In the other matchup, Clemson will take on Ohio State in the Sugar Bowl on New Year’s Day. This will be the third time the two programs have faced off in the CFP. Their most recent meeting was just last season when the Tigers scored a late touchdown to beat the Buckeyes 29-23 in the Fiesta Bowl and book a place in the title game against eventual champions LSU.

As has been the case over the last several weeks, Alabama is a strong favorite to win the national championship. Here’s a look at the latest odds.

The gulf between Alabama and Notre Dame’s odds to win the national title is reflected in the fact that the Crimson Tide are favored by a whopping 19.5 points for their Rose Bowl showdown. No other team has been favored by as much in a CFP game. The Tide held the previous record as well, as they were favored by over two touchdowns for their CFP semifinal against Oklahoma two seasons ago. They did not cover in that game, beating Oklahoma 45-34 in the Orange Bowl.

In the other semifinal matchup, Clemson is favored by 7.5 points over Ohio State. Clemson has been dominant when Trevor Lawrence has suited up, winning all but one of his starts by at least 24 points. Ohio State had been very impressive for the most part in their five wins, but the manner of their struggle against Northwestern compared to Clemson’s destruction of Notre Dame could perhaps be a factor in why the Tigers are favored by more than a touchdown.

Both matchups are expected to see no shortage of scoring. The latest total listed for the Rose Bowl is 65.5, as is the latest total for the Sugar Bowl. Alabama is second in the FBS in the points per game, while Clemson ranks fourth, Ohio State seventh, and Notre Dame 21st.

If the two favorites do come out on top in the semifinal showdowns, Alabama and Clemson will face off for the fourth time in a College Football Playoff championship game and the fifth time overall in the CFP. The two teams have split the first four matchups, with Clemson holding a 2-1 edge in championship game meetings.

The Tide won the first title game matchup in 2016 and won the Sugar Bowl semifinal game in 2018, while the Tigers won the 2017 championship game in a last-second thriller and walloped Alabama 44-16 to win the title again two years later. It is worth noting that the #1 team has come out on the losing side in all four of those meetings. If Alabama does win their first national championship since the 2017 season, they will be only the second #1 team to win the CFP title, following LSU’s win last season.