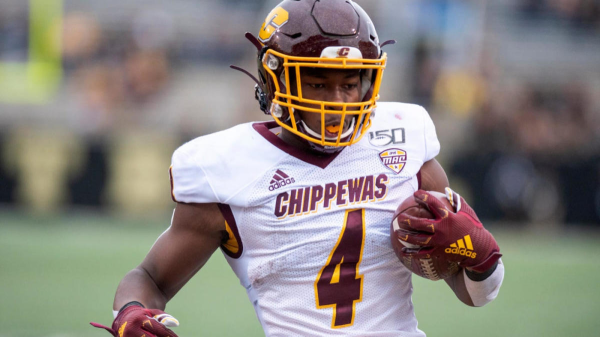 This week the MAC conference returns for another season of “MACtion” as the Ohio Bobcats take on the Central Michigan Chippewas on Wednesday night.

Ohio enters the year coming off a 7-6, 5-3 record in 2019 that saw that Bobcats end their season with a win in the Famous Idaho Potato Bowl. Just a season ago, the Bobcats ranked 20th in the country in points per game with a 34.3 average. Defensively they allowed 26.5 PPG, but during their 3 game win streak to end the season last year, they were giving up just 16 points a game. Ohio ranked 20th in the country in rush yards per game, as they actually averaged more rushing yards per game than passing yards. Freshman O’Shaan Allison lead the Bobcats with 869 total rushing yards and averaged just over 72 a game.

Central Michigan also enters the year after a successful 2019 campaign. Though the Chippewas were picked to finish dead last in the MAC, CMU went 8-6, 6-2 and made it to the MAC championship before falling to Miami (OH) 26-21. The Chippewas scored 30.4 PPG and allowed 28.3 PPG, but they did have an average margin of victory of 24 points in MAC games. Central Michigan was middle of the pack in terms of their offensive output last season as they ranked 42nd in the country in rushing offense and 48th in passing offense. The biggest challenge for CMU will be replacing RB Jonathan Ward who rushed for over 1100 yards and 15 Touchdowns, and ranked 34th in the country in rushing yards just a season ago.

Ohio U ranked 77th vs the run last season. Teams averaged 166 yards on the ground per game, and they gave up at least 100 yards in all but 3 games. The Bobcats ranked 83rd in terms of passing defense last season as teams continued to rip up their secondary all year. They had 4 games where opposing QBs threw for at least 321 yards, and they gave up 21 passing touchdowns. Overall the Bobcats ranked 76th in total defense as they conceded just over 400 yards per game. This has to be an area of concern for head coach Frank Solich as they enter the new season.

CMU ranked 41st in total defense surrendering 363 yards per game in the 2019 season. They were the 24th best rush defense averaging 122 rushing yards per game allowed, but got killed through the air as they ranked 89th in FBS. CMU gave up 25 passing touchdowns last year, and had 5 games were they allowed 3 or more. This team really struggled vs the pass last season, and it was what killed them in their New Mexico Bowl loss to San Diego State. In that game, the Chippewas allowed 287 passing yards and 3 touchdowns to SDSU QB Ryan Agnew, who had only thrown for 3 touchdowns one other time that season.

Both of these teams were picked to finish third in their respective division. Ohio will look to continue the rushing success O’Shaan Allison had last year, along with replacing QB Nathan Rourke. Other than Allison, the Bobcats return Isaiah Cox (39 receptions, 663 yards, 2 touchdowns) and Shane Hooks (26 catches for 515 yards and 5 touchdowns). Central Michigan is turning to Redshirt Freshman QB Daniel Richardson for this game. Richardson appeared in just one game last season, but Head Coach Jim McElwain appears to believe Richardson is ready to take the next step. The Chippewas will rely on Kobe Lewis (182 carries, 1074 yards, and 12 touchdowns) to carry the bulk of the load on offense after the loss of Jonathan Ward. Look for WRs Kalil Pimpleton (82 catches, 894 yards, 6 touchdowns) and JaCorey Sullivan (57 catches, 808 yards, 3 touchdowns) to build off a successful 2019 campaigns as well.

DraftKings is currently listing Ohio (-1.5) as the favorite, with the total set at 59.5. I would imagine this comes down to Vegas not trusting new CMU QB Daniel Richardson enough. The Chippewas definitely have more talent, but Richardson has only thrown 3 passes in his collegiate career.

Here’s what we do know: these two defenses weren’t good last year, and that’s not changing. Pimpleton and Sullivan should put up big receiving numbers, and look for Allison to have a strong game for the Bobcats.