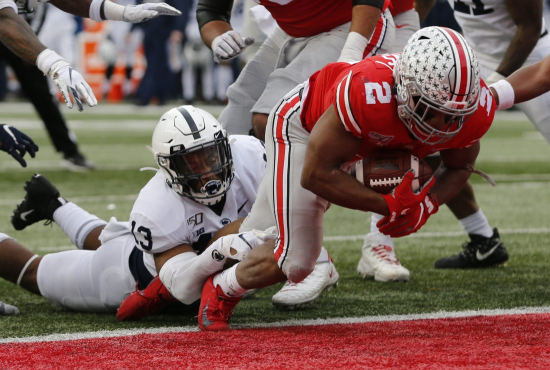 Saturday features a Big Ten East showdown as the No. 1 Ohio State Buckeyes (11-0) travel to Michigan Stadium to take on the No. 13 Michigan Wolverines (9-2). While this matchup will not affect the conference (Ohio State is 8-0, while Michigan is 6-2), it has huge ramifications for the postseason as Ohio State looks to secure a top spot in the College Football Playoff. Kickoff for this one is scheduled for noon ET.

The Buckeyes have been rolling for most of the season but did have a bit of a scare last week against a tough Penn State team. In that matchup, the Buckeyes took a 14-0 lead into halftime but allowed the Nittany Lions to roll off 17 points in the third quarter. Against a Michigan team that has been equally hot as of late, Ohio State has to play a full four quarters if it wants to secure this victory.

For the Wolverines, since losing to Penn State about five weeks ago, they have rolled off four in a row and have been impressive in all of them. In that time, they beat No. 15 Notre Dame by 31 points, Maryland by 31 points, Michigan State by 34 and Indiana by 25. Their team certainly seems to be clicking, and they will need a good showing to knock off Ohio State.

The Buckeyes come into this one as nine-point favorites despite playing on the road. The over/under for total points scored currently sits at 49.5.

Ohio State has been absolutely sensational this season, as it has playmakers all over the field for its dynamic, high-scoring offense. Under center is Justin Fields, who has thrown for 2,352 yards with 33 touchdowns and just one interception.

Fields’ go-to receiver has been K.J. Hill, who has 42 receptions for 469 yards and seven touchdowns. Chris Olave currently leads the Buckeyes with 637 yards receiving and 10 touchdowns.

While the passing game is solid, Ohio State’s rushing attack may be even better. J.K. Dobbins has gone off for 1,446 yards and 15 touchdowns thus far this season. Even the backup running back, Master Teague III, has rushed for 751 yards and four touchdowns.

For one of the biggest rivalries in college football, there would be nothing better for Michigan than to upset its conference rival and knock them out of the top spot in the country in the last game of the regular season. To do so, the Wolverines will need to keep up with the Buckeyes offensively, and for that, they will look to quarterback Shea Patterson. On the season, Patterson has thrown for 2,523 yards, 21 touchdowns and five interceptions.

Michigan’s two biggest receiving threats have been Ronnie Bell and Nico Collins. Bell has 38 receptions for 627 yards and a touchdown, while Collins has 31 catches for 649 yards and seven touchdowns. On the ground, it has been Zach Charbonnet leading the way with 635 yards and 11 touchdowns.

Buckeyes Hard To Bet Against

It seems like we have been down this road before. Both of these are top-25 teams with a lot at stake. Last year, it was a similar situation where Michigan had been rolling going into the matchup only to be beaten 62-39 by the Buckeyes. Even though its play was a little concerning last week, I think Ohio State has a lot more to get up for this week and will put a hurting on the host Wolverines.

I wouldn’t blame you if you took Michigan and the points, but I just think that Ohio State has too much firepower (really on both sides of the ball) for Michigan to keep up with. For my money, I am taking Ohio State despite laying the nine points.