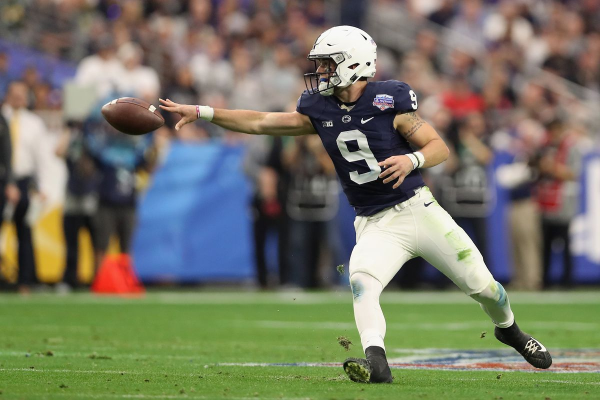 A huge Big Ten match up will take place on Saturday at 3:30 as the Michigan State Spartans travel to take on the Penn State Nittany Lions. Michigan State has struggled so far this year and Penn State has had just one hiccup on the way to a 4-1 record and a #9 ranking in the nation. Both of these teams need a win, but no Big Ten team needs a win more than the Spartans as they are off to a very rocky start and still need to win a few games to keep their bowl hopes alive. With the performance of MichiganState so far, a bowl game isn’t guaranteed. Penn State is favored in this game by 13.5 points.

Michigan State has really struggled this year as they sit at 3-2. They barely escaped in the season opener as they narrowly defeated Utah State 38-31 at home. The Spartans then lost the second game of the year to Arizona State, 16-13 and then took down Indiana and Central Michigan by double digits.

Last week, Michigan State fell to Northwestern as they could not get any offense going. Michigan State is only putting up 27.2 points a game while they allow 23.4 points a game. They are really going to need to increase their offensive production if they wish to beat the Nittany Lions and other teams on their schedule. Michigan State only gains 389 yards a game which is partly due to the inconsistent quarterback play that they have gotten.

Quarterback BrandonLewerke has thrown six touchdowns but has also thrown six interceptions. Lewerke has thrown for 1,328 yards on 111-of-173 passing. The leading receiver for the Spartans is Felton Davis III who has 23 receptions for 374 yards and has added in two touchdowns. The running game has been decent this year as they gain 123 yards a game with Connor Heyward leading the charge with 147 yards and three touchdowns.

Penn State is in a good spot this year as they sit at 4-1 and ranked 8thin the nation. The Nittany Lions have rolled through three of their first five games. Penn State barely escaped Appalachian State in the first game of the year as they won in overtime 38-31. In Penn State’s last game, they fell to #4 Ohio State by one point at home. They have been an offensive juggernaut this year gaining 510 yards a game.

They throw the ball for an average of 248.8 yards a game and run the ball for 261 yards a game. Quarterback Trace McSorley has firmly planted himself into the conversation for the Heisman trophy with his performance thus far this year. McSorley has thrown the ball for 1,049 yards and 10 touchdowns while only throwing two interceptions. McSorley really makes opposing teams flustered with his legs as he has run for 410 yards on just 66 carries.

McSorley has ran for six touchdowns as well on the season. Running back Miles Sanders has run the ball for 538 yards and six touchdowns on 87 carries to lead the team in rushing.

Coming off of a bye week, Penn State has a huge advantage over Michigan State.  The Nittany Lions are going to come out in this one looking to prove to the playoff committee that their tough loss to Ohio State wasn’t a fluke and that they deserve a spot in the college football playoff if they win out. MichiganState is using this game to keep their head afloat because if they don’t win, they may not get to a bowl game because they only have two surefire wins left on their schedule. Take Penn State to cover and get the win.