Betting on the SEC: Florida at Georgia Pick and Prediction 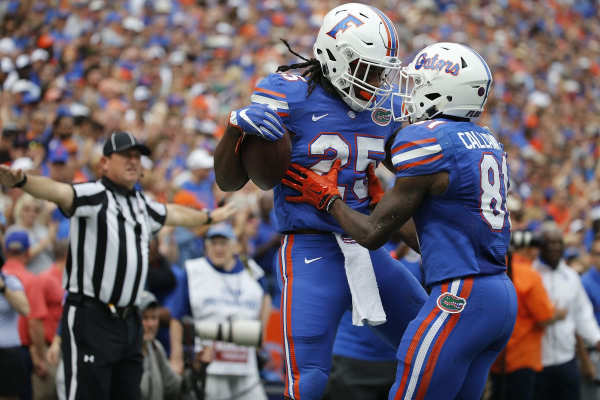 A huge SEC matchup takes place on Saturday, one that could have huge playoff implications. The eighth-ranked Florida Gators go into Georgia to take on the seventh-ranked Bulldogs. Both Georgia and Florida sit at the top of the SEC East standings tied with who else but Kentucky. Both teams sit at 6-1 and have 4-1 records in the conference but the way that they got there is much different.

Florida dropped their opening SEC game to Kentucky by a score of 27-16. After that, the Gators have really just cruised through the schedule. With a win, Florida would be the favorite to win the SEC East due to an easy schedule after the game.

Georgia dropped a contest to LSU last week 36-16 and still have Kentucky to play on their schedule. The road is much tougher for Georgia, but the road to the SEC Championship is there. Georgia is favored this week by seven points at home.

Florida has been exceeding expectations this year after a coaching change. They are exceeding them so much that they are in a really good position to get to the SEC Championship. A loss would all but eliminate them though as Kentucky isn’t looking like they will drop two more games this year and if both Georgia and Kentucky lost a game, they both would hold the tiebreaker over Florida.

Florida has been solid on both sides of the ball this year and their scoring offense and defense reflect that. Florida has put up 34.4 points a game and they only allow 16.6 points a game. They are moving the ball pretty well on offense gaining 211.0 through the air and 197.3 on the ground a game. Their defense has been solid as well giving up only 323.3 yards a game. They are very good against the pass only giving up 160.1 yards through the air.

They held #23 Mississippi State to just six points and most of their points this year given up have come in garbage time. After this game, Florida plays Missouri, South Carolina, and Idaho at home followed by the last game of the regular season against Florida State on the road.

Georgia is coming off of a bye week after falling to thirteenth ranked LSU 36-16. Georgia needed that break to sure up the things that they have struggled with and should welcome in Florida firing on all cylinders. Georgia has been just a bit better at everything this year than Florida.

They have scored 39.0 points a game and are allowing 16.3 points a game. Georgia is moving the ball really well, but they are also very balanced. They gain 235.6 yards through the air and 226.3 yards on the ground. On defense, they are solid stopping the run by allowing 136.3 yards on the ground and 174.3 yards through the air. Georgia is going to need this output this weekend to take down the ninth-ranked Gators.

This is always one of the best SECEast matchups of the year and this year is going to be no different. Both of these teams still have a lot to play for and are looking to be the ones who get to the SEC Championship and knock off Alabama. They are both going to come out and attempt to establish the tempo early on by running the ball and controlling the line of scrimmage. Whoever does this, will have the definite upper hand in the game. Georgia is coming off a bye week, but Florida is clicking right now. Look for Florida to come in and beat the -7 spread this week.