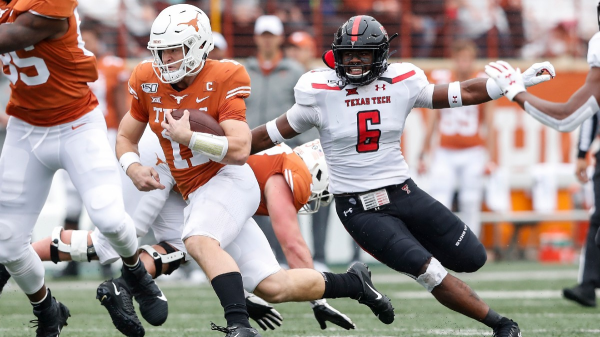 College football is going to be a little different this year with football teams playing an expedited, conference-only schedule. The Texas Longhorns and the Texas Tech Red Raiders each have a win on the year, even as some conferences haven’t yet played a down. Currently, the Longhorns are ranked 8th in the nation and could be a contender for the playoff. The Red Raiders are currently unranked but are looking for their fortunes to change. The Longhorns have won two of of the past three meetings between the two teams

The Longhorns top-10 ranking is due to some serious talent on offense. At quarterback, Sam Ehlinger leads Texas’ vaunting passing attack. He threw for 5 touchdown and 426 yards last week against UTEP. It was mostly a warm up game for the heavily favored Longhorns, but Ehlinger really set a positive tone to begin the season. He is a fifth year senior and has plenty of experience, and should be comfortable in the pocket against the Red Raider defense.

Against UTEP, Ehlinger sprayed the ball all over the field, with 7 different receivers averaging of 10+ yards per catch, and 7 different receivers scoring touchdowns. Joshua Moore led with 6 receptions, 127 yards and a touchdown, and finished with almost 40 yards more than any other receiver. He should be a matchup nightmare for the Red Raiders.

On the ground, the Longhorns used a whole committee of running backs against UTEP. The leading back, Keaontay Ingram, rushed for 44 yards on 9 attempts. It’s definitely a pass-first offense with Ehlinger at the helm.

The Red Raiders better be ready to score. They are going to need to put up big offensive numbers in order to stay competitive in this game. At quarterback, Alan Bowman showed a lot of poise last week against Houston Baptist. He threw for 430 yards and 2 touchdowns, though the Tech barely squeaked out a win. No receiver gained more than a hundred yards, but Bowman was able to spread the ball around and keep the defense guessing.

Bowman has enough weapons around him to pick and choose where the ball is going. The Red Raiders seem to have a more balanced offense than Texas, and like to put the ball in the hands of running back SaRodorick Thompson. He ran for 118 yards on 22 attempts and scored 2 touchdowns last week. If Thompson can find space and keep the chains moving, the Red Raiders will be able to set the tempo on offense, and hopefully keep Ehlinger and co. off the field.

The Longhorns only allowed 3 points last week, with a defense that stifled UTEP. Look for the Longhorns defense to be a little more involved as the Red Raiders have a more stronger offense than they faced last week. Joseph Ossai led the team with 8 tackles and should have an impact this Saturday. It’s a different story for the Red Raiders, who allowed 33 points to Houston Baptist. The Red Raiders defense struggled and it almost led to a 4th quarter comeback by Houston Baptist. Hopefully they’re more prepared for the Longhorns, or this game could turn sour very quickly. Look for Krishon Merriweather to have an impact. He recorded 12 tackles last week.

Texas Longhorn’s quarterback Sam Ehlinger is ranked #5 at +1100 in the running for the Heisman trophy. He threw for 5 touchdowns last game and will look to pile on more stats against the Red Raiders. The Texas Longhorns are ranked #8, +3300, to win the NCAA championship game. It’s a difficult journey, with tough opponents like Oklahoma (3) and Oklahoma St. (15) coming up.

DraftKings betting odds place the moneyline at Texas -1000 and Texas Tech +600, the Over/Under at 70, and point spread at Texas -18.5. Though both offenses are strong, I like the under here, in a Longhorns blowout where they cover the spread. Look for something around 45-20, with Texas continuing their strong start to the season.