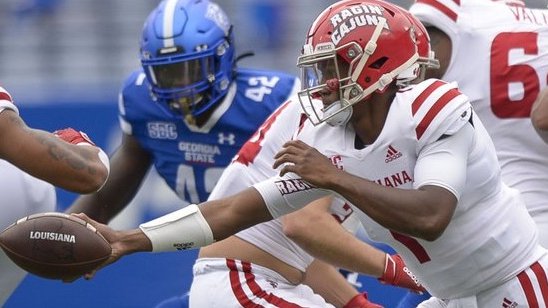 Coastal Carolina definitely looks like the best team in the Sun Belt and one of the best non-Power 5 programs in college football. But the two teams matching up tonight in Lafayette are going to have a say in the Sun Belt title race.

Both teams are 4-1 with their only losses to Power 5 programs. It says a lot that App State is favored even though they are on the road.

Louisiana won by just three points last season, breaking a long stretch of wins by the Mountaineers. A little revenge is never a bad thing.

The only blemish for App State this season is a two-point loss at Miami. Unfortunately for the Mountaineers that is not a great Hurricanes team this season, or even a good one.

Nevertheless they have looked solid, especially quarterback Chase Brice, who is having some success, finally. He is not the running threat of some recent App State quarterbacks, but the Mountaineers are still nice and balanced on offense. RB Camerun Peoples is a bruiser who has scored in every game he has played in this season. He and shifty Nate Noel form a very effective duo, though Noel is on the injury list for tonight.

App State is only giving up 20 points per game to its opponents and only Miami and Marshall have scored more than that. Last year they gave up just 24 points in the loss to Louisiana, and both teams love to run the ball and control the clock. This year they have been pretty stingy against the run, coming in 35th in the nation in that category. So they may be able to make the Cajuns one dimensional, which is the goal.

Cajuns Have Been Quiet After High Preseason Expectations

The Cajuns had a chance to make a statement when they faced Texas to start the season. Unfortunately, they fell flat in that loss and pretty much have been ever since even though they have won their other four games. They have covered just once in that span as this very experienced team just hasn’t come together the way they did a year ago. The offense is not popping the way it did a season ago and there doesn’t seem to be any great reason for what we are seeing other than each season is an island unto itself I guess.

Louisiana’s defensive number are a mixed bag. They are not giving up many points, sitting at 22 points allowed per game, but they have been giving up a lot of yards to their opponents. They have just two takeaways on the season so they are finding ways to stop opponents before they score. App State is definitely the best team they have faced since losing to the Longhorns, as Sun Belt wins over Georgia Southern and South Alabama have not been impressive.

Even though the Cajuns have not been as good as expected this season I was very surprised that they were home underdogs, especially in this midweek showdown against another Sun Belt team. There should be nothing sleepy about tonight’s game as both teams look to prove they are the second-best team in the conference. I still like Cajuns coach Billy Napier a lot and expect he will coax their best game of the season so far. They likely win outright and the value with that hook is great.

Two of the expected contenders in the National League open a three-game series on Monday evening as the New York Mets visit the San Francisco Giants. In the opener, David Peterson will get the start on the mound for the Mets, while Alex Cobb will get the ball for the Giants. While the Mets continue END_OF_DOCUMENT_TOKEN_TO_BE_REPLACED