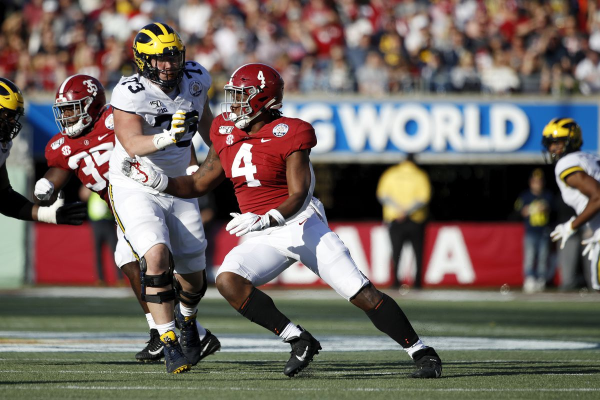 The #2 ranked Alabama Crimson Tide travel to Columbia, Missouri to kick off their season against the Missouri Tigers, with a game time of 6PM CT/7PM ET. The entire SEC kicks off its much anticipated 10 game season on Saturday, September 26th, 2020, with seven games on the schedule.

As in most years, Alabama, led by head coach Nick Saban, starts the year off as a favorite to win the SEC. They are also listed as having a 48% change of making the National Championship game, according to ESPN’s FPI (Football Power Index). Alabama has 12 starters returning to the team from 2019 – 7 on offense and 5 on defense. The Crimson Tide come into the season with the 3rd best ranked recruiting class for the 2020 college football season, an overall A class grade by ESPN. Looking to bounce back from a “down year” at 11-2 in 2019, expect Alabama to start the season with a statement win over Missouri. Alabama will be on a revenge tour this season after losing to LSU and Auburn last year, as they have something to prove to themselves and all of college football.

The Missouri Tigers finished 2019 struggling to win a game. The Tigers lost 5 of their last 6 games and their final record was 6-6. Mizzou enters the 2020 season with the 53rd ranked recruiting class, an overall C class grad by ESPN. They look to have a bounce back season with new head coach Eli Drinkwitz at the helm. Eli Drinkwitz will be coaching his first year in the SEC, after a successful 12-1 2019 season with Appalachian State.

The Tigers will be looking to establish their identity on the field. Unfortunately for them, their first game comes against the power house that is Alabama. Don’t expect the Tigers to be able to keep pace with the Crimson Tide this week. The Tigers are returning some key players on the offensive side of the ball, and a handful on defense. However, with head coaching change normally brings scheme changes to one or both sides of the ball. It is a rough time to overhaul a team’s offensive or defensive system at the moment, without the chance to have on-field practice reps to learn from.

This was a very unique college football offseason with the COVID-19 outbreak hampering full padded training camps, and just about any and all in-person interactions. The teams with little to no change will have the upper-hand on teams that made coaching changes, or lost the most amount of players due to eligibility, graduation, or the NFL draft.

With Alabama returning 12 starters and the consistency of head coach Nick Saban having his teams prepared for gamedays, expect Alabama to come out of the gates firing on all cylinders. The Crimson Tide were the 3rd highest scoring team in the nation last season with 45.7 points per game, while the Tigers 96th at 23.1 points per game. These two teams are on different tiers in the college football landscape. The SEC schedule has been trimmed from its usual 12 games to 10, which means every game this year is even more important than ever.

Expect Alabama to stick to their ways of ground and pound on the offensive side of the ball, setting up the play action pass, and playing their stifling usual defense, which only allowed 325 yards per game last season. The Tigers defense allowed 314 yards per game, and an impressive 19 points per game, but faltered down the stretch of their season. The coaching change will be a positive for the Tigers. It may not show in this game, but it will this season and in the future.

Picks: Alabama on the moneyline -4500 and the point spread of -27.5, a parlay play if you’re looking to maximize your bet on the Crimson Tide. Stay away from the over/under of 55.5, as I’m not sure what the Tigers offense will be able to muster against Alabama, and it’s possible the Crimson Tide go up big, and try to simply run the ball.