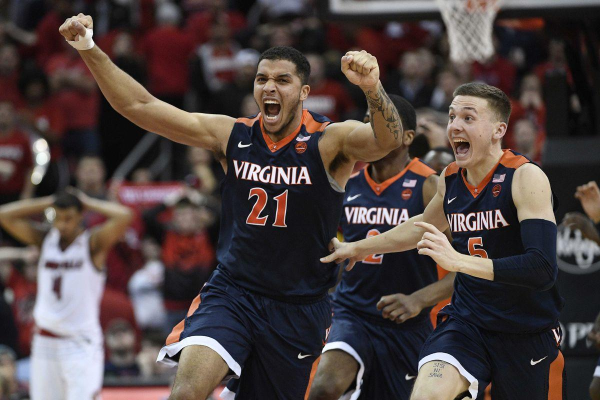 Tuesday will be an ACC showdown and matchup of top-10 teams as the number 9 Virginia Tech Hokies (14-1, 3-0 in conference) travel to John Paul Jones Arena to take on the number 4 Virginia Cavaliers (15-0, 3-0 in conference).  For Virginia Tech, they have won 9 in a row since their 63-62 loss to Penn State back on November 27th.  Despite the impressive record, this will be Virginia Tech’s biggest test, as they have no wins against current top-25 teams.  For Virginia, they have coasted this year, winning all but 3 of their games by double-digit points, including their most recent victory, a 63-43 victory over Clemson, on Saturday.  They have notable wins over number 11 Floria State (65-52) and number 19 Maryland (76-71). The two will square off Tuesday with tipoff set for 8:00 pm ET.

In this contest, the Virginia Cavaliers come in as 8.5-point favorites playing at home.  The over/under for total points scored is set at 122.

On the defensive end, both of these teams have statistically been dominant this season.  Virginia Tech ranks 4th in the nation in points allowed, averaging 57.3. Not to be outdone, Virginia ranks 1st in the nation, only allowing an average of 51.2 points.  Not only does Virginia allow the fewest points, they hold opponents to one of the lowest field goal percentages in the nation as well.  The Cavaliers rank 3rd in the nation, allowing opponents to only shoot 36.6% from the field.  Virginia Tech comes in at 26th, allowing opponents to shoot just 39.5. The Hokies actually come out ahead on turnover margin as they have a ratio of 4.8 (good for 9th in the country) while Virginia comes in at 24th with a margin of 3.9. Needless to say, both of these defenses are about as good as it gets.

Virginia Tech has been dominant this year, but without a signature win over a ranked opponent they may not fully get the credit that they deserve.  A win over Virginia would dismiss a lot of the naysayers.

Virginia is looking to take sole possession of first place in the ACC, especially before a matchup with Duke this weekend.

To beat Virginia Tech, the Cavaliers will continue to lean on junior guard Kyle Guy.  On the season he is averaging 15.3 points, 4.3 rebounds and 2.2 assists per game. He is also shooting 46.7% from the field and 46% from behind the arc.  Aside from Guy, they have two others averaging double-digits.  De’Andre Hunter is averaging 14 points, 5.3 rebounds, 2.1 assists and is shooting 51.1% from the field.  Ty Jerome is the other one, averaging 13.1 points, 4.1 rebounds, 4.4 assists and 1.8 steals per game.

Virginia May Win, But I like The Hokies To Cover

This one is tough to call, most notably because Virginia Tech has not been tested 15 games into the season.  They certainly will be tested Tuesday, though.  The Cavaliers are not just an in-your-face defense, but they have talent on both sides of the ball.  I do think that there is a good chance that Virginia wins this game outright, but 8.5 points is a lot to spot a team that has been as good as Virginia Tech on both sides of the floor.  Their defense has been stellar and they have the potential to beat you from behind the arc (they are 3rd in the nation shooting 42.3% from three).  I don’t expect them to shoot that well against Virginia’s defense, but if they can shoot anywhere close to that I see them covering.  For my money, I am taking Virginia Tech and the 8.5 points.