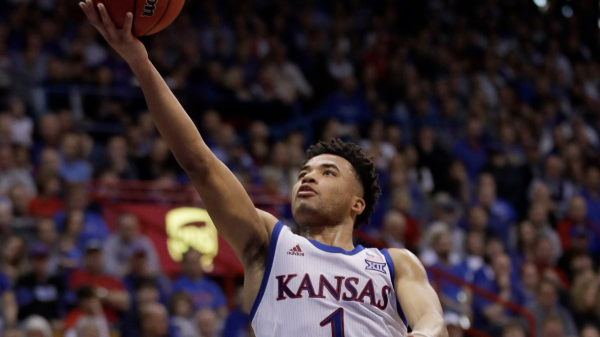 Monday night features a Big 12 matchup as the Texas Longhorns (14-7) travel to Allen Fieldhouse to take on the No. 3 Kansas Jayhawks (18-3). Currently, Texas sits tied for fourth in the conference at 4-4 and would love to pick up a signature win over Kansas.

For the Jayhawks, every conference win is crucial as they hope to keep pace with Baylor, which sits atop the conference standings at 8-0. Tipoff for this one is scheduled for 9 pm ET.

It has been a bit of an inconsistent season for Texas. The Longhorns come into this one having won two in a row, but prior to that, they had a three-game losing streak, including a home loss to the Jayhawks. After losing by eight to Kansas just a few weeks ago, they are hoping to repay the favor on the Jayhawks’ home floor on Monday.

Kansas comes into this one having won six in a row, including a 78-75 win over Texas Tech on Saturday. The Jayhawks’ last loss was to No. 1 Baylor, the team they are now a game behind of in the conference standings.

Still, Kansas has shown the ability to overwhelm teams recently, and its only three losses have been to ranked teams (Baylor, Villanova and Duke). The Jayhawks will look to push their winning streak to seven on Monday against the Longhorns.

The Jayhawks come into this one as 15-point favorites playing at home. The over/under is set at 129.5

While Texas has a decent record at 14-7, it lacks a signature win. Beating No. 3 Kansas could certainly be the win it needs. Still, the Longhorns are going to have to find offense, as they are not a high-scoring team; rather, they rely on their defense to win games.

Texas is led by junior guard Matt Coleman III, who averages 12.3 points, 3.2 rebounds and 4.2 assists per game. In his last four games, he has scored 14 or more.

Sophomore guard Devon Dotson paces the Jayhawks offensively, averaging 18.2 points, four rebounds and 4.3 assists per game. He has scored 20 or more points in four of his last seven games and had 21 points, three assists and six rebounds in the win over Texas Tech.

Kansas Wins, But Can They Cover?

I struggle with this one because I do think that Kansas is clearly the superior team. But 15 points is a lot to cover, especially against a team the Jayhawks only beat by eight in their last matchup a couple of weeks ago. In fact, in its last five games, Kansas has only beaten a team by over 15 points once, an 81-60 win over Kansas State.

Still, the Jayhawks’ eight-point win against Texas was on the road, and they should get a significant bump playing at the Allen Fieldhouse. I wouldn’t blame you if you took Texas and the points given the recent stats, but for my money, I am taking the gamble and taking Kansas despite laying 15 points in this one.