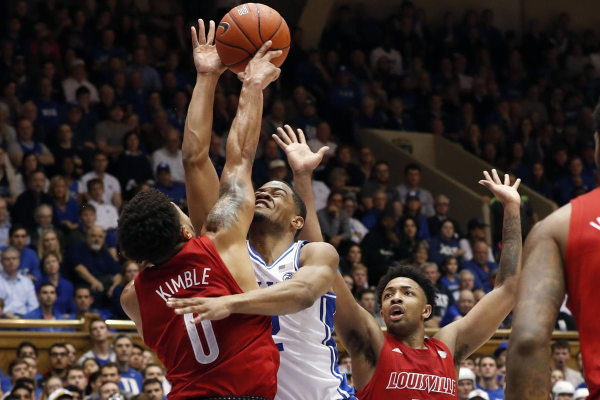 The Blue Bloods of college basketball will have their say come tournament time, but they’ve collectively struggled through a year in which top-ranked teams have fallen time and time again. This weekend was no different, as a slew of Top 25 squads came up short.

In total, eight ranked teams were defeated over the course of Friday and Saturday. As teams aim to better position themselves for postseason runs, this sort of January action will play a big part in which programs earn the higher seeds in March.

Falling On The Road

A tough weekend for ranked teams in college basketball began with a Friday primer as No. 19 Michigan headed on the road to take on unranked Iowa.

Although the Wolverines put up 83 points in the contest, they weren’t able to stop the Hawkeyes on their way to a 90-point performance. Three different Iowa players scored at least 20 points, led by the 33 points and seven rebounds of center Luka Garza.

The theme of ranked losers would continue with No. 20 Colorado, which looked inferior throughout a contest against unranked Arizona. The Buffaloes shot just 36.7 percent from the field, while Arizona put up 34- and 41-point halves to earn the 75-54 upset.

After a brilliant run of victories over ranked competition, the No. 21 Ohio State Buckeyes have now lost five out of their last six games. The most recent defeat came on Saturday when the Buckeyes traveled to Penn State.

Ohio State was destined for defeat after being outscored 42-27 in the first half, and even a 49-point performance in the second half couldn’t save the Buckeyes. Penn State earned an impressive 90-76 upset in this one.

The Shockers were playing a good Houston team that now sits with a record of 14-4, but they’ll be disappointed that they couldn’t keep up on their home floor. No. 16 Wichita State was unable to score 30 points in either half and ended up falling by a score of 65-54.

Although No. 12 West Virginia was on the road, it has no excuse for falling to a Kansas State team that’s under .500. While giving up 42 in each half, the Mountaineers doomed themselves with just 25 points in the first half of play.

In the end, Kansas State was too much to handle and upset West Virginia by a score of 84-68.

Of all the wild weekends of this college basketball season, this past weekend sticks out above the rest, as No. 3 Duke, No. 4 Auburn, and No. 5 Butler all fell. Another rankings shakeup is now on the cards.

The top five mayhem began with Butler visiting DePaul. The Blue Demons entered the contest with a record of 12-5, but Butler would have expected to control the contest. Instead, DePaul took a 10-point lead into halftime and never looked back.

Only two Butler players scored more than 10 points on the way to defeat, as a pair of DePaul starters reached 20 points or more. By a final of 79-66, the Bulldogs fell to the Blue Demons.

Going into the weekend, Auburn had only lost once this season. The Tigers have now lost twice in a row after falling to unranked Florida by a score of 69-47.

Although Auburn was only sitting on a five-point deficit heading into halftime, Florida blew the game open in the second half by outscoring the Tigers 41-24. No Auburn player had more than 10 points in the contest.

The best matchup of the weekend featured Duke hosting No. 11 Louisville. Led by the 24 points and 11 rebounds of Cassius Stanley, the Blue Devils kept the game close throughout.

However, not even a 41-point second half could bring Duke back from its 10-point halftime deficit. Duke became the highest-ranked team to suffer defeat this weekend, as Louisville got the better of the Blue Devils by a score of 79-73.