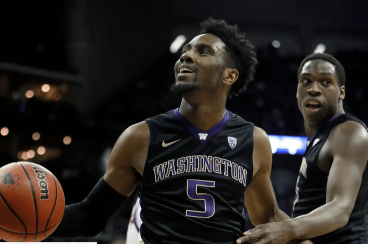 It is a PAC-12 showdown on Wednesday night when the Oregon State Beavers (17-11, 9-7 in the PAC-12) travel to the Alaska Airlines Arena to take on the Washington Huskies (23-6, 14-2 in the PAC-12). This will be the second time these two match up after the Huskies beat the Beavers on the road, 79-69, back on January 26th. In that game, Jaylen Nowell (19 points) and Nahziah Carter (18 points) led the way for the Huskies. In the loss, Stephen Thomson Jr. had a game-high 30 points for the Beavers. The two will match up again on Wednesday with tipoff scheduled for 10:00 pm ET.

Coming into this one, Oregon State has lost 3 of its last 4, including its last 2 in a row. They lost to Arizona 74-72 on Thursday and then again to Arizona State, 74-71, on Sunday. For the Huskies, they have won 4 of their last 5, but have shown signs of vulnerability. After losing to California 76-73 on Thursday, they squeaked by Stanford 62-61 on Sunday.

In this contest, the Washington Huskies come in as 7-point favorites playing at home. The over/under for this game is set at 131.5 points.

On the defensive side is where Washington makes its mark. They are currently allowing just 63.9 points per game, good for 23rd in the nation. Washington is especially good at creating turnovers. On the season, they are averaging 8.9 steals per game (13th overall). They also protect the interior well, ranking 2nd overall with 5.9 blocked shots per game (second to only Duke). Oregon State isn’t too bad, either. They are allowing 69.1 points per game to opponents, good for 117th.

Tied for 3rd in the PAC-12, the Oregon State Beavers look for the icing on the cake in a win over the top-ranked team in the conference—Washington. To do so, though, they will need to figure out a way to get more depth in scoring than they did in the first matchup.

Leading the way this season for the Beavers is junior forward Tres Tinkle. On the season, Tinkle is averaging 20.1 points on 48.3% shooting. In addition to his scoring, he is also averaging 8 rebounds, 4 assists and 1.6 steals per game.

In addition to Tinkle, the Beavers have two others averaging double-digits. Stephen Thompson Jr., the guard who went off in the first matchup, is averaging 16.2 points on 43.4% shooting. He is also averaging 4.4 rebounds, 3.4 assists, and 1.6 steals. Lastly is Ethan Thompson. On the season, Thompson is averaging 13.6 points, 5.1rebounds, and 3.6 assists.

Washington Trying To Add To Conference Championship At Home

With the regular season conference title already in hand, the Washington Huskies are looking to continue their strong play as tournaments begin to approach. Coach Mike Hopkins has his team playing well, especially on the defensive end, and is looking to keep that going at home on Wednesday.

Leading the way for the Huskies this season is sophomore guard Jaylen Nowell. On the season, Nowell is averaging 16.2 points on 50.7% shooting, including 44.2% from behind the arc. He is also adding 5.5 rebounds, 3.1 assists and 1.3 steals per game.

Aside from Nowell, David Crisp (12.6 points, 2.4 rebounds, 2.6 assists, 1.1 steals) and Noah Dickerson (12.5 points, 6.6 rebounds, 1 steal) have also had nice seasons on the offensive side. One of the most impressive stat lines comes from guard Matisse Thybulle, though. This season, Thybulle is averaging 9.7 points, 3.2 rebounds, 2.2 assists, and a whopping 3.4 steals and 2.2 blocks per game.

Washington Wins, But Can They Cover?

I really like Washington to win this one outright, but I am not sure if they cover the spread. The Huskies are 14-0 straight up at home, but just 9-4-1 against the spread. For Oregon State, they are 6-1-1 against the spread when playing on the road as underdogs. Like I said, I do see Washington winning this one, but I think the Beavers keep it closer than last time. For my money, I am taking Oregon State and the 7 points.