No. 12 Michigan State and No. 9 Wisconsin start off stacked Big 10 Christmas Slate 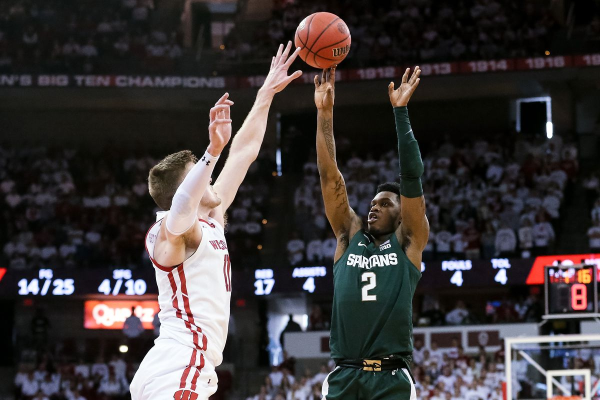 The Big Ten has taken over Christmas Day as a stacked slate of matchups is set to take place on the holiday, starting with a game between No. 9 Wisconsin and No. 12 Michigan State. The Badgers enter the game with a 7-1 SU record while the Spartans have a 6-1 SU record but will be looking to bounce back from an upset loss to Northwestern in their opening game of their Big 10 schedule.

FanDuel has Wisconsin set as a slight 1.5-point favorite with the total set at 139.5.

Michigan State off to a Disappointing Start for Bettors

Despite only losing one game so far this season, Michigan State has been off to a slow start from a betting perspective. They’re just 2-5 ATS this season, failing to cover the spread in four straight games. They were set as 7.5-point favorites against Northwestern in their most recent matchup, but ended up losing the game straight up by a score of 79-65.

The good news for them heading into this matchup is that they’ve had success covering the spread against Wisconsin in recent history. They’re 13-6 ATS in their last nineteen games against the Badgers which includes a 3-1 ATS run over their last four meetings.

This will be the second time each team will be facing a ranked opponent this season. Michigan State upset Duke, who was ranked sixth in the country at the time, on December 1st while Wisconsin pounded then No. 23 ranked Louisville 85-48 last week. Both teams also managed to cover the spread against their ranked opponent.

Wisconsin’s sole loss of the season came to unranked Marquette, losing a back-and-forth game by a final score of 67-65.

Badgers off to Strong Start Defensively

Wisconsin’s strength so far this season has been their defense. They rank 11th in the country in opponent FG percentage, holding teams to shooting just 36.2 percent from the field. They’re also 37th in opponent Floor percentage, keeping teams from scoring on 39.9 percentage of their possessions. If their defense comes to play against the Spartans, Tom Izzo’s squad will have trouble keeping it close.

Not only do they play great on the defensive side of the court, but the Badgers have managed to hold on to the ball and keep turnovers at a minimum. They turn the ball over on just 12.4 percent of possessions which is the third lowest rate among all teams. Michigan State hasn’t been near as good in this category as they rank 144th in turnovers per possession, coughing up the ball on 18.7 percent of possessions.

It may be tempting to bet on Michigan State against their conference rival, especially with their success against them in recent meetings, but Tom Izzo has gone on record saying that his team hasn’t played up to his expectations so far this season despite having just the one loss on their record.

In order to beat a team that is strong defensively and doesn’t turn the ball over, you have to be playing at the top of your game and the Spartans just haven’t quite shown that yet this season. This is to be expected for a team like Michigan State who has had a high turnover of players compared to last year’s squad. Meanwhile, Wisconsin has returned all of their starters from last season and their chemistry and understanding of their roles has proven invaluable early in the season.

If this game was taking place in February or March, a different outcome may be expected, but with how each team is playing right now Wisconsin has to be the bet to make in this Big 10 showdown.

If you’re looking to bet on the total, it’s hard to justify a bet on the OVER considering how dominant Wisconsin has looked defensively this season. Plugging your nose and taking the UNDER would be the recommended play.