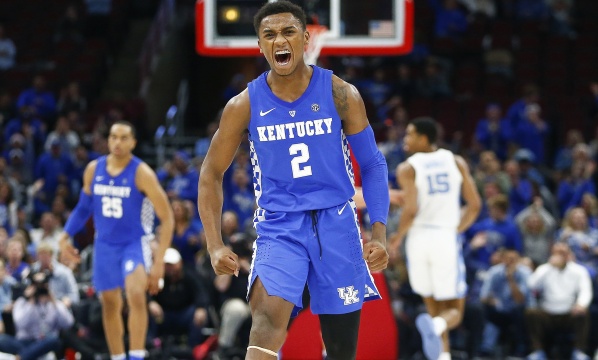 College basketball tips off across the country on Tuesday, but there are no games bigger than the doubleheader at Madison Square Garden in the Champions Classic. Following a battle between No. 3 Kansas and No. 4 Duke, we will be treated to the only the second meeting in men’s Division I history between the No. 1- and No. 2-ranked teams in the nation in both teams’ season opener. Here is a preview for No. 1 Michigan State against No. 2 Kentucky, which includes odds and a prediction.

At this point, fans know to expect a different Kentucky team every year. Gone are last season’s standouts, PJ Washington, Tyler Herro, and Keldon Johnson, all of whom were selected in the first round of June’s NBA Draft. But John Calipari is among the best coaches when it comes to rebuilding on the fly, as the Wildcats were once again able to recruit multiple freshmen who will contribute immediately.

Among the newcomers is Tyrese Maxey, a guard who stands 6-3 who has the scoring potential to lead Kentucky in points starting on day one. Another freshman to watch is forward Kahlil Whitney, who at 6-6 can be a strong presence in the paint but still has enough quickness to attack the basket.

Other freshmen like guard Johnny Juzang and forward Keion Brooks Jr. will be a part of Calipari’s rotation. Kentucky also brought in Bucknell transfer Nate Sestina, who averaged just under 16 points last season and will be a solid stretch forward for the Wildcats.

Surprisingly, Kentucky also has some returning players who will be relied upon this year. Ashton Hagans returns for his sophomore season and is the lone starter from last year still on the team. Hagans averaged 7.7 points per game and 4.3 assists as a freshman and looks to be the floor general for this talented but young team.

Sophomores Immanual Quickley and EJ Montgomery, as well as junior Nick Richards, were all role players last season and will likely have more significant roles this year.

As far as stats go, Kentucky was one of the nation’s top defensive teams last season, ranking in the top 30 in both scoring defense and field-goal defense. They had a top-100 offense that averaged 75.8 points per game but were among the country’s worst three-point shooting teams, averaging just under six threes per game.

Tom Izzo’s Michigan State Spartans are the preseason No. 1 teamfor the first time in program history, and it’s easy to see why. The Spartans, who are fresh off a trip to the Final Four, lost Kenny Goins, Matt McQuaid, and Nick Ward, all of whom were big contributors last season. But the Spartans return most of their team, including their leading scorers from last season, while also adding a couple of youngsters who are ready to take over for the departed players above.

No matter who the opponent is, there’s a good chance Michigan State will have the best player on the court every night in Cassius Winston. The senior point guard and reigning Big Ten Player of the Year averaged close to 19 points per game and 7.5 assists last season, showcasing an ability to score from anywhere and run the offense.

Joining him for another go-around is junior forward Xavier Tillman, who will be the centerpiece of Michigan State’s low-post attack. The Spartans also return guard Aaron Henry and forward Gabe Brown from last year’s group, as well as swingman Kyle Ahrens. Not to mention, MSU’s second-best scorer, Joshua Langford, will hopefully return sometime in January after suffering a couple of leg injuries over the last year.

Among the newcomers, Rocket Watts will possibly insert into the starting lineup to replace McQuaid. Watts is a combo guard who at 6-2 can back up Winston at point guard or start alongside him. Power forwards Malik Hall and Julius Marble are new recruits entering the fold as well, hoping to provide depth along the wing and in the paint for the Spartans.

Michigan State opens at -2.5, a slight favorite over another great team in Kentucky that can win a national championship. I’m going with the Spartans to win this one. While there’s a lot to like about the Wildcats, guarding Winston will be too much to handle for the freshman Maxey. In addition, the Spartans bring back most of their team, while Kentucky will need some time to adjust to all of the new faces once again. Give me Michigan State -2.5.