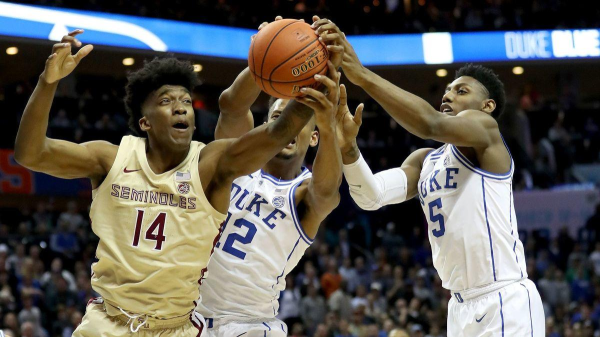 Technically, the NCAA Tournament got underway last night, but we all know the real thing starts on Thursday when the field sits at 64 teams. In the meantime, let’s catch up on all of the news that’s happened in the college basketball world over the past week, from important injury news to coaches getting canned and everything in between.

After an extended absence, Virginia Tech is going to get senior point guard Justin Robinson back from injury just in time for the start of the NCAA Tournament. Robinson hasn’t played since the end of January, missing Tech’s last 12 games. The Hokies managed to go 7-5 without him and secure a no. 4 seed, but to make a serious run, they need their senior leader back on the court. The only question is how sharp he’ll be after missing over six weeks of action.

Kansas State is likely to begin the NCAA Tournament without second-leading scorer Dean Wade, who is officially listed as doubtful with a foot injury. Wade “tweaked” his foot on several occasions late in the season and didn’t play in the Big 12 Tournament. Without Wade for most of the tournament last season, the Wildcats still reached the Elite Eight. However, that doesn’t mean they want to begin this year’s tournament without the 6’8’’ power forward. Kansas State, the 4 seed in the South, plays their first-round game Friday against 13 seed UC Irvine.

Just a couple of days before starting their NCAA Tournament run, Kentucky forward PJ Washington was wearing a walking boot. The school has not disclosed the injury and has stated that Washington is wearing it “as a precaution.” Nevertheless, it’s no doubt disconcerting for the Wildcats to have their leading scorer and rebounder be less than 100% healthy heading into the tournament. If Kentucky takes care of Abilene Christian on Thursday, they could face a tough test on Saturday against either Wofford or Seton Hall if they hope to reach the Sweet 16.

The LSU Tigers will play Yale Thursday afternoon without head coach Will Wade on the sidelines. Wade remains suspended by the university for his connection to FBI’s investigation into college basketball corruption. Despite his pleas for the school to lift the suspension before the tournament, Wade remains away from the team. However, the Tigers got some good news when freshman Javonte Smart was allowed to rejoin the team ahead of last week’s SEC Tournament. Smart was the player Wade discussed in the FBI wiretaps that landed him in trouble but the freshman has been cleared of any wrongdoing. He averaged 11.5 points per game, making him the team’s fourth-leading scorer and a key figure for the 3 seed Tigers.

When the selection committee released the bracket on Sunday, the Duke Blue Devils were the top overall seed. However, the folks in Vegas have taken things a step further, pronouncing Duke as heavy 2-1 favorites to win the tournament. The Blue Devils are the heaviest favorites since the 2015 Kentucky team that started the tournament undefeated before losing in the Final Four. Virginia has the next best odds at 6-1, while fellow 1 seeds North Carolina and Gonzaga are both at 8-1. If someone other than Duke wins the tournament, bookmakers will end up winning a majority of the money bet on this year’s tournament.

After 34 years as head coach at Saint Joseph’s, Phil Martelli was let go on Tuesday. The 64-year-old took over coaching duties at the Philadelphia school in 1995. However, the school let him go after being at or below .500 in three straight seasons. Martelli took the Hawks to the NCAA Tournament seven times during his tenure, most recently in 2016. He’s best known for leading the 2003-04 Saint Joseph’s team to a 27-0 record to start the season, ultimately reaching the Elite Eight.

While Martelli was the longest-tenured coach to be fired following the season, he was by no means the only one. Here is a rundown of the other notable coaches who were relieved of their duties this past week:

Texas A&M fired Billy Kennedy after eight seasons with the Aggies. A year ago, Kennedy had A&M playing in the Sweet 16 for the second time in three years. But he couldn’t survive this year’s 14-18 campaign.

Mike Dunleavy Sr.’s move into the college game is officially a bust. The longtime NBA coach was fired by Tulane after three seasons. The Green Wave went 4-27 this season, including 0-18 inside the AAC.