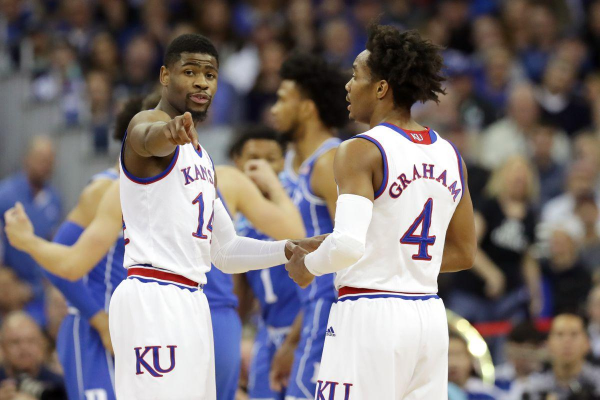 As we move into the conference season, only three teams remain undefeated: Virginia, Michigan, and Houston. Nevada would have seemed like a decent bet to stay undefeated after surviving their non-conference scheduled without a loss. However, they suffered a puzzling loss to New Mexico over the weekend.

Virginia and Michigan have both looked the part of elite teams to this point in the season. However, both will face plenty of difficult games during their conference season. But it could be a different case with Houston. The Cougars have wins over Oregon, Oklahoma State, and LSU on their resume, so they’ve proven that they can beat quality teams. Of course, the American conference is no cake-walk, so they’ll face plenty of teams that are capable of knocking them off.

The Kansas Jayhawks suffered a huge blow this week when they learned that Udoka Azubuike will miss the rest of the season with a torn ligament in his right hand. The junior missed the second half of his freshman season with a similar injury in his left hand. Azubuike missed Saturday’s loss to Iowa State after hurting the hand Friday in practice. The 7’1’’ center also missed four games earlier this season due to an ankle injury. The Jayhawks are just 3-2 without him. Without Azubuike, Kansas loses a lot of size and strength inside that will be nearly impossible to replace. He was averaging over 13 points and nearly seven rebounds per game.

Oregon is in a similar position with freshman sensation Bol Bol out for the season due to a stress fracture in his foot. Bol is a 7’2’’ center and the son of former NBA player Manute Bol. He confirmed this week that he won’t be fully healthy before the end of the season and that he will declare for the NBA draft, ending his college career after nine games. Before the injury, Bol was averaging 21 points, 9.6 rebounds, and 2.7 blocks per game. He was easily Oregon’s most impactful player this season. The Ducks are 3-2 since losing him, including a loss in their Pac-12 opener to Oregon State. Needless to say, Oregon is in quite a lot of trouble without him.

The Miami Hurricanes are in need of a little help, but they won’t be getting it from junior guard Dewan Hernandez (formerly known as Dewan Huell). The NCAA has declared Hernandez ineligible after his name appeared in court documents relating to agent runner Christian Dawkins and the FBI’s investigation into corruption in college basketball. Miami could make one final appeal, although it’s also possible that Hernandez will turn pro and try to find a job overseas before next summer’s NBA Draft.

The 6’11’’ Hernandez was Miami’s best big man last season, averaging over 11 points and nearly seven rebounds per game. With freshman Deng Gak suffering a season-ending knee injury, the Hurricanes are lacking size and productivity in the frontcourt. Miami is down to a 7-man rotation and is just 8-6 on the season. They have lost their first two ACC games of the season and could be heading for a nightmare of a season in such an unforgiving conference. If they could somehow get Hernandez back, it would be a massive lift.

Oklahoma State will go through the rest of the season without guard Mike Cunningham. The grad transfer from South Carolina-Upstate has decided to leave the program. He played in seven games, averaging eight points per game, but has been absent from the team’s last five games. The Cowboys should have enough backcourt depth to survive without Cunningham. They also upset Texas at home on Tuesday. However, Oklahoma State is still just 7-8 on the season.

USC sophomore Jordan Usher has officially left the program and will transfer to Georgia Tech. Usher hasn’t played since before Christmas and was averaging 8.6 points per game for the Trojans. This appears to be a classic case of homesickness, as Usher grew up less than an hour from Atlanta and the Georgia Tech campus. He will have to sit out a full season and will be eligible to play for the Yellow Jackets next December.