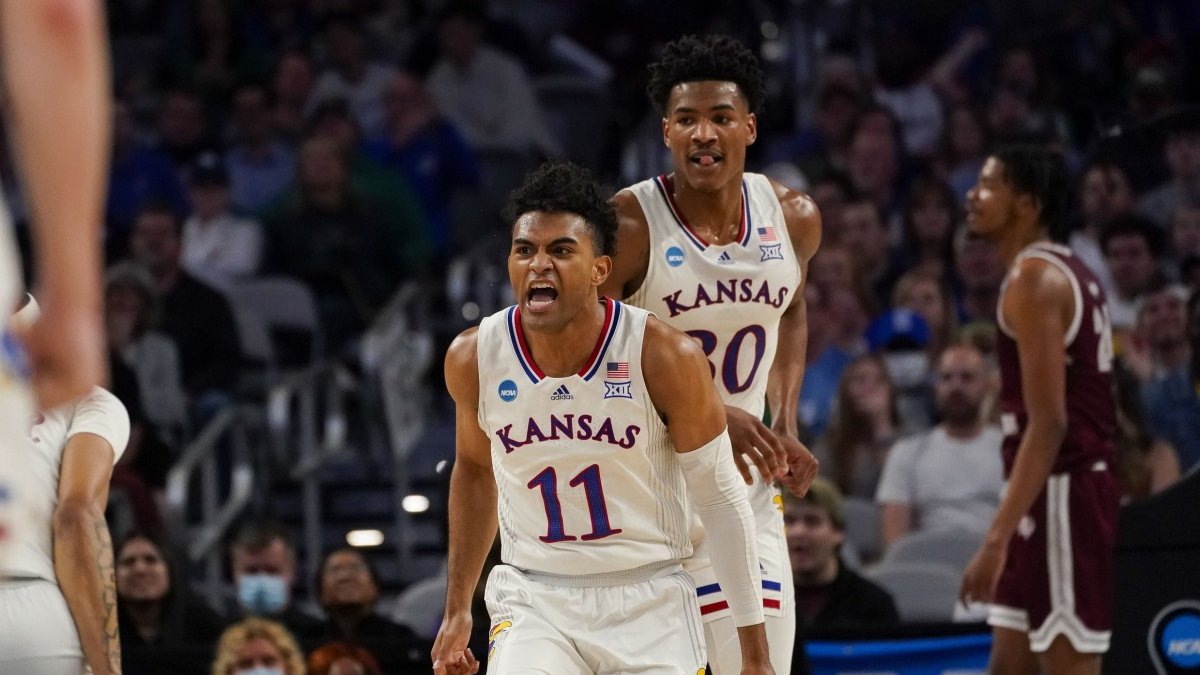 With the likes of Gonzaga and Baylor suffering earlier-than-expected NCAA Tournament exits, Kansas has become the favorite to cut down the nets in New Orleans on April 4. But to book their ticket to NOLA, the Jayhawks will have to tackle a tough Miami team in the Midwest Regional final.

With their win over Providence in the Sweet 16 on Friday, Kansas secured a 23rd trip to the Elite Eight of the NCAA Tournament, with 16 of those trips coming since the tournament expanded to 64 teams in 1985.

This is Miami’s 11th appearance in the Big Dance, but Friday’s matchup with Iowa State was only the fourth time they had reached the Sweet Sixteen. And their 70-56 win over the Cyclones took the Hurricanes to previously uncharted territory.

In 2006, current Miami coach Jim Larranaga led George Mason to the Final Four as a #11 seed, with the Patriots toppling #1 seed UConn to reach the Final Four in Indianapolis in one of the biggest March Madness upsets in history. That year marked one of only three times in the era of seeding that no #1 seeds made it to the Final Four (1980, 2006, and 2011).

With Baylor, Gonzaga, and Arizona already eliminated, Kansas is the final top seed remaining. Will they continue their run of success in getting to Final Fours in New Orleans?

Will the Jayhawks Ride Remy’s Resurgence to New Orleans?

It may have taken until March, but Remy Martin is doing Remy Martin things, and it has Kansas three wins away from the program’s fourth national championship.

The Arizona State transfer scored 15 points in the first round against Texas Southern, set his season high with 20 points against Creighton in the second round, then eclipsed that season high with 23 in Friday’s 66-61 win over Providence. That marked the first time Martin scored 23 or more points since February 27, 2021, when he scored 23 for the Sun Devils in an overtime win over Washington State.

Remy Martin in the 2022 NCAA Tournament

Martin has scored in double figures in five straight games, the first time he has done that this season. With 13 points against Miami, Martin will hit 2,000 career points. When a guy who can score like he can is scoring like he is right now, you have to like your chances against any opponent.

The Jayhawks’ chances of beating Miami and going all the way in New Orleans will be even higher if Martin’s continued production is accompanied by a return to form for Ochai Agbaji.

Agbaji’s shooting percentages are still all career highs across the board–46.7 percent overall from the field, 39.2 percent from three, and 77 percent from the free-throw line–and so is his scoring average of 18.9 points per game.

But over his past ten games, Agbaji has hit 46.7 percent or better from the field only twice. In the NCAA Tournament, he has yet to shoot well, and he was held to a season-low five points against Providence on 2 of 8 shooting. It was only the second time this season that he has been held to single digits, with the other an eight-point game in the overtime win over Texas on Senior Day.

Ochai Agbaji in the 2022 NCAA Tournament

Based on results throughout the season, Agbaji is set to have a big bounce-back against Miami.

After that performance against Texas on March 5, he scored 18 and 22 against West Virginia and TCU in his first two Big 12 Tournament games.

After being held to only 10 points against Oklahoma on January 18, he went for 29 against Kansas State in the next game.

Friday’s game was just the ninth time in 36 games this season that Agbaji was held below 15 points. In the following game the previous eight times, his scoring average comes out to 18 points per game, with three 20-point games in the bunch.

While he hasn’t been on target in the NCAA Tournament, it is encouraging that, after recording five turnovers in back-to-back games against Texas Tech and Texas Southern, he had one each against Creighton and Providence. And after getting into foul trouble against Creighton, he had only one foul against Providence.

Also, he has impacted the game in other ways even with his shots not falling. Against Texas Southern, he had six rebounds. Against Creighton, he had eight rebounds, three assists, and two steals. And against Providence, he had four rebounds, four blocks, and two steals.

If Martin continues his scoring run and Agbaji finds his shot, it puts the onus on Miami’s scorers to continue getting it done.

Leading Scorers for Miami in the 2022 NCAA Tournament

McGusty led the way against Iowa State with 27 points, while Wong and Moore–a former Jayhawk who played in 35 games with Kansas in the 2018-19 season–each scored only seven points. But Moore had nine assists, and where he and Wong didn’t score as much, McGusty more than did his part, and Jordan Miller (16 points) and Sam Waardenburg (13 points) picked up the slack.

Miami has been excellent defensively in the NCAA Tournament, allowing 66, 61, and 56 points against USC, Auburn, and Iowa State.

Can they stifle Kansas like they did Auburn? Though both Auburn and Kansas are two of college basketball’s highest-scoring teams, the Jayhawks shoot much better than the Tigers.

Along with being only the fourth time all season that Kansas has made under 40 percent from the field, that was a season low in threes and only the seventh time they hit five or fewer threes.

If the Jayhawks perform as they have after other similar performances, Miami might be in trouble.

Kansas has a rough record in the Elite Eight under Bill Self, winning only three of eight previous regional finals in his tenure.

But the Jayhawks love an end-of-season trip to New Orleans, having made the Final Four the previous three times it was in NOLA, and Martin, Agbaji, and this group of Jayhawks will keep that streak going.

The 2022 French Open is underway at Stade Roland Garros in Paris, France, and we are already almost through the first week of play. Tomorrow, the remaining third-round matches will take place, after which the men’s and women’s singles draws will be down to their final 16 contenders. In both men’s and women’s singles, there END_OF_DOCUMENT_TOKEN_TO_BE_REPLACED